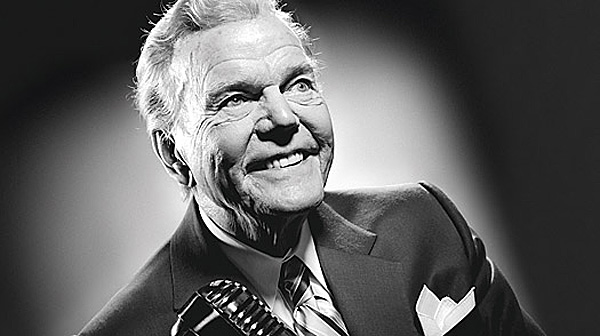 Radio legend Paul Harvey, who has been voiceless for three months this year, is crediting God with healing him in order to broadcast an important message to Americans regarding the war on terror.

"Americans, this is the testing time, and we are at our virtuous best," the 83-year-old journalist told the nation on his "News and Comment" program Thanksgiving weekend. "America is falling in love again with America."

Based in Chicago, Harvey has been a mainstay of U.S. broadcasting for over half a century. His trademark "Good day!" greeting is heard on some 1,200 radio stations across the nation and on 400 Armed Forces Radio stations around the world, reaching approximately 24 million listeners daily. ''Reaganomics,'' and ''guesstimate'' are among the words and catch phrases he coined over the years.

But in May, the host who had never missed a broadcast for health reasons, fell silent from the nightmare of all broadcasters – lack of any voice.

"At first I imagined that being able to sleep past 3:30 in the morning would be a luxurious indulgence," Harvey said. "Well, that enjoyment lasted exactly two mornings, after which from 3:30 on I lay wide awake wanting to be with you."

The ailment kept him completely mute and off the air through most of the summer, as he sought treatment at the Mayo Clinic in Rochester, Minn. Harvey was diagnosed with a virus with no set time for recovery, while substitutes filled in for him on the air.

"Inescapably, I was haunted by the possibility that I might not broadcast again," he said.

Miracles of God are a reality! Find out details about the ones you know, and the ones you don't in "Shocked by the Bible: The Most Astonishing Facts You've Never Been Told"

Many friends including fellow broadcasters Mike Wallace of CBS and ABC's Sam Donaldson – both of whom had endured their own periods of voicelessness – called Harvey to provide encouragement. "Don't let anyone touch those vocal cords with a knife," Harvey was admonished.

The broadcaster was told he should feel fortunate, because sometimes the virus attacks the eyes. "Well, I was grateful, but I did not consider myself fortunate," he said.

Ironically, Harvey's voice problems came in the same general time period that another American radio giant, Rush Limbaugh, began to lose his hearing. Limbaugh has since announced on his daily show that he's gone deaf, and still continues to host his program.

In Harvey's on-air explanation of his absence, he said he was invited to speak at a Salvation Army event in Cincinnati, but sought to be excused due to his voice problem. The organization, though, had sold thousands of tickets, and asked him just to show up to the event without having to utter a word.

"I'll never forget the delegation who met my plane," said Harvey. "I was unable even to return their greeting."

On the tarmac of the airport, Harvey recounted how Salvation Army Maj. Philip McMichael led a prayer with his colleagues for the speechless newsman. "Lord, we know something good will come from Mr. Harvey's silence."

"Well, by George, something good did," Harvey continued. He says over the ensuing days, an epiphany taught him a new way to pray.

"You remember Jesus had prescribed for his disciples a perfect prayer, the essence of which is 'Thy will be done.' My prayers so often had been a shopping list of things I wanted to be done, and I began to pray for what He wanted.

"And doors began to open. I was led to a voice specialist. An outpatient procedure reinforced a weakened muscle alongside a vocal cord and within minutes, the voice which had been mostly mute for weeks came back to life."

The experience is making Harvey appreciate his daily visits with listeners much more now, and he thanked his longtime sponsors who did not abandon the program during his hiatus.

But the miraculous cure is hardly the end of Harvey's tale. And now, as the plainspoken Midwesterner would say – the rest of the story.

"Sentenced to silence, I had to confront the possibility that I would not be back on the air ever, and I was not ready for that," Harvey said. "There were a few more footprints that I had hoped to leave behind for my [journalism] colleagues, especially the very young ones."

Having returned to the microphone in late August, he calls it fortuitous that his rusty pipes were renewed in time to help put Sept. 11 in perspective.

"We remember the Crash of '29, and the Dustbowl of the '30s and Hitler's Holocaust and Dien Bien Phu and Saddam Hussein," Harvey began his analysis, referring to himself as a professional observer for several lifetimes.

"During each test, some Americans feared that our country was going to hell. Well, it did not. It went through a little hell, but it came out of the crucible a little heat-tempered and stronger than before."

Harvey then set his sights on the Taliban. "Osama bin Laden epitomizes for this generation what we called hippies or flower children in the last generation. These anti-establishment unwashed counterculture rich kids have hijacked Islam for their personal aggrandizement."

He explained how mature, experienced Americans have already been there and done that, and that crisis handling was nothing new. "Since 9-11 of this year, Osama bin Laden has been utterly confounded. The victims have displaced the victimizers."

Harvey says the suicidal hijackings have aroused a patriotic and humanitarian spirit that was not obvious in recent years. "New Yorkers of all people are smiling at strangers, and honking their horns less, and giving people more of themselves and their resources. ...

"Americans are pledging allegiance again, soldiers are saluting again, college-agers are taking baths again, and the kids are coming home."

Harvey concluded by focusing on the brighter side of events, stressing that storms are part of life's normal climate, and that Americans need to learn to ride them.

"Don't let noisy news distress you, don't let the headline writers rain on your parade," he said. "My goodness, there's resiliency in this country we've not yet begun to use."