One of the reasons for the ascendance of the English-speaking world has been that the English language is almost alone among major languages in having the word "earn."

Those of us whose native language is English assume that the phrase "to earn a living" is universal. It isn't. It is almost unique to English. Few languages have the ability to say this.

In the Romance languages, for example – a list that includes such major languages as Spanish, French and Italian – the word used when saying someone "earns" money, is "ganar" in Spanish, "gagner" in French. The word literally means "to win." In Hebrew the word "marveach" means "profits." In German, the word "verdient" means "deserves."

Obviously, it is very different to "win" or to "deserve" or to "profit" than to "earn."

Since the 1960s-'70s, a concerted effort has been made to weed the word, and therefore the cultural value, of "earning" from American life. Increasingly little is earned. Instead of earning, we are increasingly owed, or we have more rights, or we are simply given.

Many American kids no longer earn awards or trophies for athletic success. They are given trophies and awards for showing up. These trophies are not earned, just granted – essentially for breathing.

Another increasingly widespread concept that undermines the notion of earning is "unconditional love." The term, which was barely used prior to the 1960s, is now ubiquitous. It is a prominent goal, a human ideal to strive for. The idea of having to earn love is more than unheard of today; it would strike most moderns as morally suspect.

We expect God to show unconditional love to all people, again no matter how they act. According to the doctrine of divine unconditional love, God loves sadists as much as He loves the kindest individuals. No one earns God's love; we receive it, like sports trophies, for breathing. Many fine people believe this about God, but I think it is religio-cultural-specific, and non-biblical. In 15 years of study in a yeshiva I had never heard the phrase, and it would have struck me, as it still does, as quite odd. It depicts God as a love machine who, like an air-conditioner that emits the same amount of cold air no matter how the inhabitants of a house act, emits the same amount of love no matter how we act. It means that we in no way influence God's love for us. I don't find that comforting. And it is certainly no more likely to induce decent behavior in human beings than a God who does show conditional love based on human decency.

Learn what many churches have de-emphasized – the Jewish origins of Christianity – with "Yeshua/Jesus: Exploring the Jewish Roots of Jesus"

We also expect forgiveness to be given without being earned. Many people believe in what I call automatic forgiveness – the obligation to forgive anyone any crime, committed against anyone, no matter how many victims and no matter how removed from my life. Thus the pastor of a church attended by then-President Bill Clinton told the president and all others at a Sunday service that all Christians were obligated to forgive Timothy McVeigh, the terrorist murderer of 168 people. Did McVeigh earn this forgiveness? Of course not. So where did the notion of unearned forgiveness come from, especially unearned forgiveness from people who were not the victims of the evil being forgiven? It is one thing for me to forgive those who have hurt me; it is quite another for others to forgive those who have hurt me. God Himself demands that we earn forgiveness. The term for that is repentance. No repentance, no forgiveness.

Finally, the increasingly powerful culture of entitlement and rights further undermines the value of earning anything. The more the state gives to its citizens, the less they have to earn. That is the basic concept of the welfare state – you receive almost everything you need without having to earn any of it. About half of Americans now pay no federal income tax – but they receive all government benefits just as if they had paid for, i.e., earned, them.

America became a great civilization thanks to a culture based on the value of having to earn almost everything an American got in life. As it abandons this value, it will become a mediocre civilization. And eventually it will not be America. It will be a large Sweden, and just as influential as the smaller one.

Dennis Prager
Dennis Prager is a nationally syndicated radio talk-show host and columnist. His latest book, published by Regnery in April 2018, is "The Rational Bible," a commentary on the book of Exodus. He is the founder of Prager University and may be contacted at dennisprager.com.
Why are they capitalizing 'Black'?
The left's moral compass isn't broken
Leftists blame America. decent people blame themselves
The lockdown has gone from a mistake to a crime
A demagogue named Barack Obama: His DNC speech
See more... 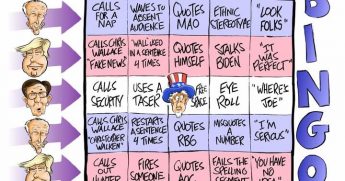 Police raid in Vietnam finds more than 300,000 used condoms being packed for resale