The media have dredged up medical, military, college and detailed records for Republican and Democratic Party candidates in at least the last five elections. Candidates were subject to intense scrutiny of their health conditions, academic performance and military careers.

However, while such private information about other candidates was divulged, more than 440,000 concerned citizens still have yet to see President Obama present his elusive "long-form" birth certificate and several other documents that remain unreleased or otherwise blocked from the public eye.

As WND has reported, Obama has not released his long-form birth certificate, college transcripts, Harvard Law Review articles, scholarly articles from the University of Chicago, files from his years as an Illinois state senator, Illinois State Bar Association records or his adoption records.

Want
to turn up the pressure to learn the facts? Get your signs and
postcards asking for the president's birth certificate documentation
here.

Nearly every candidate since the 1992 election has released detailed medical records. However, Barack Obama, a relatively young candidate who was said to have been in "excellent health," refused to release his own. Instead, he simply provided a six-paragraph note from his physician briefly summarizing 21 years of doctor visits and health information.

Medical records: During his first presidential campaign in 1999, Sen. John McCain released 1,500 pages of medical and psychiatric records collected by the Navy. In 2008, McCain allowed reporters to spend three hours sifting through 1,200 pages of health records.

Military records: The Navy released John McCain's military record after a Freedom of Information Act request from the Associated Press. The record lists McCain's medals and commendations, including a Silver Star Medal for resisting "extreme mental and physical cruelties" inflicted upon him after he was taken prisoner in October 1967 by the North Vietnamese.

"My GPA earned me fifth-from-the-bottom-of-my-class status, but since that was in the Coolidge administration, it was a different measurement," McCain joked during a college appearance. "But I can assure you that by today's standards it would be barely passing."

Thesis: The New York Times released a copy of John McCain's 1974 thesis at the National War College. Titled "The Code of Conduct and the Vietnam Prisoners of War," it was written about a year after his release from a North Vietnamese prison camp.

Divorce: The Associated Press thoroughly examined records from Sen. John McCain's divorce from his first wife, Carol Shepp, a model from Philadelphia. The news agency listed a detailed summary of the settlement, revealing that McCain gave up two homes and agreed to pay $1,625 a month in alimony and child support. According to the report, he maintained insurance policies worth $64,000 with their children as beneficiaries, agreed to pay for their daughter's college education and paid $3,005 in joint debts. Carol McCain got the family's Audi, while McCain kept a Datsun 810 and personal belongings. McCain also agreed to provide insurance or pay for medical treatment for his ex-wife.

Passport: John McCain has not released his passport files, documents that contain sensitive personal information including place and date of birth, Social Security number, parent citizenship information, marital status and travel records. However, his files were improperly accessed along with then-Sens. Barack Obama and Hillary Clinton in early 2008.

McCain's office released a statement saying: "The U.S. government has a responsibility to respect the privacy of all Americans. It appears that privacy was breached and I expect a thorough review and a change in procedures as necessary to ensure the privacy of all passport files."

According to the State Department, passport files are protected by the Privacy Act of 1974, (5 USC 552(a)). Third-party requests for passport files must be accompanied with a notarized consent from the owner of the passport records, proof of guardianship, a death certificate or a court order signed by a judge of "competent jurisdiction requesting the Department of State to release passport records."

Medical records: President George W. Bush allowed the media to view about 400 pages of personal medical information in 2000 and again in 2004.

Birth certificate: While the Texas State Library and Archives Commission lists a birth certificate for George W. Bush among its records, the document has not been posted online.

George W. Bush's record of service in the National Guard, including payroll and personnel reports, flight records and photos, is available through the Department of Defense.

Arrest record: The media also released copies of Bush's arrest record, including one 1976 incident in which he was charged for driving under the influence of alcohol when he was 30 years old. Reports included a summary of his DUI conviction from the Maine Department of Motor Vehicles.

College records: Bush's campaign posted a copy of his Yale transcript online. The Washington Post obtained his SAT scores and revealed that he earned a 1206 on the college admissions test. Bush's lowest grades were a 70 (of 100) in Sociology and a 71 in Economics, while his highest scores were in history and Japanese.

College records: In June 2005, the Boston Globe divulged Kerry's transcript information from his undergraduate record at Yale. It revealed that Kerry had a cumulative grade average of 76 over four years in school. His freshman year average was 71 and his senior year average was 81.

Divorce records: John Kerry and Julia Stimson Thorne, Kerry's first wife, were separated in 1982 and divorced in July 25, 1988. The Associated Press revealed details from records of John and Julia's "no fault" divorce, citing generic grounds of ''irretrievable breakdown of the marriage."

Medical records: In 1999, Al Gore released medical records revealing "mildly elevated" cholesterol levels and removal of skin cancer from his forehead in 1997. The records were compiled after a complete physical examination by several military physicians.

Military records: Gore enlisted in the Army in Newark, N.J., in August 1969. He was stationed in Fort Rucker as a public affairs officer. At the end of 1970, Gore went to Vietnam as a military journalist assigned to the 20th Engineer Brigade at Bien Hoa, 20 miles northeast of Saigon. He applied for discharge and exited the Army in May 1971. His discharge paperwork is not available online.

College records: The Washington Post obtained Al Gore's college transcripts and test scores from St. Albans high school, Vanderbilt University's divinity and law schools and Harvard University. It outlined his scores in a March 19, 2000, article titled, "Gore's grades belie image of studiousness." The newspaper revealed Gore earned a total of 1355 points of 1600 on the SAT college admissions test. Gore's lowest grade was a D in natural sciences. His high grades were an A in French and English, an A in visual and environmental studies and an A- in social relations.

WND was unable to find an online copy of Gore's 84-page senior thesis titled, "The Impact of Television on the Conduct of the Presidency, 1947-1969." However, the New York Times outlined his argument in a July 16 article.

Medical records: Former President Bill Clinton released only summaries of his annual physical examinations, including his cholesterol count, his pulse rate, his blood pressure and his hemoglobin and white blood cell and platelet count. According to the New York Times, then–White House spokesman Michael D. McCurry said he saw ''no reason'' not to disclose more information, ''given the President's overall health.''

College records: Clinton majored in international affairs at Georgetown University in Washington, D.C., and was awarded a Rhodes Scholarship to the University of Oxford in England. He received a law degree from Yale University in 1973, and entered politics in Arkansas. While his scores were presumably high, copies of his transcripts are not available online.

Passport: Bill Clinton did not release his passport files, documents that contain sensitive personal information including place and date of birth, Social Security number, parent citizenship information, marital status and travel records. However, his files were breached during an improper search by State Department officials in 1992.

Medical records: In July 1995, presidential candidate Robert Dole released a detailed summary of his medical records. His doctor told the media that he had received serious wounds in World War II that paralyzed his right arm and led to the removal of one kidney. He also underwent surgery in 1991 for prostate cancer. He made all of his medical records public in 1996 and demanded that Bill Clinton do the same.

Military records: Dole's campaign released details about his military service in an entry titled, "World War II: Heroism and Tragedy" on its website. A retired Central Intelligence Agency officer scrutinized his war record in a profile published by The Nation in August 1996.

Medical records: George H.W. Bush released medical records during his campaign and yearly during his presidency, revealing he had mild degenerative osteoarthritis in his hips, normal X-rays, EKG, urinalysis and blood work.

There has been a great deal of debate about whether candidates should be required to release personal records, including medical documents, when they run for president. During the most recent election, Sen. Charles Schumer, D-N.Y., made the following statement about transparency:

A video of Schumer's comment can be seen below:

'Transparency' in the Obama administration

While most candidates have not been asked to publicly display their long-form birth certificates before elections, the document received widespread publicity during the 2008 election when questions about natural born citizenship status of both major party candidates was called into question.

The Constitution, Article 2, Section 1,
states, "No Person except a natural born Citizen, or a Citizen of the United
States, at the time of the Adoption of this Constitution, shall be eligible to
the Office of President."

In May 2008, the Senate unanimously declared McCain a natural born citizen, eligible to run for president. However, President Obama has still not provided simple, incontrovertible proof of his exact birthplace. That information would be included on his long-form, hospital-generated
birth certificate which Obama has steadfastly refused to release amid a
flurry of conflicting reports.

Some of the lawsuits question whether he was actually
born in Hawaii, as he insists. If he was born out of the country, Obama's
American mother, the suits contend, was too young at the time of his birth to
confer American citizenship to her son under the law at the time.

Other challenges have focused on Obama's citizenship
through his father, a Kenyan subject to the jurisdiction of the United Kingdom
at the time of his birth, thus making him a dual citizen. The cases contend the
framers of the Constitution excluded dual citizens from qualifying as natural
born.

Complicating the situation is Obama's decision to spend
sums estimated in the hundreds of thousands of dollars to avoid releasing a
state birth certificate that would put to rest all of the questions.

The key question in the dispute also is being raised on billboards nationwide.

They are intended to raise public awareness of the fact
that Obama has never released the standard "long-form" birth certificate that
would show which hospital he was born in, the attending physician and establish
that he truly was born in Hawaii, as his autobiography maintains. 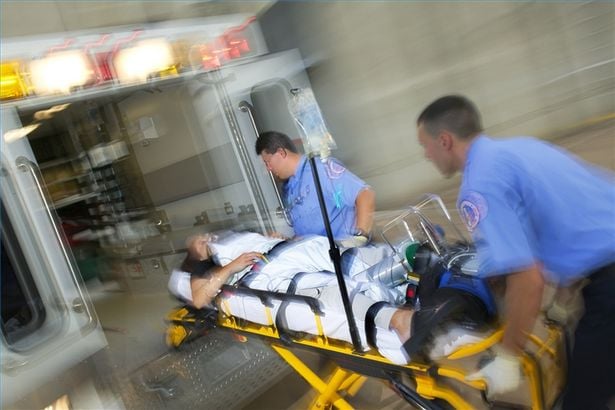 Border town's only hospital on brink of collapse caring for migrants