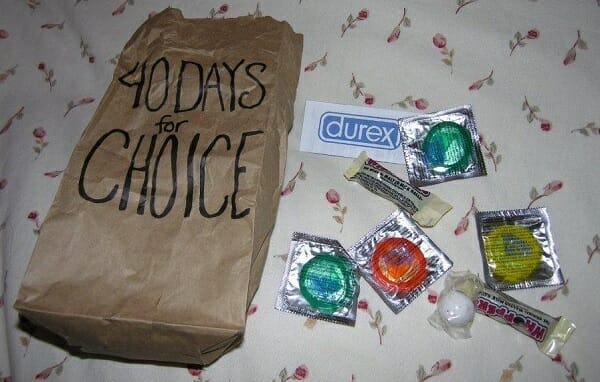 Condoms and other sexual items given to children by the staff of abortionist LeRoy Carhart in Germantown, Md. on Halloween 2011. The children went with their parents to pray for unborn babies in danger and the conversion of Carhart and his staff.

GERMANTOWN, Md. – It was Halloween, and pro-life singles and families were praying outside the Germantown, Md., abortion business of LeRoy Carhart when two of his staffers handed little children bags of "treats."

But inside were not the typical chocolate or bubble gum enticements. There were condoms.

Before opening his own late-term abortion shops of horror, Carhart worked for the late partial-birth abortionist George Tiller in Wichita, Kan.

Later, when he was trying to protect his lucrative abortion business in Nebraska, Carhart filed lawsuits against the state's partial-birth abortion ban, then the federal Partial-Birth Abortion Ban Act of 2003.

In 2007, the Supreme Court upheld the federal ban in a case called Gonzales v. Carhart – but Justice Anthony Kennedy wrote the court's opinion and instructed abortionists how to get around the ban using Carhart's method of injecting poison into the hearts of late-term unborn babies.

His abortion business in Nebraska ultimately faltered because of a new state law that banned abortion beyond 20 weeks because of the pain inflicted on the unborn child, and he decided to move to Maryland.

The bags contained condoms and sexually or gruesomely suggestive candies.

One of the pro-life witnesses said, "Four condoms were in the bag we opened, plus instructions; a 'Protect Women' button; three eyeball jaw-breakers and two packages of Whoppers. Sick. Truly sick. ... I witnessed them giving them to the kids I was with, ages 6 to 9."

Grace Morrison, a wife and homeschooling mother of six, has led Monday prayer vigils outside Carhart's Germantown abortion business since Dec. 6, 2010, and she spoke to WND about what happened.

She also is organizing an anniversary protest for Dec. 5, 2011, and hopes at least 1,000 pro-lifers will join her. Morrison and other pro-lifers know that their regular demonstrations have cost Carhart some business due to mothers choosing life.

Morrison described the Carhart pranksters as a tall black middle-aged woman and a short younger white woman with dark hair and black-rimmed eyeglasses. Initially she thought they might be making gestures of kindness.

"I watched them come out of Carhart's staff entrance and they were kind of smiling and laughing and giggling," Morrison said. "There were about 100 of us [pro-lifers] praying when they approached. So I got in my car and followed them because I wanted to see what they were doing, and then I realized they were passing out bags that said '40 DAYS for CHOICE.'

"My own children said, 'Mommy, this is strange candy,'" said Morrison. "And I was like, 'Oh my gosh! Just put it away.' I was just so heartbroken by their cold, calculated way of hurting us, and especially hurting children. It was just such a disappointment – a sign of the evil in their hearts."

The Carhart staffers pulled their Halloween prank after Andrew Glenn, director of the Germantown 40 Days for Life campaign, had left the Monday prayer vigil. The campaign has been used successfully many times across the nation. In it, people volunteer to pray outside an abortion business for 40 days and nights – around the clock.

The campaign has seen a number of clinics that have been the site of prayers close.

After viewing the photos, Glenn told WND: "It is very sad that the people passing out the 40 DAYS for CHOICE Halloween bags are making a mockery of the peaceful, prayerful 40 Days for Life vigil that is taking place in front of Germantown Reproductive Health Services.

"It is disturbing how the supporters of 40 DAYS for CHOICE have turned late-term abortion into a joke," Glenn said. "The killing and dismembering of viable babies and the heartbreaking situations of the women coming for late-term abortions are not a joke, it is a matter of life and death."

A woman who answered the phone at Germantown Reproductive Health Services declined to answer questions.

"First of all, I'm the office manager and I'm not familiar with what you're talking about," she said. She declined to give out her name and said no one from the office had handed out "sexual things."

She said, "No one did that, our staff was working." Eventually she said she wouldn't approve of handing out sexual items to children.

Morrison spoke to Carhart's pranksters on site. She tried to explain women suffer great regret after abortions. She offered to give them Planned Parenthood manager-turned-pro-life activist Abby Johnson's book, "unPlanned." One promised to read Johnson's book, but both uttered the slogan: "Abortion is a woman’s choice."