JERUSALEM – Judah Ben Samuel was a legendary and prolific German rabbi of the 12th century who made some astonishing and specific predictions about the future of Jerusalem and Israel that came true.

Judah Ben Samuel, also known as Judah he-Hasid (Judah the Pious), lived and worked from the end of the 12th century until the beginning of the 13th century in Regensburg, authoring a number of books in the German language.

Ludwig Schneider of Israel Today magazine has translated some of his work into English over the last few years, including "The Book of the Pious – Sefer Hasidim" and the "Book of Calculations – Sefer Gematriyot."

At this time, Judah Ben Samuel published the results of his biblical calculations (Gematria) and astrological observations and summarized as follows: "When the Ottomans (Turks) – who were already a power to be reckoned with on the Bosporus in the time of Judah Ben Samuel – conquer Jerusalem they will rule over Jerusalem for eight jubilees. Afterwards Jerusalem will become no-man's land for one jubilee, and then in the ninth jubilee it will once again come back into the possession of the Jewish nation – which would signify the beginning of the Messianic end time."

TRENDING: How can Republicans win? Gingrich has 'leftist' advice

One jubilee is 50 years (Leviticus 25). It is the 50th year after seven times seven years, the year in which each person should regain ownership of his or her land. Ben Samuel's calculations were purely theoretical; there was absolutely no sign at that time of their being fulfilled. He himself was not able to experience their fulfillment, for it was only 300 years after his death that the first of his predictions were to come true.

Then, when Israel captured Jerusalem in the Six Day War of 1967, exactly one jubilee (50 years) after 1917, Jerusalem reverted to Jewish-Israeli ownership once again. Thereby, according to the prophecies of Judah Ben Samuel, the Messianic End Times began.

Many scholars have studied and made reference to Judah Ben Samuel's writings in an effort to understand how he reached his conclusions. Among those referencing Ben Samuel were Rabbi Isaac Ben Solomon Luria, a mystic dealing with the messianic world (Jerusalem, 1531-1572, Safed); Joseph Solomon Delmegido (1591 Candia - 1655 Prague), a mathematician and astronomer ("Mazref le-Chochma"), Azulai I (1724-1806), a famed bibliographer; Samuel David Luzzatto (1800-1865), a Bible scholar; historian Heinrich Graetz (1817-1891); and Torah scholar Jacob Epstein (1925-1993).

The secret of how Judah the Pious arrived at such accurate predictions has less to do with the actual calculations than it does with the fact that he had consecrated his life to God. His pupils Rabbi Isaac ben Moses (Vienna), Rabbi Baruch ben Samuel (Mainz) and Rabbi Simcha (Speyer) testify that Ben Samuel was a model of abstinence and selflessness and was awaiting with a burning desire the coming of the Messiah.

Ben Samuel was often called "Light of Israel." Even bishops came to him for advice. If anyone asked him where his wisdom came from he would answer, "The prophet Elijah, who will precede the Messiah, appeared to me and revealed many things to me and emphasized that the precondition for answered prayer is that it is fueled by enthusiasm and joy for the greatness and holiness of God."

But to recap the astonishing predictions: In AD 1217 this scholarly and pious rabbi prophesied that the Ottoman Turks would rule over the holy city of Jerusalem for eight Jubilees. Now, keep in mind, he made this prediction 300 years before the Ottoman Turks seized control of Jerusalem in 1517. If indeed 1217 and 1517 were jubilee years as Judah Ben Samuel believed, then his prophecy was exactly right, because exactly 400 years after the Turks took control of Jerusalem they were driven out of the city and the holy land in 1917 by the Allied forces under the command of General George Allenby – on Hanukkah, by the way.

But it gets more interesting still.

The rabbi also prophesied that during the ninth Jubilee Jerusalem would be a "no-man's land." This is exactly what happened from 1917 to 1967, due to the fact that the Holy Land was placed under British Mandate in 1917 by the League of Nations and literally "belonged" to no nation.

It was not until the Six Day War in 1967 when the entire West Bank of the Holy Land was conquered by the Israeli army that the whole city of Jerusalem passed back into the possession of Israel. So once again the prophecy made by the rabbi 750 years previously was fulfilled to the letter.

It certainly would be significant if both 1917 and 1967 were Jubilee years, considering the significance of what happened in Jerusalem on those years. But it gets even more interesting, because Judah Ben Samuel also prophesied that during the 10th Jubilee Jerusalem would be under the control of the Jews and the Messianic "end times" would begin. If he's right, the 10th Jubilee began in 1967 and will be concluded in 2017.

"The Bible should be our standard for prophecy and interpretation of prophetic events," said Joseph Farah, editor and founder of WND, upon learning of Judah Ben Samuel's predictions in Israel Today. "But one cannot ignore what this 12th-century rabbi said and wrote. It's well-documented. And I applaud Israel Today for bringing it to light. The implications of these predictions is staggering to say the least." 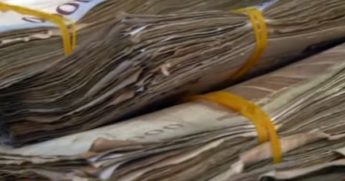