Three years after the Fort Hood military base massacre by a radical Muslim soldier, it seems the Senate is not interested in the possibility of jihadist infiltration of the U.S. military.

Instead, U.S. lawmakers apparently have deep concerns about American Muslim soldiers being harassed or even violently attacked by other enlistees because of the 2009 tragedy.

Earlier this week, Chuck Hagel, President Obama’s nominee for defense secretary, submitted his responses to an extensive questionnaire by the Senate Armed Services Committee probing his positions ahead of scheduled confirmation hearings.

One section of the questionnaire, reviewed in full by WND, was titled “Muslims in the U.S. Military.”

That section contained only the following two questions:

Not a single question asked how Hagel might implement policies to ensure against the enlistment of radicalized Muslims or how the military can work against already enlisted Muslim soldiers being radicalized.

The committee also did not ask Hagel for recommendations on how military leaders can work to better recognize the signs of a radicalized Muslim soldier.

In the case of Nidal Malik Hasan, whose shooting massacre left 13 dead and dozens more wounded, army superiors were reportedly exposed to Hasan’s radicalism but failed to take measures against the army psychiatrist.

Hasan reportedly gave a slideshow presentation on Muslims in the U.S. military that included anti-war statements and sections of the Quran that call for jihad.

Hasan, an American of Palestinian decent, attended a controversial mosque, Dar al-Hijrah, in Great Falls, Va., in 2001 at the same time as two of the 9/11 terrorists.

The mosque was led at the time by late al-Qaida leader Anwar al-Awlaki, who was killed in 2011 in a U.S. drone strike.

A Muslim officer at Fort Hood in Texas was quoted by the London Telegraph as saying Hasan’s eyes “lit up” when he mentioned his deep respect for Awlaki’s teachings.

To this day, both the Obama administration and the military are loathe to call the Fort Hood shooting a terrorist attack even though survivors of Hasan’s rampage were quoted by news media as saying he began his attack by shouting “Allahu akbar” or “Allah is greatest” in Arabic.

Hasan reportedly had earlier given away copies of the Quran to neighbors.

Relatives told media that after the death of Hasan’s parents, in 1998 and 2001, he became a devout Muslim.

“After he lost his parents he tried to replace their love by reading a lot of books, including the Quran,” his uncle, Rafiq Hamad, said.

A former classmate told the Associated Press Hasan was a “vociferous opponent of the war” and “viewed the war against terror” as a “war against Islam.”

Dr. Val Finnell, who attended a master’s in public health program in 2007-2008 at Uniformed Services University with Hasan, said the murderer previously told classmates he was “a Muslim first and an American second.”

“In retrospect, I’m not surprised he did it,” Finnell said. “I had real questions about what his priorities were, what his beliefs were.”

After Hagel's live appearance before the Senate committee today, he was described by Washington media as appearing "defensive, frustrated and lethargic."

But he also raised some eyebrows with his comments, including his non-comments. For example, Sen. James Inhofe, ranking Republican, asked, "Given that Iran, the people – I'm quoting right now from Iran – people of the Middle East, the Muslim region and North Africa, people of these regions hate America from the bottom of their heart. It further said Israel is a cancerous tumor in the heart of the Islamic world. They further said Iran's warriors are ready and willing to wipe Israel off the map. The question I'd like to ask you, and you can answer for the record if you'd like, why do you think the Iranian foreign ministry so strongly supports your nomination to be the Secretary of Defense?"

Hagel said, "I have a difficult enough time with American politics, senator. I have no idea, but thank you. And I'll be glad to respond further for the record."

Freshman Texas Sen. Ted Cruz that played two tapes from Hagel appearances on Al Jazeera – including when he did not appear to challenge a caller accusing Israel of war crimes.

In the second tape, Hagel appeared to endorse a comment that American is a bully.

Cruz told Hagel that is not a position expected of a high government official.

Hagel also refused to answer yes or no to Sen. John McCain's question about whether he was right or wrong to call a troop surge a "dangerous foreign policy." 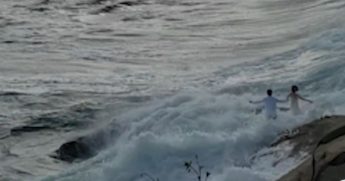