I'm interrupting my series on Common Core State Standards for public schools to join the appeal to Iran and North Korea for the release of American hostages like imprisoned pastor Saeed Abedini and missionary Kenneth Bae.

I'm also calling upon President Obama and Congress to step up their action, stand for religious freedom and fight for the release of these godly men whose crimes were nothing more than exercising their faith.

For those who haven't followed the news on these men of the cloth, pastor Abedini was sentenced to eight years by an Iranian court last January for starting house churches in the 2000s, an era in which they weren't even regarded as a threat to Iran's security.

This past week, Naghmeh Abedini, wife of pastor Abedini, was in Washington appealing to Congress because President Obama severely dropped the ball when negotiating nuclear energy for Iran without seeking a simple reciprocating act of goodwill by the release of pastor Abedini and two other American hostages: former Marine Amir Hekmati and patriot Robert Levinson.

The Obama administration also hasn't done diddly to seek the release of Kenneth Bae in North Korea, a Christian missionary based in China. Bae gives tours into surrounding countries but in November 2012 was arrested by North Korean officials and found guilty of "'hostile acts' and attempts to topple the government," according to CNN.

Bae was sentence to 15 years hard labor and has "recently became the longest known American detainee in North Korea since the end of the Korean War," according to International Christian Concern and Persecution.org. He is also the first American imprisoned there in a hard labor camp.

Bae's mother, Myunghee Bae, was recently granted three very brief visits to see her only son, who was hospitalized for two months due to his failing health. She wrote a column for the Seattle Times on the anniversary of his imprisonment (Nov. 3) reflecting upon her time with him.

Myunghee wrote, "When Kenneth saw me, he rushed to embrace me. He held me tight and cried out, 'Mom!'…. He told me he misses his wife and children very much. He wanted to convey his gratitude to the people who sent letters to him from all over the world."

She mourned, "I tried not to cry, but I could not help myself. My body shook at the injustice of having to leave Kenneth in North Korea. When could I see him again? How long can I endure thinking about my only son's suffering?"

And then she appealed, "We need the help of the American people to bring Kenneth home now: Sign the petition at Change.org/FreeKenNow. Contact your government representatives. Share Kenneth's story. Please don't forget my son Kenneth Bae."

What value or use is it if America embodies freedom and liberty and yet its government does nothing to fight for its imprisoned freedom fighters around the world?

And how ludicrous is it that we give other countries billions of dollars, nuclear energy and buy nearly all of their manufactured products, and in return they imprison our citizens with harsh sentences for their petty "crimes" that happened to be cherished freedoms to us?

The fact is, doing nothing to release U.S. citizens imprisoned abroad not only drives the dagger deeper into their and their families' hearts, but it emboldens crooked and controlling governments around the world and cripples America's future generations. It defers and heaps a greater burden upon our posterity to fight for America's freedoms and enjoy risk-free travel in the world.

Speaking of touring other countries, my wife, Gena, and I were overjoyed to hear about our granddaughters' recent journeys abroad. Our granddaughter, Chantz, just returned from a 10-day trip to China where she was given the opportunity to experience another culture and practice her skills at speaking Mandarin Chinese, which she has studied for the last four years. (Not too bad for a 13 year old!) And our other precious granddaughter, Hannah, will be making her third trip to India over Christmas to do missionary work, which she started as a junior in high school.

All of the actions of those mentioned in this column wouldn't be possible without our patriot predecessors securing America's freedoms and our place in the world. And the similar actions of those in the future will become progressively restricted if we don't stand up now for those same liberties, especially when they imprison our very citizens in foreign lands.

Edmund Burke was right, "Evil flourishes when good men do nothing."

Well, if our present government won't fight for ours and others' imprisoned freedom, then America must call up its most mighty reserves and real power: We, the people. We must embolden and equip our families and our younger generations to be ambassadors of freedom and faith. They are one of the primary reasons I continue to write this culture warrior column.

Do you remember our young friends, twin brothers Brett and Alex Harris? If not, let me reintroduce them to you because you will want to share them with others, particularly the younger people in your life. They are the ones from whom we first heard about the powerful personage of Gov. Mike Huckabee.

I wrote about them in the chapter "Calling All Millennials" in my New York Times best-seller, "Black Belt Patriotism": "I believe my young friends, the twin brothers Brett and Alex Harris, are two model Millennials. I consider them cultural heroes or generational warriors, who are willing to bear the baton of early American values and beliefs, and march forward with a battle cry to raise the expectations and contributions of following generations. They are on the frontlines of battle for the Millennials. They possess the heart and gusto to reawaken their generation to the real American dream. At just 16 they were interns at the Alabama Supreme Court house. And at 19 they wrote their first book, published in mid-2008 – one I encourage every person to read and give to a teenager or Millennial they know. The book is called 'Do Hard Things: A Teenage Rebellion against Low Expectations.'"

Brett and Alex are now 25 years old, married, and their book has sold nearly 450,000 copies and been translated into more than a dozen languages. Their website,TheRebelution.com, was completely redesigned in May 2012 and continues to reach tens of thousands of young people each month. And their social media presence has grown to more than 43,000 followers and continues to come up with fresh ways to reach teenagers with the challenge.

In fact, Brett and Alex recently came up with a creative post for their Facebook page, too. The post itself is very similar to the message of their book, "Do Hard Things," except with a bit of reverse-psychology thrown in. Rather than describe it to you, I'll let you read it for yourself. It also conveys the most amazing story about a young 13 year old that could change the way you view all 13 years olds.

As Brett and Alex explained in their book, "We're not rebelling against institutions or even against people. Our uprising is against a cultural mindset that twists the purpose and potential of the teen years and threatens to cripple our generation. Our uprising won't be marked by mass riots and violence, but by millions of individual teens quietly choosing to turn the low expectations of our culture upside down."

The Harris brothers' book would make an exceptional Christmas gift for young people. I would humbly consider pairing it with another humor-based outreach book that could empower youth, too: My own "Official Chuck Norris Fact Book," which includes many inspirational stories on faith and freedom for future generations. Or an even better option might be my good friend and prolific author Randy Alcorn's brand new graphic novel (extended comic book) titled "Eternity," a perfect gift for the young people in your life.

To empower and transform young people, remember, too, the youth work of groups like Young Americans for Liberty, which are doing incredible things as well. Gena and I support their efforts and endorse their mission.

Lastly, please look into the amazing mission of Gena's and my foundation, KickStartKids, as well as Rachel's Challenge, a nationwide school outreach program for the prevention of teen violence, based upon the compassion and mercy of Rachel Scott – the first victim of the Columbine High School shootings in 1999. Together we can start a chain reaction!

Friends, if we are ever to change the course of our country and world, it will be by supporting and uniting behind young people like these who can and will restore and lead America into a brighter and better future.

Speak of children born for positions of destiny, let us all humbly remember – especially at this time of the year – what Gena, I and all who were mentioned in this article believe fully in our hearts: The real solutions for our world, our country, our families and ourselves will not be ushered in through government or even human potential. But the cures for society and our souls will come ultimately only through our personal reuniting with the Child, whose birth we celebrate on Christmas and through whom real hope and change comes.

About Him, the Bible says:

For to us a child is born,
to us a son is given,
and the government will be on his shoulders.
And he will be called
Wonderful Counselor, Mighty God,
Everlasting Father, Prince of Peace.

(Don't miss my Christmas column next week, "The Case for Christmas," in which I'll explain the rationale or reason in the reason for the season. It's definitely one you might want to forward as a "Christmas card from Chuck Norris"!)

Chuck Norris
Chuck Norris is the star of more than 20 films and the long-running TV series "Walker, Texas Ranger." His latest book is entitled The Official Chuck Norris Fact Book." Learn more about his life and ministry at his official website, ChuckNorris.com.
The mentor who had the greatest influence on my fatherhood
Teens buying fentanyl on social media, and sales are soaring!
The expelled student who won D-Day, WWII and saved the world
It's a heart problem, not a gun or mental health problem
The fallen warrior to whom I dedicated my 'Missing in Action' films
See more... 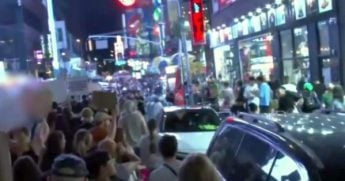