The Grammy Awards is proof positive that the culture war has unabashedly come front and center against conservatives – let alone Christians.

I don't watch the Grammys, but in light of all the frenzy via social media over the gay-marriage ceremony that aired live during the show, I decided to watch this segment on YouTube to understand exactly what went down.

What I witnessed was a forthright assault on conservatives.

It was bad enough for the CBS network to force the liberal gay agenda upon its viewers in an extremely in-your-face manner; it was despicable, to say the least. However, what really caught my attention was not Queen Latifah officiating this blasphemous ceremony, nor a stiff, pale Madonna hobbling alongside her to lend weak vocals, nor gay men wiping tears from each other's eyes as they exchanged wedding bands. I expected such.

What caught my attention were the lyrics to the all inclusive, equality anthem "Same Love," performed by rapper Macklemore – specifically these:

The right-wing conservatives think [being gay's] a decision
And you can be cured with treatment and religion
Man-made rewiring of a predisposition
Playing God, aw nah, here we go
America the brave still fears what we don't know.

Bam. There it is. "… right-wing conservatives …"

A few stanzas from the onset of the song, Macklemore attacks, and conservatives are called out in the culture war against homosexuals. Conservatives are meddling with "a predisposition" of homosexual behavior that God somehow wired in mankind – although it directly opposes his own Word. The lyrics are confusing, as is the nature of rap by artists such as Macklemore. (There exist Christian/conservative artists who rap life and truth.) The remainder of the song demeans church and God, vainly attempting to weave together themes that will never intertwine. And mockery. Lots of mockery. Mostly, the lyrics cast blame on the church and infer the Christian message as hate speech. No surprise there. Liberals and same-sex proponents have been on that bandwagon for many years, which has reprogrammed some sheeple-minded Americans to be wary of stating biblical or political truth. Truth is the new hate speech.

The culture war has escalated to the point of conservatives directly taking the hit for the anti-gay agenda. Typically, Christians bear the brunt of that charge. But as these lyrics prove, the homosexual agenda is striking more specifically at the heart of politics than religion alone, further increasing heightened tension between conservatives and liberals. Macklemore directly places blame at the threshold of conservatives in the most artistic format known to man: music.

Grammy viewers were instantly taught that homosexuality is inbred, and right-wing conservatives are standing in the way of "natural" feelings, lifestyles and love. Macklemore is the front man who sends a very clear message: Conservatives are trying to treat something that needs no treatment. … God …what God? Church doctrine is hateful. … Gays will live and love out loud. … We're here. … See? Even straight couples embrace sexual equality in marriage. … Deal with it.

Furthermore, Macklemore raps that "America the brave still fears what we don't know," suggesting that the majority in America, specifically conservatives, are fearful of gays. Are we, really? Macklemore specifically called out conservatives on the largest music stage in the world, affecting millions with his inclusivity propaganda, political rant and polarizing categorization of conservatives. I've read similar nonsensical rants in times past from other artists. But here, right-wing conservatives have been directly targeted en masse – and there is no sign of letting up.

Are we shocked or appalled that straight couples happily exchanged marriage vows alongside homosexuals and lesbians on national television? Haven't we seen the signs all along? For decades, homosexual advancement has encroached upon Christians and conservatives. Everything from rainbows to school curriculum to parades have been hijacked by progressives, tossed to politicians and handed down to liberal activists working alongside comrades in the entertainment industry. Macklemore was not ONE voice with a few stage props who sang for ONE night. He adequately represents a culmination of years of erosion of Christian and conservative values through liberal ideology and implementation.

So what should Christians and conservatives do? Complain to CBS? Sign petitions? Blog about how awful this behavior is for society? Those are sound starting places.

I propose this: Be yourself and don't be so defensive. I'm myself no matter the situation or people. Sometimes I deliberately go through the checkout line of the lesbian clerk to drop a few words of Jesus' love in her ear and then compliment her haircut. Or I encourage the star-struck 17-year-old to become informed on political issues that will affect her life, then discuss those big hoop earrings she's sporting. No defense, no arguments, no worries. I remain offensive. I'm me.

Remind yourself that conservative values are still a major element in society, and Christianity is the only answer for cultural depravity. The Grammy folks want us to believe otherwise. They took a blatant shot at us through deplorable lyrics and godless imagery and tried to frame the narrative to say that homosexuality is widely accepted as the norm. They're wrong. Society at large does not accept that narrative. They hope we'll throw our hands up and surrender. Don't do it. Order my book for a "how to" approach to dealing with godless liberalism within society.

We have the goods. We have the answer to society's ills. If we didn't, we wouldn't be under such attack. The culture war against conservative and Christian values is apparent. The attack will come, even increase. Expect it. Prepare for it, because the culture war intends to bring it.

That's how we fight the battle and win the culture war against our personal convictions. 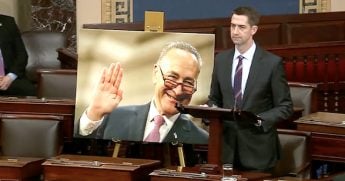 Democrats use 'Jim Crow filibuster' to protect the Kremlin 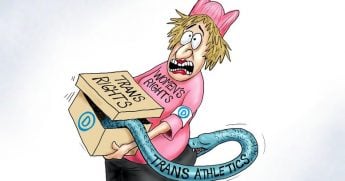 A real pain in the tush