WASHINGTON – One of the tea-party leaders in Congress believes the days of Rep. John Boehner, R-Ohio, as speaker of the House of Representatives are numbered.

Rep. Louie Gohmert, R-Texas, told WND he predicts Boehner will no longer be speaker "by next January," regardless of the outcome of the midterm election in November.

The Texan doesn't think it will take a coup to remove Boehner, believing the tide is already moving in that direction, and saying, "I think people are ready for a change."

And Gohmert would see that as a change for the better, because, he says, "We've got to have someone who is smart enough to realize" it was (Sen. Majority Leader) Harry Reid (D-Nev.) who shut down the government, not the GOP.

In addition to predicting the downfall of Boehner as speaker, Gohmert also told WND:

The issue of GOP leadership is a timely one because Gohmert just announced he has formed a political action committee, or PAC, called GOHconservative.

The congressman told WND it was necessary to raise funds to protect conservatives from a "war on the tea party" waged by Karl Rove and other establishment Republicans.

"Someone asked me why I am going on the attack. I said, 'You don't understand, setting up this PAC isn't an attack; it's a defense against those who want to attack tea-party candidates.' I want to raise money to help conservatives. And to show them we can raise money and we will help."

As Gohmert sees it, GOP leaders have stopped listening to the base of the party, which he believes is represented by tea-party groups.

He acknowledged that Rove had retracted a statement that he was at war with the tea party, but observed, "There just too many people who feel like the tea party is a threat instead of recognizing it like they should, as a God-send. Instead of being afraid of the tea party, I think they ought to embrace it."

Gohmert said he believed tea-party conservatives represent the majority of Republican voters and described it as self-defeating for Republicans to alienate them. In fact, he suspected most taxpayers, including even Democrats and Independents, identify with tea-party ideals, based on polls he has seen.

So, why would the GOP leaders go to war with a faction that represents the majority in their party, and perhaps a majority of all taxpayers?

"I guess that's a fear of something one doesn't understand, because this is a group that, clearly, got us the majority in the House in 2010," he said. "And they're rising up and getting active for us." 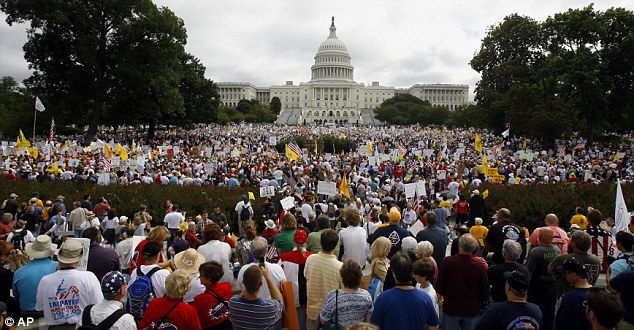 Gohmert described tea parties as the GOP's natural constituency, taxpayers who are tired of seeing government waste and abuse.

The lawmaker predicted that if the GOP disenfranchises tea-party voters, they will stay home on Election Day.

"Look at 2012," he said. "You had millions and millions of Americans who were so turned off by an extremely nice, but moderate (GOP presidential candidate Mitt Romney) that the Republican establishment put up for us."

Soft-spoken but adamant, Gohmert insisted, "It should be pretty clear by now" that what he called "a very nice moderate like Bob Dole, or a moderate but good man with the Hanoi Hilton in his background, like John McCain, or an extremely nice moderate like Mitt Romney, are not the answer to getting voters out and taking the Senate majority back."

He warned, "I hope they'll wake up before they ruin the chance of taking the Senate this year."

Does he think a tea-party candidate could win the presidency?

"I think one could," he said. "But, it would be difficult if the Republican establishment is fighting him or her, as hard as they have been fighting against rank-and-file tea-party folks. Look, we've given moderates a chance over and over, and they are not winning."

Gohmert said moderates keep insisting the GOP needs someone "who reaches out to the other side, who will compromise on his own principles, like John McCain. Well, you got him and he got obliterated in the election."

The Texan said, instead, the GOP needs somebody who has a track record of doing what he or she says, and that's basically what the tea party wants.

Does he think tea-party voters should support conservatives who challenge GOP incumbents in "safe seats," even if, as some critics claim, that could hurt Republican chances of retaking the Senate?

"I think it's a good thing when there's competition," he said.

He even implied that retaking the Senate may mean very little if leadership does not change.

"Our country is in enough trouble," Gohmert said. "We just passed a trillion-dollar debt ceiling increase without any fixing of anything, and that was led by establishment Republicans. So, if we're going to save this place, we're going to have to have people who are men and women of conscience, who are not afraid to stand up (for what they believe) before we lose this country entirely."

"I think if somebody's not doing their job, they're not keeping their promises, and we've got to have people who will do that," he added.

Gohmert feels GOP leadership is making a key mistake by listening to insiders like Rove more than tea-party voters, and he cited last autumn's government shutdown as an example.

The Texan was encouraged when Boehner initially supported the effort of conservatives to defund Obamacare in September as part of an attempt by Republicans to broker a deal with Democrats to keep the federal government funded.

But, after the battle was lost, the congressman was particularly disappointed when Boehner went on "The Tonight Show," called the government shutdown a disaster and blamed conservatives, even though, Gohmert said, they tried "compromise after compromise."

The congressman took exception when Boehner said he knew it would be a disaster to shut down the government, "but he decided to go along because that's what people wanted."

"I thought he had an actual change of heart," said the congressman, but, he added, "He just wanted to stay in his leadership position."

Should House conservatives try to replace Boehner as speaker?

"I've already sought to do that," he said. "I think we'll have a new speaker next January. Hopefully, a Republican. I think we'll have a new speaker because the tide is going in that direction. Because we have got to have someone who recognizes that when we compromise over and over, and when Harry Reid says, 'It's my way or a shutdown, no compromise, no negotiations,' it is Reid who shutting down the government."

That's when Gohmert said, softly, "We've got to have someone who is smart enough to realize that, so I guess that will take a change in leadership."