Organizers of the National Life Chain Sunday observance in an estimated 1,500 cities and towns across America say church leaders must be at the forefront of the campaign against abortion.

WND reported pastors will lead their congregations onto sidewalks this Sunday for a 90-minute session of prayer and repentance in opposition to abortion.

National Life Chain Director Royce Dunn says seeking God's help is the only way America ever will rid itself of the ongoing holocaust of abortion.

"At this point in my pro-life experience, it is not easy to believe an end to the killing will occur without divine intervention," he told WND in an interview.

Organizers say "chatter, frivolity, and both verbal and physical responses to motorists" are discouraged, and the 90 minutes on local sidewalks should focus on "prayerful self-analysis, repentance, and serious commitment to helping end abortion in our nation."

"Life Chain is not chiefly a demonstration, and its witness is not intended for the viewing public only," organizers said. "Instead, its first goal is to minister to its own participants – to those who call Christ their Lord and hold pro-life messages that declare abortion a grave evil that defames the name and holiness of God (Leviticus 18:21). Indeed the church that Christ founded has drifted into cold indifference toward the sacredness of human life."

A newly released book, "Abortion Free," by Operation Rescue executives Cheryl Sullenger and Troy Newman, also offers suggestions for those who want to do something in their own communities about the $2 billion a year abortion industry in the United States.

The authors recount many of their own experiences battling abortion, including their successes in shutting down clinics.

Newman endorsed Life Chain Sunday, but he said Christians must not stop there.

"Life Chain is a great way to get involved in influencing the sentiment toward abortion at the local level. It's one of the few times every year where those who support life can gather en masse and testify to the community that abortion kills children," he told WND.

"But we hope involvement won't stop after Life Chain Sunday. We encourage participants to use Life Chain as an important element of a larger plan to build an abortion-free community. Life Chain is a great way to connect with others who share the same goal. This is crucial because it is really at the state and local level where pro-life activists can have the greatest impact on shutting down the abortion cartel for good."

In a document provided to WND, Dunn agreed, emphasizing pastors and leaders must play a role in fighting abortion.

"Please, pastors, implore us, the church, to comprehend the literal holocaust in our midst – the massive killing of innocent fellow citizens who lack the legal protection given to slaughterhouse animals and pets," he said. "Abortion deaths exceed those of all U.S. wars, natural disasters, epidemics, and accidents combined. Surgical abortions exceed 57 million, while most birth control abortions are private, but they may outnumber the surgical killings."

He cited the writings of Francis Schaeffer, author of "The Christian Manifesto."

"Every abortion mill should have this sign posted on it: 'This abortion mill is open by permission of the local church,'" Schaeffer wrote.

"America is home to 300,000 'pro-life' clergy, yet a grievous holocaust prevails. Pastoral leadership must emerge that will not be deterred in the sanctuary, on the street, at city hall, or when jailed from unjust arrest. A city or town with such a voice is blessed. Few clergy have ministered at an abortuary or urged their laity to do so. Many sermons speak truth about abortion, but without a battle plan the sermons are like starvation appeals that produce no food deliveries," the document continued.

"Equip laity for persevering service," he wrote. "Build a strong pro-life program for all age levels in each local congregation. Keep abortion on church board agendas, and fund child-saving strategies. Network with fellow pastors. If the nearest abortuary is in a neighboring town, join forces. Proclaim love as essential as prayer because love and prayer partner, and release the power of the church to end legal child killing community by community."

He also quoted Charles Finney, an evangelist during the Second Great Awakening.

Dunn notes there are many excuses to avoid pro-life activism: fear of offending women who have had abortions, being too busy with other church duties, concern for attendance and giving, personal guilt, assuming pro-life activities should rely only on prayer and assuming a donation to a pro-life ministry is sufficient.

But there's no real opt-out, he insisted.

"Pastors, your leadership is vital. Please garner a battle mentality like unto the remnant of Nazi-era clergy who obeyed Christ, however dim their prison cells. Of clergy who desired 'just to preach the gospel' and avoid conflict, Richard Wurmbrand, Voice of the Martyrs founder and 14 years a prisoner, wrote: 'I wonder where they learned their gospel. ... The gospel we preach includes the mandate, 'Let my people go!'' Fellow Lutheran Dietrich Bonhoeffer urged his fellow clergy to not merely 'bandage the wounds of victims' but to defeat the injustice that seized them. Let us restore integrity to the church and see God work mightily through and among us to rescue the innocents and to heal our culture."

Lay leaders, he said, can be "your loyal armor bearers." But they don't have the influence and pulpit access.

"Satan knows the clergy's strategic role and that abortion relies on passive pulpits. Armed with clever spiritual weapons, Satan seeks a barrier of silence or inaction between pulpit and pew," he wrote.

Dunn, a Protestant, believes the church needs to treat contraception like abortion.

"As to pregnancy prevention, birth controls with abortive potential must be abhorred. For spouses who pass the 'heart test' and feel compelled to forego pregnancy, options are abstinence and NFP (natural family planning). If used correctly (scientifically), NFP is exceedingly efficient and cultivates a loving 'partnership' that shuns sensuality, marital unrest, divorce, and discord among offspring."

Dunn calls on the wisdom of Pastor Ed Martin of Jacksonville, Florida, for advice on ending abortion.

Martin said: "We are one million Christians away from ending abortion in America. If every abortion clinic were covered by one thousand Christians each day the clinic killed babies, abortion would soon be of the past. … Ending abortion is not difficult. Finding the Christians to do it is the hard part. When we see a pastor on fire to save babies, then and only then do we see the church praying and ministering at the death mills. America's abortion holocaust will end when the pastors agree to end it, state by state."

Churches can register to participate in National Life Chain Sunday on the organization's website, which includes information about where events are being held.

The impact often cannot be quantified.

A lady testified that 10 years ago, she was driving by a Life Chain observance in Savannah, Ga., and decided not to have an abortion. She pointed to her daughter and said, "This is who I would have aborted." 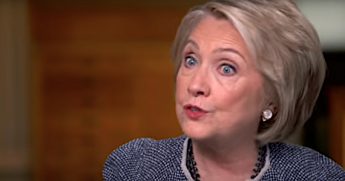 'History will sort it all out': See Hillary in 2019 charge Trump stole election