WASHINGTON – It's doubtful most Americans know the U.S. Capitol was once the largest church on the East Coast.

But it was, after President Thomas Jefferson endorsed church services inside the Capitol, with as many as 2,000 in attendance from 1800 to 1869.

History will repeat on April 29, when worship comes back to the Capitol during the 4th Annual "Washington: A Man of Prayer." 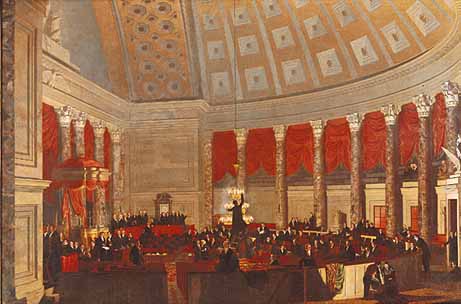 The U.S. House of Representatives in 1822

The event is part of a growing movement over the last few years that has brought prayer back to those hallowed halls, and aims to put prayer back into the heart of our nation.

The annual payer service is the brainchild of Rev. Dan Cummins, associate pastor of Skyline Church of San Diego, California.

"Washington: A Man of Prayer 2015" will commemorate the 226th inaugural anniversary of President George Washington, with members of Congress and national Christian leaders honoring the first U.S. president as a man of Christian faith, and offering prayers on behalf of the nation, its president and his Cabinet, the Supreme Court and its justices, and members of Congress.

Speaker of the House John Boehner, R-Ohio, initially gave Cummins access to Statuary Hall in May 2012, the first time a private citizen had been granted use of the hall to conduct a prayer service there in more than 120 years.

Click here to host the WND.com internet streaming of "Washington — A Man of Prayer 2015" from Statuary Hall in the nation’s Capitol.

The program will be available via Daystar Television Network and Internet streaming provided by WND to homes and churches all across America.

Rabbi Jonathan Cahn will offer prayers, and all members of the Senate and the House have been invited to participate and give a prayer on America’s behalf.

See the WND video of Sen. Ted Cruz's moving tribute to his father at "Washington — A Man of Prayer 2014":

Last year, WND's report on the event highlighted a particularly moving moment during which one could have heard a pin drop as a hush fell over the audience.

It was a gentle and touching moment between father and son – ironically, right in the heart of raw political power, the U.S. Capitol.

Embracing tenderly, pastor Rafael Cruz turned to his son and said, simply, “I love you.”

“I love you,” replied the senator.

“How precious it is to have a good dad,” he observed.

WND observed how, on that special night, the love between father and son was symbolic of the deep, abiding love the "father of our country" had for America, when George Washington dedicated the new nation to God.

"I believe the impact of this event could be a spiritual turning point for the nation as Americans witness senators and members of Congress reaching out to God in penitent prayers from inside the nation’s Capitol," said Cummins of this year's event.

"Washington: A Man of Prayer" commemorates the events of April 30, 1789, when, after being sworn in at Federal Hall, President Washington, accompanied by Congress, proceeded to St. Paul’s Chapel where they offered dedicatory prayers to God in Divine Services on America’s behalf.

"On that day," said Cummins, "the world saw more than just the inauguration of the president of a new nation; it witnessed a watershed moment in history when the ideals penned in ink on parchment at Philadelphia’s Continental Congress would preserve what sword and patriots’ blood had inscribed on the field of battle."

Was it a contradiction for President Jefferson, the man who coined the expression "a wall of separation between church and state," to let the U.S. Capitol to be used for weekly Christian church services, which he attended?

Not the way Jefferson saw it.

The term "separation of church and state," which is never referenced in the U.S. Constitution, came into use after Jefferson penned a letter in 1802 to the Danbury Baptist Association of Connecticut. In his letter to the Danbury Baptists, Jefferson felt his "wall of separation" was to protect the church from the state, and, contrary to the modern interpretation, not to protect the state from the church.

In fact, just two years before the First Amendment was drafted, the Continental Congress made this point abundantly clear when it enacted the Northwest Ordinance, which stated, "Religion, morality and knowledge, being necessary to good government and the happiness of mankind, schools and the means of education shall be forever encouraged" (Library of Congress 1787).

The first prayer for the Second Continental Congress, Philadelphia, September 7, 1774