During a radio interview Sunday, Baltimore protest leader Malik Shabazz warned show host Aaron Klein, who doubles as WND’s senior reporter, that he will be “monitoring” Klein’s coverage of the riots, along with the reporting of other major media outlets.

“You don’t like me,” added Shabazz. “But I come on this show today to refute you.”

Shabazz was speaking on “Aaron Klein Investigative Radio,” which is broadcast on New York’s AM 970 The Answer and Philadelphia’s NewsTalk 990 AM.

The exchange took place after Klein asked Shabazz whether he takes any personal responsibility for last Saturday’s violent clashes following a breakaway protest led by the activist attorney.

The New York Times, the Associated Press, the New York Daily News, CBS local and other news media outlets each named Shabazz as a leader of the breakaway protest last Saturday.

"There, Malik Shabazz, president of Black Lawyers for Justice, a Washington, D.C.-based group that called for the demonstration and advertised it on social media, told the crowd that he would release them in an hour, adding: ‘Shut it down if you want to! Shut it down!’" reported the New York Times.

Following that protest, the AP reported: “A smaller ‘splinter group’ looted a convenience store and threw tables and chairs through storefront windows, shattering the glass. One group smashed the window of a department store inside a downtown mall and, at one point, a protester tossed a flaming metal garbage can toward a line of police officers in riot gear as they tried to push back the crowd.

“Earlier, a group of protesters smashed the windows of at least three police cars and got into fights with baseball fans outside a bar.”

Shabazz responded to Klein’s question about taking responsibility by stating, “I take no responsibility for anything connected to last Saturday’s incidents that occurred after our rally.”

“And any headline, any suggestion to the contrary and any labeling of Malik Shabazz as responsible for the violence of last Saturday will be met with some serious legal consequences as I am monitoring these articles and your writing.”

“I know you have some very devious writings,” he said. “You don’t like me. But I come on this show today to refute you.”

Shabazz was referring to a WND article last week authored by Klein that quoted the other news-media outlets as identifying Shabazz as a leader of the splinter protests last Saturday.

Klein retorted: “I don’t have any personal opinion of liking you or not liking you. But listen, let me quote some rhetoric of yours that I do have a problem with.”

Shabazz continued: “Because I will subject you to the penalties of slander and defamation as we move forward. Now I want to say in specific in terms of last Saturday when I said ‘Shut it down’ it was a euphemism.”

“At most it only meant acts of legal and lawful civil disobedience that are traditionally used in the police brutality demonstrations, such as the temporary stopping of roads and highways. That was the only reference it was for it.”

Shabazz maintained there was “no call at all to do harm to anyone’s person’s property or their persons.”

“Also 'shut it down' means shut down things in our lives that we are doing,” he stated. “That help this problem. Shut down disunity. Shut down division amongst ourselves. Shut down anything that is keeping us from coming together to get justice in our community. That’s what it means.”

Klein asked: “So then let me ask you. Do you believe that it is a legitimate response, though, those rioters who are involved in these violent clashes, these acts of vandalism, do you think that that’s legitimate?”

Shabazz stated that “Dr. Martin Luther King said that rioting is the language of the unheard.”

Shabazz described a scene last Saturday in which black youths engaged in a clash with police, throwing rocks “and they drove the police force off that block with those rocks.”

“They weren’t out there burning cars. They weren’t going to steal a television set. Or a liquor bottle. They were driving them police of that block with them rocks.”

“So you think it’s okay to throw rocks at police officers?” petitioned Klein.

“Excuse me,” persisted Shabazz. “I am making my statement. Therefore I’m gonna protest in driving those officers back who improperly had thrown rocks at them, that was their form of protest similar to the way the Palestinians protest the Israelis.” 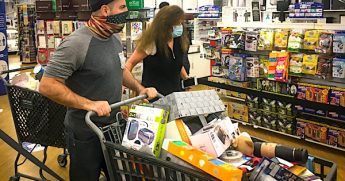