"Look, folks, you can think all you want, but there's no legal basis to stop it now," Limbaugh told his listeners on Monday's show. "There is no intellectually honest way to distinguish the reasoning on gay marriage from applying the same reasoning to supporting polygamy."

Limbaugh explained the case for same-sex marriage was "all rooted in self-esteem and dignity and not being denied things that make you happy." Kody Brown and his wives, Robyn, Meri, Christine and Janelle, cast of "Sister Wives" fled Utah for Las Vegas under the threat of prosecution for bigamy

The Supreme Court's decision in Obergefell v. Hodges, he said, doesn't assume marriage is a union of only two people.

In fact, it didn't set any boundaries at all.

"That limit is not specifically there," Limbaugh explained. "They've rewritten what marriage is now, is the point here, folks. Marriage was what it was as ordained from the ancient biblical texts."

He then read passages from Genesis 2:23-24 and Matthew 16:4-6, which reaffirm the biblical definition of marriage.

"But it's been rewritten now, and it's been written not under any sort of constitutional purview but rather some people out there that were denied something and it's not right," he said. "A lot of people had something and those people didn't and then those people want it, so we think they should have it. Their self-esteem and their dignity is tied up into it."

And if a man comes along and declares, "I want two wives"?

"[T]he ruling in this case does not give anybody the right to tell 'em 'no,' Limbaugh explained. "Marriage had a specific definition. Words mean things. And now it's become something entirely different by virtue of the Supreme Court. You wait. There will be attempts to expand on this in ways that you can't even conjure." Don't think a move to legalize polygamy could happen in America?

WND has reported that, while spouse collecting is still illegal in the United States, polygamy is apparently thriving – and not where most Americans might expect.

The mainstream media tend to focus on polygamists who belong to the Fundamentalist Church of the Jesus Christ of Latter Day Saints in Utah, Arizona, Texas and Colorado.

Polygamy made national headlines in two high-profile cases in recent years: In 2007, FLDS leader Warren Jeffs was convicted of sex crimes charges. (Jeffs is estimated to have more than 50 wives and is reportedly issuing edicts from his prison cell.) And in 2008, authorities raided a Texas FLDS compound called the YFZ Ranch, and found six men guilty of child sexual assault.

But Muslim men in America are marrying multiple wives as well. The trend can be seen in other countries as well. Canada's decision to legalize homosexual marriage in 2005 became the basis for polygamists' arguments for having multiple spouses.

In 2009, the Associated Press reported, "Canada's decision to legalize gay marriage has paved the way for polygamy to be legal as well, a defense lawyer … as the two leaders of rival polygamous communities made their first court appearance."

"If (homosexuals) can marry, what is the reason that public policy says one person can't marry more than one person?" argued Blair Suffredine, a lawyer representing a man who was charged with marrying 20 women.

In the U.S., with the expansion of the legal definition of marriage to include homosexuals, now other groups are advocating for polygamy.After New York legalized homosexual marriage in 2011, Moein Khawaja, executive director of the Philadelphia branch of the Council on American-Islamic Relations, or CAIR, tweeted: "Easy to support gay marriage today bc it's mainstream. Lets see same people go to bat for polygamy, its the same argument. *crickets*"

In a 2011 survey conducted by The Muslim Link, 42 percent of the Muslims surveyed said "they were either in or knew others in, polygamous marriages within the local Muslim community,"

According to the report, "Thirty nine percent said they would engage in a polygamous marriage if it were legal in the United States. ... [N]early 70 percent said they believe that the U.S. should legalize polygamy now that it is beginning to legalize gay marriage." In March 2012, a WND/Wenzel Poll, conducted exclusively for WND by the public-opinion research and media consulting company Wenzel Strategies, indicated there is a surprisingly high level of support for polygamous marriage developing across the U.S. A full 22 percent of the respondents said there is no legal justification for denying polygamy, based on the fact that legislation and judicial decisions have affirmed the validity of same-sex "marriage" for homosexuals. Another 18.7 percent were uncertain. Further, 18 percent of the respondents said there was no moral justification for denying polygamy, and 14.5 percent were uncertain. The scientific telephone survey had a margin of error of 3.72 percentage points. While only 6.1 percent said polygamy is a "preferred" lifestyle, another 15.9 percent said it is an "equally valid lifestyle." Across America, that would mean tens of millions accept the idea.

Who's to blame for same-sex "marriage"? Paul Kengor's "Takedown" argues that extreme-left radicals are attacking America's families in their pursuit of "fundamental transformation."

What else is next?

Limbaugh noted that "a lot of liberalism" is "rooted in the misery and unhappiness of being in a minority."

The homosexual movement reduced marriage to it "to a thing or a benefit that some people get and some people don't."

"And that isn't fair, and it's not democratic," Limbaugh said. "[They] … think that getting what the majority has is gonna make 'em happy, and they're gonna find out that it doesn't."

All of their efforts and triumphs will never be enough, he explained, because there's a fundamental misunderstanding of why there's misery in the first place. "[T]he unhappiness born of envy and resentment is never, ever mollified," he explained. "That's why all of the great philosophers have warned people, 'Do not act on vengeance, do not act on envy, 'cause you're not gonna like what you get. It's not gonna give you the happiness you thought.'"

In fact, as Limbaugh noted, Chief Justice John Roberts mentioned the "inevitability" of polygamy in his dissent:

"Although the majority randomly inserts the adjective 'two' in various places, it offers no reason at all why the two-person element of the core definition of marriage may be preserved while the man-woman element may not. Indeed, from the standpoint of history and tradition, a leap from opposite-sex marriage to same-sex marriage is much greater than one from a two-person union to plural unions, which have deep roots in some cultures around the world. If the majority is willing to take the big leap, it is hard to see how it can say no to the shorter one. It is striking how much of the majority's reasoning would apply with equal force to the claim of a fundamental right to plural marriage."

And, as WND reported in April, Justice Samuel Alito asked during oral arguments why four lawyers wouldn't be allowed to marry if people of the same sex may do so.

Limbaugh also noted that in the 2003 Supreme Court case Lawrence v. Texas, Justice Antonin Scalia correctly predicted that the Supreme Court would soon hear a case on the constitutionality of same-sex marriage. Just as Scalia warned same-sex marriage was coming as a result of overturning Texas' anti-sodomy law, Limbaugh said, Roberts is now warning that polygamy is right around the corner.

"Folks, you've gotta understand here: Supreme Court decisions create a lot of things. Precedents, new rules," he said. "Now, animals? The one thing about animals is that even though a woman in the U.K. did marry her dog, animals cannot give consent, so that's not a legitimate thing. An animal can't consent to a marriage to its master. ... I'm thinking that the line would be drawn there."

But then Limbaugh questioned even that assumption: "Actually, who the hell knows anymore?" 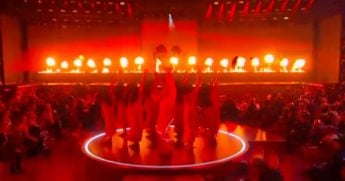