WASHINGTON – Dr. Ben Carson, the only close rival to Donald Trump in Republican presidential polls, says he will do something no president or Congress has done in a long time – freeze the debt, stop borrowing, force Washington to live within its means.

It's a radical prescription to solve a problem Dr. Carson characterizes as "the No. 1 national security threat."

In a commentary headlined, "Righting the Ship of State," published exclusively on WND.com, Carson, a retired neurosurgeon who originally stunned the nation with a rebuke to President Obama's Obamacare plans during a speech at the 2013 National Prayer Breakfast – immediately prompting chatter that he would run for president, noted the debt is $18.5 trillion today.

That's "more than double what it was when Barack Obama took office in January 2009," he wrote.

"While America faces several very real existential threats in the 21st century, our ballooning debt is one impending crisis that is worse than any other threat. If not addressed, this threat is certain to bring down our great country," he warned.

Get a "Ben Carson for President 2016" or "Run Ben Run" bumper sticker or any of his best-sellers, from "Gifted Hands" and "America the Beautiful" to "Take the Risk" and "One Nation" from the WND Superstore.

He pointed out that no one – from either a Democrat White House or a Republican-led Congress, has "offered a plan to stop it, let alone reduce it. Borrowing and spending without limit is the new normal inside the beltway. Each year, Congress and the Executive joust over raising the debt limit, rationalizing that they are really just paying last year's bills. There's just one problem: This exercise is completely unsustainable and will eventually, without any doubt, result in catastrophe for the U.S. government and the U.S. economy," he said.

Congress actually is facing right now another demand to boost the debt limit – with a deadline scarcely two weeks out.

"I plan to address this on my first day in office – Jan. 20, 2017. Here's what I will do on Day One. I will tell the nation that, beginning immediately, we will no longer borrow money from future generations to sustain the growth of government or empower it over ordinary Americans."

He said cuts will be made, programs ended, departments and agencies streamlined and waste eradicated.

"Washington will live within its means just like ordinary Americans," he wrote.

What do YOU think? Do you agree with Ben Carson on the debt freeze? Sound off in today's WND poll

Actually, there are several possible blockages to more and more borrowing and spending. The U.S. House at any point could have, as WND CEO and co-founder Joseph Farah pointed out in his "No More Red Ink" campaign in recent years, simply by not authorizing spending.

The Constitution requires that all spending bills originate in the House.

The president also can do the same by not signing a bill, even if it was approved by Congress.

Carson said he will not play the game of chicken every time the nation's borrowing reaches its statutory limit.

"I will make this announcement immediately so that we can begin planning, conferring and making intelligent decisions," he said.

Promising to make sure existing loan obligations are paid, he said the solution is to "stop spending and borrowing beyond our means."

Will he try to crash the system with funding cutoffs?

No, but he said the only way to get that limit increased would be for it to be necessary while "Congress commits to a viable legislative program with defined action items for budget reform that puts this country on a path of long-term fiscal discipline."

What's needed first to get out of a hole, he noted, is to "stop digging."

"A long history of bipartisan profligacy will end on my watch," he said. "The time is now. Today is the day of reckoning. I ask every American to stand with me in doing what is right and necessary to save America from its greatest security threat and from the inevitability of economic catastrophe."

Farah, who launched the "No More Red Ink" campaign in January 2011 following the Republican takeover of the House of Representatives, said he is suspending the campaign because "there's no chance the Republicans in the House are listening to the will of the people."

The campaign generated more than 1 million red letters to House Republicans urging them to freeze the debt limit.

"Our only hope," he said, "is that a Republican president in 2017 will take the bull by the horns and use the debt limit to extract major cuts in the budget or that he or she will simply freeze the debt and force cuts to balance revenues with spending. I'm grateful we're starting to hear such talk from Dr. Carson and Donald Trump. The hour is late, and this borrowing-and-spending is indeed making this the No. 1 security threat to the nation."

WND reported only this summer that the Obama administration was warning Congress that it needs to raise the nation's debt ceiling – the maximum the government can legally borrow – beyond its level then of $18,113,000,000,000.00 because officials already are having to juggle the books to keep the balance in the black.

The issue repeatedly has been the source of conflict in Washington, with a standoff with Obama in 2011 leading to a downgrade in the nation's credit rating by one rating agency and another in 2013 developing into a two-week shutdown of some portions of government when Barack Obama refused to negotiate with Congress.

Over the summer, according to CNN, Treasury Secretary Jack Lew dispatched to leaders of the legislative bodies a letter telling them they need to raise the ceiling, and soon.

Or lawmakers could, according to another plan from the Government Accountability Office, simply eliminate the ceiling entirely.

To give the president virtually unlimited borrowing authority.

The GAO report said such a move would eliminate the possibility there would be no money available to pay interest on the nation's debt when it comes due.

Reported CNN, "This scenario would also reduce the potential for disruptions to financial markets well before a deadline that approaches for defaulting on the debt."

The debt ceiling then of $18,113,000,000,000.00 was reached in mid-March, but administration officials say they were operating the government on "extraordinary measures" – essentially transferring funds around, utilizing those accounts with balances and delaying scheduled payments for things like retirement benefit accounts.

Estimates then were that those mechanisms will expire sometime probably in October.

That now has arrived.

The debt ceiling already has been raised 74 times in the last five decades, including five times so far under Obama.

Congress had passed the Temporary Debt Limit Extension Act in February 2014, and that simply suspended the debt limit for Obama. But that expired in March of this year, and the new limit of $18,113,000,000,000.00 was set.

The national debt clock recently (the numbers change constantly) estimated that the debt liabilities per person totaled $57,026. But because there are many who do not pay taxes, the per taxpayer liability is $154,433.

When Carson addressed the prayer breakfast, with Obama in his audience, he earned the instant praise of talk-radio icon Rush Limbaugh.

Specifically, Carson pointed out that medical health savings accounts would be a far better solution to America's health-care issues than the universalized Obamacare.

Carson said at the time, "When a person is born, give him a birth certificate, an electronic medical record, and a health savings account to which money can be contributed – pretax – from the time you're born 'til the time you die. When you die, you can pass it on to your family members, so that when you're 85 years old and you got six diseases, you're not trying to spend up everything. You're happy to pass it on, and there's nobody talking about death panels."

"I want to spend some time here ... on Dr. Benjamin Carson," Limbaugh said at the time. "You don't hear people speak this way. The Republicans don't speak this way to Obama. … Here you have the guy who's head of neurosurgery at Johns Hopkins Hospital at the National Prayer Breakfast. … [and] in 43 seconds, the director of neurosurgery at Johns Hopkins gave the answer to Obamacare.

Bob Unruh
Bob Unruh joined WND in 2006 after nearly three decades with the Associated Press, as well as several Upper Midwest newspapers, where he covered everything from legislative battles and sports to tornadoes and homicidal survivalists. He is also a photographer whose scenic work has been used commercially.
COVID was 'best thing ever' for Biden's campaign, aide admits
Romney expects Trump to win 2024 nomination if he runs
Pranking actor admits using film to harm Trump in 2020 election
Biden's attorney-general pick drops grenade, cites 'Capitol bombing'
Iran now demands $1 trillion in 'reparations' from Biden
See more... 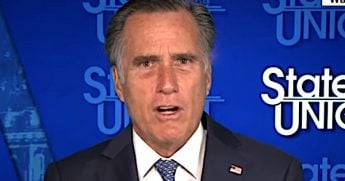