Where oh where have the Muslim migrants gone?

That is the question German authorities are asking themselves after some troubling reports of disappearances.

According to German press reports, keeping track of all the Muhammads and Alis pouring across borders is proving ever so tricky for European countries being flooded with people on the move from the Middle East and Africa.

Now, the United Nations is partnering with a private company to offer a solution – a new "universal" identification system that will comply with the United Nations' sustainability goal of getting "legal" biometric IDs that include iris scans, photographs and fingerprints, "into the hands of everyone in the world by the year 2030."

It offers hope for the UN’s Sustainable Development Goal of getting legal ID into the hands of everyone in the world by the year 2030 with its Identification for Development (ID4D) initiative.

As author-blogger Pamela Geller noted this week, citing German press reports, more than one in two refugees from one camp went missing and are now unaccounted for and considered "on the run."

At least 580 refugees initially were reported to have disappeared from Camp Shelterschlefe.

Now, in a "terrible new twist," the disappearances are spreading.

"It’s become an epidemic," Geller said. "7,000 migrants have left the Brandenburg shelters. Where are they going? Who is sheltering these illegals, many with ties to ISIS?"

Such a high number of people hiding is "completely unacceptable," according to the German authorities.

"Where are they hiding? Could they be connecting with sleeper cells?" Geller writes.

"Is it any wonder that Europeans are scrambling for guns?" Geller added, referencing a report by WND earlier this week that long guns are flying off the shelves in Austria and other countries where it's still legal for average citizens to buy firearms.

Die Welt is reporting that thousands of refugees have left their assigned accommodations.

"They are simply not there anymore," the news outlet reports. Refugees disappear daily from the initial welcoming centers in Brandenburg without giving notice.

Authorities said they believed the missing persons to be heading on their own to stay with family or friends already in Germany or in other countries throughout Europe, or at least that's the hope.

Several hundred migrants have disappeared each week since the beginning of September without signing in, Ingo Decker, the spokesman of the Potsdam Ministry of the Interior, told Die Welt.

"Eventually, these refugees are simply not there anymore," he said.

On Wednesday alone, more than 600 people left the welcoming center, Susan Fischer, the deputy ministry spokeswoman, reported to the newspaper. According to official figures of the state government, more than 17,000 newcomers came into the country since early September. About 7,800 have been housed in cities and villages, about 2,700 people are still in the initial reception centers. That leaves at least 7,000 who have left and are AWOL.

A report from German news outlet Faz.net headlined "Refugees disappearing from lodging," says around 700 refugees disappeared from emergency accommodations in Lower Saxony. Voices calling for a direct registration by the governmental agencies are getting louder.

National authorities required cities and towns in the region to accommodate 4,000 on short notice and now can't account for all of them.

Paul McGuire, an analyst who has appeared on Fox News and the History Channel and co-author of the new book, "The Babylon Code: Solving the Bible's Greatest End Times Mystery," says the heavy influx of Muslim migrants almost assures there will be another terrorist attack at least as big as what happened in Paris earlier this year at the Charlie Hebdo newspaper office.

He said sources in Germany tell him the majority of the nearly 1 million migrants who have streamed into the country are between 18 and 25.

"There's no way they could be this stupid and let this many in. It has the look of something intentional," he said. "I'm getting emails from people in Germany. They know this is being done on purpose, to destroy their villages and towns."

McGuire said he was in France just a few days after the Charlie Hebdo attack.

"They were sitting ducks, and the people of France were completely shocked," he said. "So they're setting the stage for another attack."

McGuire said the leaders of the global "hardcore left," such as billionaire philanthropist George Soros, are using the Muslim migrants as a battering ram against the walls of the Christian West.

Hungary Prime Minister Viktor Orban was quoted by a public radio outlet this week calling out Soros for his backing of the migrant invasion, saying:

"His name is perhaps the strongest example of those who support anything that weakens nation states, they support everything that changes the traditional European lifestyle. These activists who support immigrants inadvertently become part of this international human-smuggling network."

McGuire said the Muslim migrants are particularly useful to socialist globalists like Soros.

"They are like a bludgeoning group, they can bludgeon everything Christian out of our society," he said. "The hard left uses them because they demand all these laws and special accommodations, and inevitably they enact Shariah and force the culture to go into retreat, and then you have this weak Christianity that can't withstand anything."

McGuire sees a perfect storm brewing in which global authorities will need to keep better track of people, especially refugees, but the new rules will end up applying to everyone.

"So these migrants are coming to drive the new world order, to bring order out of chaos," he said. "You destroy nationalism, destroy social cohesion, and then these Muslim groups coming in will create a crisis and force a response that will feature a state crackdown and the need for heightened security, and one of the ways you do that is through universal IDs. It's just evil."

A large portion of Germany's missing refugees had not been registered, nor had they applied for asylum, which is a recipe for chaos. The local authorities point out that they have no authority to hold people.

The same rules apply to refugees sent from the Third World to American cities.

Once they are resettled in a city, whether it's Denver or Minneapolis, Des Moines or Detroit, they are free to migrate anywhere in the United States. The refugees are placed on a fast track to full citizenship and signed up for various welfare benefits by resettlement agencies affiliated with Catholic, Lutheran, Episcopal, Jewish and evangelical-Christian organizations. A congressional research study found that 91 percent of refugees from the Middle East receive food stamps.

Like the in-depth reporting you see here? Sign up for free news alerts from WND.com, America's independent news network.

Local politician Angelika Jahns criticized the current situation in Germany. "We need to know who is staying in Lower Saxony," she told Die Welt. She said the refugees should be registered as soon as they arrive in Lower Saxony, but they are not forced to do so by the German national government.

The problem of refugees gone missing is clearly on the radar of global elites, and in fact they are already using the refugee crisis to promote a sweeping new global ID system, WND has learned.

The United Nations High Commissioner for Refugees in May 2015 awarded a three-year contract to a firm called Accenture to "identify and track" refugees in a pilot program targeting camps in Africa and Asia with a new biometric ID, reports FindBiometrics.com, a trade journal covering the biometric and information management industries. Accenture is an international technology services provider based in Chicago.

Here is how FindBiometrics describes the project:

"The UNHCR will use Accenture’s Biometric Identity Management System (BIMS) for the endeavor. BIMS can be used to collect facial, iris, and fingerprint biometric data, and will also be used to provide many refugees with their only form of official documentation. The system will work in conjunction with Accenture’s Unique Identity Service Platform (UISP) to send this information back to a central database in Geneva, allowing UNHCR offices all over the world to effectively coordinate with the central UNHCR authority in tracking refugees.

"Starting with a pilot project in the Dzaleka Refugee Camp in Malawi, the program has blossomed over the last couple of years to provide services in refugee camps in Thailand and Chad, with over 220,000 people identified in the two countries so far. It’s an ambitious project, but Accenture has experience with large-scale biometric system initiatives, having helped the Department of Homeland Security’s Office of Biometric Identity Management with a major border control project, for example. This latest endeavor will see the company’s technology used in important humanitarian efforts – and in fact it seems to have already helped hundreds of thousands."

This "universal ID," which grabs the biometric data of refugees, is just a starting point for the United Nations. The goal is to eventually bring all people into the massive data bank. The proof is in the U.N.'s own documents.

The U.N. Agenda 2030 document adopted by 193 of the world's heads of state, including President Obama, at the Sept. 25 U.N. conference on sustainability in New York, includes 17 goals and dozens of "targets."

Target 16.9 under the goal of "Peace, Justice and Strong Institutions" reads as follows: "By 2030, provide legal identity for all, including birth registration."

The World Bank is also throwing its weight behind the United Nations biometric project being conducted by Accenture.

In a new report issued in collaboration with Accenture, the World Bank is calling on governments to "work together to implement standardized, cost-effective identity management solutions," according to FindBiometrics.

A summary of the report states that about 1.8 billion adults around the world lack any kind of official identification. "That can exclude those individuals from access to essential services, and can also cause serious difficulties when it comes to trans-border identification," according to FindBiometrics.

"That problem is one that Accenture has been tackling in collaboration with the United Nations High Commissioner for Refugees, which has been issuing Accenture-developed biometric identity cards to populations of displaced persons in refugee camps in Thailand, South Sudan, and elsewhere. The ID cards are important for helping to ensure that refugees can have access to services, and for keeping track of refugee populations."

Then comes the final admission by the World Bank that the new biometric IDs are not just for refugees.

"Moreover, the nature of the deployments has required an economically feasible solution, and has demonstrated that reliable, biometric ID cards can affordably be used on a large scale. It offers hope for the UN’s Sustainable Development Goal of getting legal ID into the hands of everyone in the world by the year 2030 with its Identification for Development (ID4D) initiative."

It is a serious problem for the authorities that many thousands of people are on their way on their own in the federal territory, Decker told Die Welt.

He said refugees might be registered multiple times as the registration is based on information given by the registrants, which almost always come without any papers.

"The same guy that is Muhammad Ali here in Eisenhüttenstadt can be Ali Mohammed a little bit later in Hamburg," Decker said. "The states must live with that for the time being, because a proper registration at the border is currently not in sight."

Once the U.N.'s biometric labeling of all humanity is in place, this will no longer be a problem. 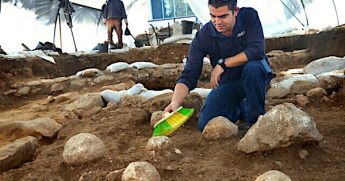