A college professor has taken to the New York Times to implore "white America" to go to "war" with itself over its alleged racism.

Professor George Yancy of Emory University published "Dear White America" as a "gift" for white people. His challenge: "White America, are you prepared to be at war with yourself, your white identity, your white power, your white privilege?"

Yancy, a black professor, told Times readers Dec. 24 that, just as he considers himself sexist, all white people should admit to possessing latent racism.

"I am asking you to enter into battle with your white self. I’m asking that you open yourself up; to speak to, to admit to, the racist poison that is inside of you. [...] As you reap comfort from being white, we suffer for being black and people of color. But your comfort is linked to our pain and suffering."

The "Pursuing Trayvon Martin" author goes on to say that asking about black-on-black violence is tantamount to rejecting his "gift."

"Some of your white brothers and sisters have made this leap. The legal scholar Stephanie M. Wildman, has written, 'I simply believe that no matter how hard I work at not being racist, I still am. Because part of racism is systemic, I benefit from the privilege that I am struggling to see.'

Not all of the newspaper's readers were willing to accept Yancy's "gift."

"I don't buy the premise that "existing as white" is racist. And I don't believe the tautology that disagreement is proof you are correct, and I am a racist," responded Cathy Hopewell of Junction, New York.

"The author continuously halted and encouraged the reader to take deep breaths for a message so shallow," added Kelsey from Philadelphia. "His message focused more on the assumption of responses to the article and the perception of the reader, rather than offering detail as to how and why being white automatically generates racism."

Yancy's argument, rooted in "white privilege" theory, has been around for years. Its acceptance in school districts across America, however, is a new development.

WND reported in June how schools in St. Paul, Minnesota, paid millions of dollars to a consulting company to train children in "white privilege" theory.

Pacific Education Group, a San Francisco based firm that claims to be “committed to achieving racial equity in education," helped implement the training in Minnesota. Its website cited 184 other school districts as clients before the company took down the list following public scrutiny.

Rev. Jesse Lee Peterson, a civil rights activist, founder and president of BOND (The Brotherhood Organization for a New Destiny), and author of "Scam: How the Black Leadership Exploits Black America," told WND that white privilege courses are destructive to all Americans.

"These classes will make another generation of blacks feel like victims and have them believing that whites owe them," said Peterson. "It will also continue to divide the races for years to come because whites and other non-blacks know that it's not fair to favor one group over another. Teaching that whites have an unfair advantage based merely on race is a lie and it's destructive. It reinforces the myth that whites are against blacks." 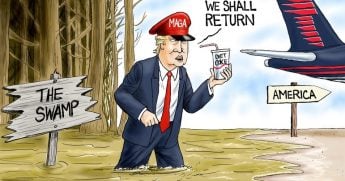