In fact, he was once a shy kid who never participated in a single athletic sport.

The Christian action star, author and exclusive WND columnist said his father wasn't an active part his childhood, and that void affected his personality.

"Because I didn't have a father image, I grew up very shy and introverted," he told a crowd of 2,400 people during the McLane Lecture Wednesday at the University of Mary Hardin-Baylor, a Christian college in Belton, Texas. "I was too shy to participate in sports, so I grew up non-athletic and very timid."

After high school, Norris joined the U.S. Air Force. While stationed in Korea, he had his first exposure to the martial arts. Norris enrolled in a Judo class, but while exploring the village one day, something caught his eye.

"I saw these guys doing these incredible kicks in the air. I didn't think the human body could do something like that," Norris said. "I wanted to find out what it was, but they looked mean, so I didn't go down and talk to them."

Instead, Norris returned to base and asked his instructor about what he'd seen, which turned out be a form of taekwondo. He knew from that moment he had discovered his new passion.

"I was so determined to learn this art, that I finally made my black belt in it," he said.

In his best-selling book, "Black Belt Patriotism: How to Reawaken America," Chuck Norris provides real solutions for solving the nation's problems, moving the country forward and changing its course for the better. Get it autographed from the WND Superstore!

Norris returned to the states and was stationed at March Air Reserve Base in Riverside, California. While he was practicing martial arts on the base, he was approached by several other airmen who wanted to learn these skills.

"I thought, 'I could start a club on the base, but if I go before an audience, I'll have to talk,"' Norris said. "I was 21 years old. I'd never gotten in front of anybody and talked before." Chuck Norris's wife, Gena, joins her husband at the McLane Lecture at the University of Mary-Hardin Baylor in Belton, Texas, on April 20, 2016 (WND photo: Cody Weems)

Norris decided he would write out a speech before giving a martial arts demonstration. On the night of the event, he was met with a gym full of people.

"I walked up to the microphone and said, 'Good evening. My name is Chuck Norris, and I'd like to welcome you here tonight," he said. "And that's the last thing I remember. Next thing I know, I'm walking out in the middle of the gym to give my demonstration."

To this day, Norris still doesn't remember if he was able to recite the rest of his speech. But he does believe that night was a breakthrough for him.

"The important thing is that I finally cracked that egg of insecurity that I had carried for 21 years," he said.

After leaving the military, he planned on joining the Los Angeles Police Department, but was put on a waiting list for the academy. In the meantime, began teaching martial arts in his mother's backyard and fell in love with the idea of teaching. Two weeks before he was supposed to report to the police academy, he decided to become a full-time instructor and opened a martial arts school with $600 he borrowed from his father. In an effort to get the word out about his school, Norris and three of his students traveled to Salt Lake City, Utah, to participate in a martial arts competition.

"My three students won, and I lost," he said. "As we were driving back, I thought about how I'd lost, and I said, 'I may lose again, but I'll never lose the same way twice.'"

At a competition in New York, he struck up a friendship with action star Bruce Lee. The two trained together for two years before Lee moved to Hong Kong to pursue his movie career. Norris later scored his first acting role when he squared off against Lee in the 1972 film "The Way of the Dragon."

After retiring from competition, Norris decided to pursue acting full time. He enrolled in acting school, and then wrote and starred in his first film, "Good Guys Wear Black," in 1978.

Filled with side-splitting humor, in "The Official Chuck Norris Fact Book," Norris gives readers not only his favorite "fact," roundhouse-kicked by the man himself, but also the stories behind the facts and the code by which he lives his life.

Norris would go on to have great success in Hollywood, as he starred in 24 action films. But the industry began to have a negative impact on his life.

"When I got into the film business, I was a strong Christian, but the film business can make you drift away from the Lord," he said. "All of a sudden, I was famous, I had a lot of money, but I had a real bad temper, and I had a drinking problem."

His actions led to a divorce of his wife of 30 years. Norris admitted he was headed down a wrong path until he was introduced to Gena O'Kelley, whom he would marry in 1998. It was Gena who helped Norris reignite his faith.

"I'd come over and pick her up for a date and she'd be reading the Bible," he said. "After a while, I started reading it too. Then all of a sudden, it was like the Holy Spirit said, 'It's time to come home.' If it hadn't been for my wife, I don't know where I'd be today."

With his acting career established, Norris again was called to teach. But this time, he felt a desire to reach out to less-fortunate youths.

"I was a martial arts teacher for 15 years, and I had worked with thousands of young kids and helped them in many ways. But these were kids who could come and pay the tuition to my schools," he said. "I realized there were millions of kids whose parents couldn't afford that."

With the help of former President George H.W. Bush, for whom Norris campaigned in 1988, Norris was able to establish Kickstart Kids, a martial arts and character development program for public schools.

In the early 1990s, Norris was approached by CBS to star in the television series, "Walker, Texas Ranger." He liked the concept of the show, but didn't agree with some of the risqué ideas the network had.

"I wanted the show to have enough action that the fathers would watch it, but not too much where the kids couldn't see it," he said.

CBS agreed to his terms, and for eight seasons Norris played the role of Cordell Walker, the Texas law enforcement officer who used martial arts to put bad guys in their place. The role took Norris from an action star to a pop culture icon. So much so that people started coming up with "Chuck Norris Facts," which often give Norris superhuman characteristics.

"My favorite one is that they wanted to put Chuck Norris on Mt. Rushmore, but the granite wasn't tough enough for his beard," Norris said.

Norris has been writing a weekly exclusive column exclusively for WND since Oct. 23, 2006. He is also a New York Times best-selling author of "Black Belt Patriotism."

UMHB's annual McLane Lecture is sponsored by Texas businessman Drayton McLane Jr. and his wife, Elizabeth. McLane Jr. At the event, he introduced Norris, whom he met through a mutual friend in former President George H. W. Bush.

"He stands for a number of truly outstanding things," McLane Jr. said. "Where he is today shows that we can become what we want to become with God's grace and by being humble about what we do." Student Kyle Tanner was given an opportunity to ask Norris a question during the lecture. Tanner joked about Norris' stoic reputation.

"He looked me straight in the eyes, and I didn't die, so that was amazing," Tanner said.

With the larger-than-life persona aside, Tanner found value in Norris' message.

"I'm really impressed by his hard work and dedication," he said. "He really believes you can do anything you set your mind to."

Another student, Andy Ramirez, said the action star's story is one of hope for the future.

"The odds were against him, but he still made something great out of himself," she said. "I think that's something that everyone can be encouraged by." Filled with side-splitting humor, in "The Official Chuck Norris Fact Book," Norris gives readers not only his favorite "fact," roundhouse-kicked by the man himself, but also the stories behind the facts and the code by which he lives his life. 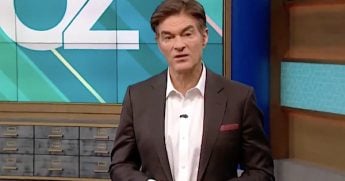