Perhaps because I wasn't expecting much from the recent town hall debate, I was pleasantly surprised by Trump's performance. If it wasn't a clear knock-out, it was, arguably, a TKO for the new comeback kid.

Having acknowledged that I believe Trump definitely won the fight, I can't help wishing that he, who has made immigration the cornerstone of his campaign, had brought up the fact that in the email dump that had taken place 48 hours earlier, Mrs. Clinton was found to have called for open borders at a South American conference.

Where I think Hillary did better than Trump was in her presentation. Whereas Trump performed as though it was a regular debate, she took advantage of the town hall format by approaching the folks asking the questions. It wasn't exactly vintage Bill Clinton, who made an art form out of biting his lower lip, conveying compassion and propping up his assertion that he felt our pain – sort of like an over-sexed Christ figure – the best that Hillary could do was to pretend to be interested in what the little people had to say.

But perhaps it was a good thing, after all, that Trump remained somewhat aloof, because if any of the participants had been a hottie, he might have been overcome by an urge to grab and kiss her.

I was delighted to see Trump display his humorous side, especially when he called Hillary out for contending that her role model for being two-faced on the issues was none other than Abraham Lincoln. Still, I found myself hoping he would say: "I knew Abe Lincoln. Abe Lincoln was a friend of mine. And you, Mrs. Clinton, are no Abe Lincoln."

Even if I didn't agree with Donald Trump on most of the issues, I would vote for him because of the justices he has vowed to appoint to the Supreme Court. It's not just that the Supremes have the final word these days on everything from abortions and photo IDs to religious rights and immigration, but because it's the court that would act as a check on Hillary Clinton if, like Barack Obama, she decided to legislate by executive edict.

It is what led me to write the following letter to both House Speaker Paul Ryan and Senate Majority Leader Mitch McConnell: "I'm afraid it's time for you to put on your big boy pants," I began.

"While it's true that Donald Trump is rude and crude, he has vowed to build up our military and select conservative justices for the Supreme Court.

"If he doesn't get elected, you will be dealing with President Hillary Clinton for the next four or eight years. That not only means she will replace Antonin Scalia with someone like Sonia Sotomayor, but that we will once again have a chief executive who will legislate with her phone and her pen. It also means that we will have a Supreme Court that will act as a rubber stamp when it comes to her various unconstitutional edicts.

"I understand that the GOP members of the House and Senate often prefer to have a Democrat in the White House because it provides them with a scapegoat, an excuse for doing nothing, and allows them to have more time to devote to fundraising for their re-election campaigns.

"Then, of course, you said the reason you couldn't get anything done was because the Democrats controlled the executive branch. And now, with the presidential election less than a month away, you're telling us that Donald Trump is too ill-mannered to be president.

One of my readers wrote to say "I saw TV coverage of the preview of the new 'Birth of a Nation.' It showed a rowdy crowd carrying Black Lives Matter signs, including 'Hands Up, Don't Shoot' and 'I Can't Breathe.' I plan to write to the manager of the TV station about showing that stuff at 7:30 p.m.

"I'm a Christian. God has given us free will and will not take it back from us. He allows it to rain on the just and the unjust. Much as we humans like to 'rate' sin, God hates all sins, not just the ones we categorize as horrific or unforgivable. It's probably a good thing I'm not in charge because I would be chopping off heads, at least until I remembered that I, too, need forgiveness."

In response, I wrote: "It's even luckier for some people that I'm not in charge because I'd probably be lopping off even more heads. The way I look at it, it's not as if they'd even be missed. After all, a great many people, especially those involved in the Black Lives Matter movement, never use their heads except as a perch upon which to place a baseball cap, pointed backwards of course." 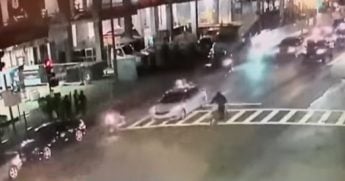 WCBV-TV screen shot 82-year-old goes out to pick up a turkey, ends up hospitalized after 'nightmare' with huge ATV gang