Upon first learning about the collision of the destroyer USS Fitzgerald with the Philippine-flagged cargo ship ACX Crystal on June 17, I thought something just did not seem right.

Although the collision occurred around 2:20 a.m., the warship still would have had a third of its crew on watch. It would have had its radar actively searching as well as numerous watchstanders on the bridge, to include lookouts. Wind nor sea state nor visibility appears to have played a role in the collision.

Crews on board commercial ships are much less active at such an hour. Usually, the ship is short-handed. They also lack the focus and discipline of those aboard a U.S. Navy vessel.

Because the Fitzgerald was entering into a heavily trafficked area – 10 miles off Izu peninsula, Honshu Island, Japan – and commercial ships are notorious for not paying full attention to navigation, sometimes even leaving the ship's autopilot unattended, the destroyer's crew would have been more attentive than normal about monitoring ACX Crystal's approach.

While it is still early in the investigation, investigators have pieced together the container ship's movements based on input provided by MarineTraffic, a vessel-tracking service. It is clear from the reconstructed course the commercial ship followed no standard course, which would have allowed the two vessels simply to pass in the night.

It now appears ACX Crystal sailed a most irregular course, raising the issue as to who was at the controls and what was the shiphandler's intention.

As the container ship first approached the warship, she made a feint toward the destroyer before veering away. After passing the warship on her port side, ACX Crystal inexplicably made a sharp turn of approximately 150 degrees to port – a course that still would have avoided a collision – had she not then adjusted it to put her right back on a collision course with Fitzgerald.

An interesting theory now being floated is that the initial feint toward Fitzgerald was an effort to activate an electronic warfare device that would disable the warship, leaving her unable to move or communicate. Once its effectiveness was observed, the container ship then reversed course to intentionally ram and sink Fitzgerald.

While the theory might sound like something out of a James Bond movie, it would explain why Fitzgerald, with both electronic and human monitoring and warning systems on alert, was unable to avoid a collision that nearly sank her. Depending on who was at the container ship's controls, it was either a terrorist act or an act of war.

One obvious suspect is ISIS. Not only because ACX Crystal is a Philippines-flagged vessel but because almost 50 percent of all commercial ship crews are Filipino, this crew undoubtedly was mostly Filipino as well. Currently, Islamic militants, known as the Maute group, are fighting Philippine government forces, assisted by U.S. special operations forces, for control of the city of Marawi. Maute has declared its allegiance to ISIS. Is it therefore possible ISIS is the catalyst in the attack?

Another possibility is that North Korea, which has demonstrated great skill in the cyberspace world, may have hacked into to the container ship's autopilot, with or without the assistance of a crewmember.

Undoubtedly, the investigation will include examining the backgrounds of certain crewmembers to identify any possible North Korean or ISIS links.

The possibility that an electronic warfare device of some sort may have been involved in this attack to disable Fitzgerald would lean more toward Pyongyang's involvement. It is doubtful ISIS would have had access research and development facilities allowing it to field such a device.

There is also the possibility, if such a device exists, it was developed by yet another state sponsor of terrorism – Iran. Just like the Germans prior to World War II used the Spanish Civil War as a testing ground for new weapons technology, Tehran may have "lent" such technology to its nuclear weapons development partner, North Korea, to test it out as well.

In any event, sinking destroyers is not new for North Korea. In 2010, one of its submarines sank the South Korean frigate Cheonan. Additionally, in 1968, Pyongyang – in an outrageous act of piracy – attacked and captured an American intelligence ship, USS Pueblo, in international waters. Today, it still maintains the ship in its possession. With neither South Korea nor the U.S. responding militarily to such egregious acts, perhaps Pyongyang's new leader seeks to do one better than his father and grandfather.

Again, while it may too early in the investigation to put together an evidentiary chain leading to Kim Jung-un's door, the fact the Fitzgerald suffered such a collision while equipped with the most modern technology to avoid it and while manned by the Navy's best smacks of foul play.

Songwriter Gordon Lightfoot was so moved in 1975 by the sinking of the ship Edmund Fitzgerald, he published a most memorable song about it two weeks later. The song's closing lyrics note:

The church bell chimed till it rang 29 times
For each man on the Edmund Fitzgerald.

It is 42 years later and, as another ship bearing the name Fitzgerald suffers a tragedy, we hear a church bell chiming seven times for those lost in the collision.

To this day, the real cause of Edmund Fitzgerald's loss remains a mystery. Hopefully the cause of this Fitzgerald's collision will not. And, should the evidence lead to Kim's door or elsewhere, military action to avenge it must follow.

Lt. Col. James Zumwalt
Lt. Col. James G. Zumwalt is a retired Marine infantry officer who served in the Vietnam war, the U.S. invasion of Panama and the first Gulf war. He is the author of three books on the Vietnam war, North Korea and Iran as well as hundreds of op-eds.
Which came first: Racism or systemic racism?
Bryant shooting: The question anti-cop critics need to answer
Did Dems & media hand Chauvin the keys to his cell?
Maxine 'Troubled' Waters must be removed from Congress
Pelosi: Time to put the old gray mare out to pasture
See more...

'Not a vacation': Whitmer claims she had perfectly good cause to visit Florida 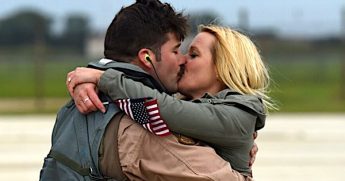