Hatred is contempt without the requirement of offense. Normally, there's a reason for getting angry; being violated comes first, then reaction. That's the common sequence, unless you suffer from what I call P.H.D. Put another way, hatred is hostility without cause and revenge without conscience.

Usually, what people do to us and what they say determine how we assess their character, but some progressives judge us only by affiliation. Our actions and character seem to be irrelevant. For example, if you're devoutly religious, you're homophobic, even if you volunteer as an AIDS hospice nurse. If you're conservative, you're heartless, even if you dig wells in malaria-infested African villages. If you're concerned about illegal immigration, you're racist, even if you're married to a legal immigrant. If you're unborn, you are not human, even if you have a heartbeat, brain waves and smile during an ultrasound. This indifference to facts,this robotic prejudice and anti-social, emotionally autistic blindness resemble dementia.

George Bernard Shaw put it this way, "Hatred is the coward's revenge for being intimidated." Nothing intimidates and frustrates socialists more than free speech, economic and religious liberty, freedom of conscience, and property and gun rights. Founding Father James Madison observed, "Conscience is the most sacred of all property."

This column is a blueprint of how progressives strive to dispossess Americans of their God-given liberty, especially freedom of conscience. They know from history that once the spirit is broken, the body follows submissively. When the rule of law is forsaken, the spirit of a nation cannot long resist being usurped. Here are three pillars of Progressive Hate Dementia:

1. A Moral Compass is Not Needed

Morals come from God – morals that are the greatest threat to socialism. Secular rage is their battle plan. P.H.D. is fueled by revenge against successful people, talented, religious and happy people. Here's the bad news. Revenge is not the answer, even for real victims. Revenge turns victim into perpetrator. It wounds our conscience while we seek a remedy. It clips our wings while we try to fly away.

Without a moral compass, protests turn into violence, greed into looting, anger escalates to murder, libido into rape and religious bigotry into "love wins" bitter rants.

From my ebook, "The Joy of Fracking – A Haiku Guide to Loving Earth, Freedom and Fossil Fuels":

Beware the death of
Tyrants; they leave fresh poison
In the victor's cup …
LOVING FREEDOM

The most durable form of slavery uses laws as chains. There have been more atrocities committed within the law than outside of it. Last century alone, over a hundred million people died under regimes that legally denied people religious expression, economic freedom and property rights. Our Founding Fathers also knew this cycle of oppression: The United States Constitution and the Bill of Rights were its antidote.

Elitism is at the root of tyranny. For instance, holocausts follow a pattern of elitism. A group is targeted, then dehumanized, then killed. Extracting wealth from the death of innocents is an essential element of holocausts. This pattern of elitism occurs today; for example, the abortion holocaust has political support, collaborators and profiteers. Human fetuses are targeted as unwanted, defined as not yet human, then millions are made by clinics for legally slaughtering them.

Here are the four steps of a holocaust: 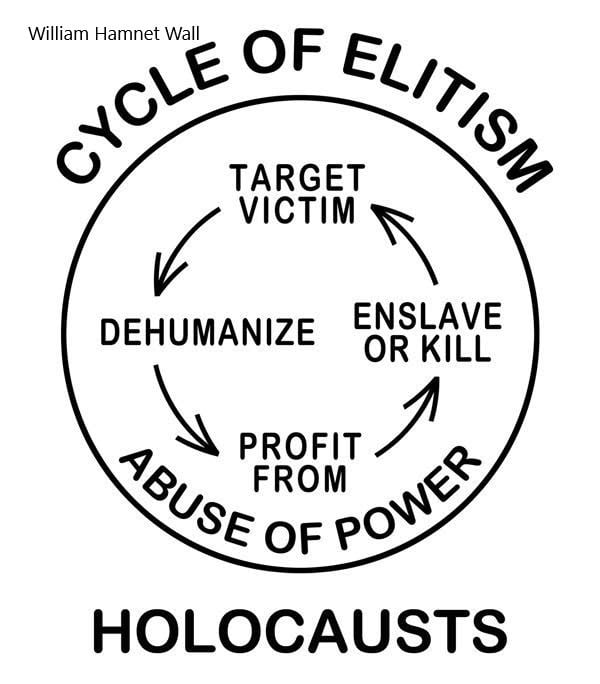 Have you ever noticed that a dog must be upset and excitable to bark? It's because his limbic system is more primitive than ours. In dogs, frantic emotions and "speech" are irrevocably connected because their powers of reason are not evolved. So P.H.D. speaks out only when upset, "victimized" or triggered by opposing ideas and free speech. This is exactly why chaos and division are required for socialist revolutions. Progressive Hate Dementia is the voice of freedom dying, and if unchecked, will be the death rattle of Western civilization struggling feverishly against her enemies.

Zealots burn science books, too. Don't be fooled that progressives are on the side of science and freedom. A cursory look at history shows that violent progressive governments hurt people more than liberate them. This is the dementia of socialism: that self-reliance is an imposition on people while the dispossession of wealth shows kindness. Here's the dirty little secret of socialists: Dependency upon the state cannot grow and poverty decrease at the same time.

3. Constitution and Bill of Rights are Obstacles to Progressives

Why has America resisted socialism longer than Europe? Because American history shows that our self-reliance gene, our DNA is that of people who fled Europe like it was a burning building. Our Constitution was constructed specifically to escape European elitism and religious bigotry.

Lately, Europe has embraced an equally elitist model as that of monarchy; they call it socialist democracy, home of where majority vote rules. Sounds good, but here's the problem. Mob rule is no less a threat to a nation's minorit, than monarchy and dictatorship are to its majority. Benjamin Franklin's quip applies here: "Democracy is two wolves and a lamb voting on what to have for lunch."

In all of history, only our Constitution and Bill of Rights valiantly endeavor to protect the liberty of the minority. In a letter to Jefferson, James Madison put it this way, "Wherever the real power in a Government lies, there is the danger of oppression. In our Governments, the real power lies in the majority of the Community (my emphasis), and the invasion of private rights is chiefly to be apprehended, not from the acts of Government contrary to the sense of its constituents, but from acts in which the Government is the mere instrument of the major number of the constituents." (my emphasis, letter to Thomas Jefferson (Oct. 17, 1788)

"We are attacked by ideas we conquered long ago." said Nietzsche. Have we learned our lesson? Unfortunately, history says maybe.