Last week's column on the constitutionality of legalizing marijuana was a real humdinger, at least as far commentary was concerned. Last time I looked, there were 190 posts. I'm heartened to see so many of my readers got the point. Of course, there was the usual crowd who just couldn't seem to understand that marijuana was not the subject of the column.

You know, back in 2008, President George W. Bush was interviewed by CNN on his policies with the then-ongoing economic crash. I'll never forget the most important takeaway line from that interview, when Mr. Bush said: "I've abandoned free-market principles to save the free-market system."

Similarly, far too many proto-conservatives are all too willing to abandon or ignore the Constitution to "save" it. If you fall into that category, then just remember one thing: If the Constitution of the United States is not the supreme law of the land, then all it is is a piece of interesting ephemera in a glass box. And if the sovereign states that make up our united nation are not protected by the federal-limiting power of that Constitution, then we might as well bust the borders and drop three words off the name of our country.

Now, on to other things. Today I want to go over some of the common mistakes made by new and not-so-new preppers. I've done this before piece-meal, but these potential errors bear repeating. One of the major points of this column is to get new preppers walking the path that leads to self-dependence, and to provide guideposts along the journey. There's no reason each new traveler on that road needs to reinvent the wheel.

So below are some of the most common prepper errors.

Prepping correctly takes a great deal of time, effort and money. For most of us, these things are in limited supply, but we make the effort because we recognize preparing for threats to the safety and security of ourselves, our friends and families, and our community is a prudent action. You should always prep first for the most likely problems. This includes such emergencies as a job loss, illness, and other short-term conditions. Remember, short-term prepping is the first step towards long-term prepping. The things that you do to get ready for a blizzard will also be fundamental to preparing for wider or more catastrophic events.

Failure to keep a secured set of emergency documents

I can't tell you how many people I know who haven't gotten around to securing the important documents of their lives. You should have both paper and digital copies of birth certificates, drivers licenses, Social Security cards, insurance policies, prescriptions, passports and other necessary documents kept in a location away from your residence with trusted friends, or cached in a waterproof box away from your home, or even (shudder) in a bank security box.

Failure to join (or create) community

I know, I know. I've been nagging on this for a long time now. But honestly, you cannot go it alone. As I've said many times, I'm a prepper generalist. There are a lot of things I can do as a result of my many years of education, experience and training, but there is no way I could be dropped into the wilderness and survive for any great length of time unaided. And if you think you could, give it a try. Even the famed mountain men of the mid-1800s could not have survived without the ability to gather with others and sell the fruits of their labor – notably the furs they collected – in exchange for the items that they simply could not produce or acquire elsewhere. And most of those legendary loners spent their winters in settlements, forts or Indian villages.

In the event of a long-term disaster or collapse, just the needs of security alone will require a number of people, because you can't watch your back and your front at the same time.

Failure to learn before you do

Save yourself the frustration and (potentially physical) agony that can come from ignorance. No matter what you're trying to do, it's a sure bet someone else has tried it already. Make sure you find those people, and use their experience to determine your best path.

Too many preppers jump into projects without a real understanding of what they entail. For example, the world is littered with beehives containing no bees because budding beekeepers never bothered to notice that no one in their area kept bees. Maybe it's because the local vegetation doesn't provide sufficient pollen for apiary enterprises. Maybe it's because the weather is too harsh. Or maybe you're the first to try it. But before you invest your time and money in such projects, you should find out why no one else is doing it, and then decide if those projects are worth the effort, time and money.

Failure to pace yourself

Work on your prepping at a steady and continuous rate. Don't allow yourself to be driven into unwise decisions or purchases on the basis of sensationalized news reports or the panicky fears of others. Make your plans for the acquisition of prepper supplies logically and within your ability to pay. The end of the world has been announced daily, pretty much forever. One of these days it'll be true; but the odds are in your favor that today is not that day. Which leads us to …

Failure to stay out of debt

Buying prepper supplies on credit is a numbskull maneuver. Rather than carry that burden, decide to invest a portion of whatever disposable income you may have in prepper supplies or education or training. If you don't believe you have any disposable income, take another look. While I do know a few people who are really on subsistence incomes, most everybody has some "wants" they classify as "needs." If that applies to you, just shift a few of those wants. Don't tell me it can't be done. I've done it for years.

Moderation in all things. It's amazing the number of folks I know who eat, sleep and breathe prepping. It's all they talk about. They're the Pharisees of self-dependence. Wish one of these apostles of disaster a "good morning" and be prepared to hear the predictions for a bad afternoon.

There are 300 million-plus American citizens. The odds that black helicopters are circling your house specifically are pretty low. Take a deep breath and prep for the joy of being self-dependent. Then go see a movie or play miniature golf.

Finally for today, and akin to not going it alone, make sure you embrace a consistent, logical, and divinely inspired moral code. Personally I chose the one provided for free by the Prince of Peace. But whatever you choose, understand that without such a moral code, human beings are nothing but animals. And in dire times, animals are prey. Besides, if the stuff ever really hits the fan, no matter what happens, you'll never be alone.

Next week, we'll continue with a few more don'ts. But until then, enjoy the movie … and get prepared.

Don't freak out! Trump or Biden, things will get better 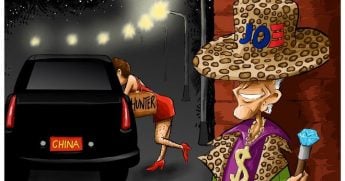