There's an old saying about not taking a knife to a gunfight.

But one college in Michigan says a thousand or more hockey pucks is better than a knife any day.

It's Oakland University in Auburn Hills that has begun arming its faculty and some students with hockey pucks to use as a "last resort" should there ever be an active shooter on campus.

The Detroit News reports it was Mark Gordon, the police chief at Oakland, who said the idea was proposed during a training session on active shooters.

"Gordon, a former youth hockey coach, said since the university has an ordinance against weapons, one attendee asked what staff and students could bring to prepare themselves for a fight. He recalled once being struck in the head with a puck and said it 'caused a fair amount of damage to me,'" the News reported.

"It was a spur-of-the-moment thing that had merit to it and kind of caught on," he xplained.

Gordon explained in the report that there's a lack of research on the benefits of throwing pucks at a shooter, but a puck would provide an "adequate defense posture" alongside chairs, staplers or anything else that can be thrown, the report said.

Endorsing the plan was the American Association of University Professors, whose executive committee decided to start buying and handing out pucks.

"We thought 'yeah, that is something that we can do,'" Discenna told the News. "We can make these available at least to our members and a fair number of students as well."

The pucks are 94 cents each and the union already has spent $2,500 to hand them out to 800 faculty members and 1,700 designated for students.

"Ideally, Gordon said, dozens in a single classroom could be armed with pucks – or other objects – and could all throw them at the same time, if necessary," the News explained.

The school's training includes the standard advice to run if you can, or hide as a second choice, and if forced into it, fight.

That's where the pucks are important.

"Garry J. Gilbert, director of the journalism program at Oakland University, said when he first heard the idea, he was skeptical. But he signed up two weeks ago for the training held in a classroom on the university's campus," the News said.

"My first reaction was: You are talking about facing an assault weapon and asking us to fight back with hockey pucks? It sounded silly," Gilbert said. "Then I went through the training session, and it all made sense. None of us want to face an armed assailant. Students will look to us for leadership in a situation like that.

"If we fight back, this idea makes as much sense as anything else," he said. 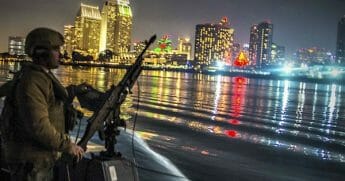 'Not a dictator': N.Y. vows fight to stop Trump from deploying military