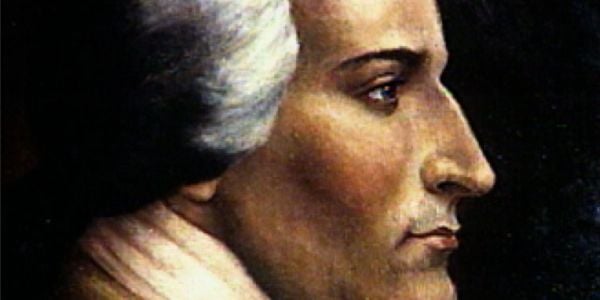 Oath of military enlistment: "I, _____, do solemnly swear (or affirm) that I will support and defend the Constitution of the United States against all enemies, foreign and domestic. ..."

Who were some of the most famous "domestic" enemies?

Another painful betrayal during the Revolution was that of Benedict Arnold. Benedict Arnold was one of America's most popular leaders, renown for helping Ethan Allen capture Fort Ticonderoga in 1775. Arnold fought courageously on Lake Champlain at the Battle of Valcour Island in 1776. He fought in the Battle of Ridgefield, Connecticut and came to the rescue at the Siege of Fort Stanwix. Benedict Arnold was considered the hero of the pivotal Battle of Saratoga in 1777, leading a daring flanking charge, though he disobey a direct order to do so.

Shot in the leg in the battle, his career was sidelined for a season. Arnold was given the position of military commander of Philadelphia. Philadelphia was the largest city in America at the time, with a population of 43,000; followed by New York City with 25,000; Boston with 16,000; Charleston with 12,000; and Newport, Rhode Island with 11,000.

A year earlier, when the Americans lost the Battle of Brandywine, Sept. 11, 1777, the British Army, under General William Howe, had occupied Philadelphia. As Philadelphia had a significant population of Quakers, who refused for religious reasons to take up arms in defense of America, citizens who were still loyal to Britain could blend in.

While military commander of Philadelphia, Benedict Arnold became captivated by Peggy Shippen, the daughter of a wealthy loyalist-leaning judge. At the same time, Arnold was accused of using his position for his own financial benefit and, as a result, had to endure a court-martial trial. Arnold and Peggy were married in 1779.

During the draining trial, Arnold boldly accused his prosecutors of being disloyal to the patriot cause. He was eventually cleared of wrong-doing, but the ordeal, along with his being passed over for promotion, confirmed to his loyalist-leaning wife, Peggy, that the Americans did not appreciate her husband.

Meanwhile, Arnold incurred much debt attempting to maintain his wife's upper-class lifestyle. All the while, Peggy had maintained communication with a British spy in Philadelphia named Major John Andre. After a year of coaxing, Peggy finally convinced Benedict to meet with Andre.

That same year, 1779, the Continental Congress declared a Day of Public Prayer to Almighty God. Virginia Governor Thomas Jefferson observed this by signing a State Proclamation of Prayer: "Congress ... hath thought proper ... to recommend to the several States ... a day of public and solemn Thanksgiving to Almighty God, for his mercies, and of Prayer, for the continuance of his favor. ... That He would go forth with our hosts and crown our arms with victory; That He would grant to His church, the plentiful effusions of Divine Grace, and pour out His Holy Spirit on all Ministers of the Gospel; That He would bless and prosper the means of education, and spread the light of Christian knowledge through the remotest corners of the earth. ... I do therefore ... issue this proclamation ... appointing ... a day of public and solemn thanksgiving and prayer to Almighty God. ... Given under by hand ... this 11th day of November, in the year of our Lord, 1779 ... Thomas Jefferson."

The next spring, April 6, 1780, General Washington issued the order from his headquarters at Morristown, New Jersey: "Congress having been pleased by their Proclamation of the 11th of last month to appoint Wednesday the 22nd instant to be set apart and observed as a day of Fasting, Humiliation and Prayer ... there should be no labor or recreations on that day."

General Benedict Arnold lobbied General Washington to put him in charge of West Point, which he did on Aug. 3, 1780. Because of Arnold's previous heroic reputation, Washington had a blind spot when it came to suspecting Arnold's betrayal.

The fort at West Point was America's largest and most important fort, designed by the Polish freedom fighter Tadeusz Kosciuszko. West Point controlled the Hudson River Valley, which stretched from near Canada in the North to New York City in the south. The Hudson River effectively divided colonial America in half, with the New England Colonies on the east and the Middle and Southern Colonies on the west. The surrender of West Point would have split the country and possibly cost the Americans the War.

By Aug. 30, 1780, General Benedict Arnold not only agreed to betray West Point, but he would do so on the very day General Washington would be there, so that Washington could be captured. In exchange for this betrayal, Benedict Arnold would be paid 20,000 British pounds, the equivalent of one million dollars today.

Arnold intentionally weakened West Point's defenses by neglecting repairs and removing supplies, all the while complaining to General Washington of shortages. General George Washington and Major-General Lafayette decided to ride to West Point to inspect its defenses. The trap was set.

Talking too long, Andre missed the rendezvous with his British boat. This was due in part to some Americans, by chance, spotting the waiting British boat and firing shots at it, causing it to retreat down river.

Arnold then had Andre dress as a civilian and take the risky route back to the British lines by land, with the map of West Point hidden in his stocking. Historians question why Arnold did not take more precaution to keep Andre from being caught, and concluded that Arnold may have been somewhat blinded by his resentment toward the younger and more handsome Andre for the close relationship Andre maintained with his wife, Peggy.

Andre had almost made it to the British lines when, providentially, some random American sentries spotted him in the woods and decided to stop him for questioning. Trying to talk his way out of why he was there, the sentries were unconvinced. They searched him once and again. They almost let him go when they decided to make him take off his boot. There, in Andre's sagging stocking, they found the folded up map of West Point.

The American sentries arrested Andre and immediately sent word to General Benedict Arnold, who was waiting for General Washington to arrive at West Point for breakfast, where he would be captured. Major James McHenry, for whom Fort McHenry was later named, rode ahead to let Arnold know that Washington had been delayed.

By the time Major McHenry arrived, Benedict Arnold had realized his plot was discovered and he fled to the waiting British ship, HMS Vulture. His wife, Peggy, feigned insanity to avoid being questioned by Washington.

Washington offered to do a prisoner exchange with the British. He would return John Andre to the British in exchange for Benedict Arnold being returned to the Americans. The British refused.

Benedict Arnold joined the British ranks, where he fought and killed Americans, even burning the city of New London, Connecticut, in 1781.

The day after Arnold's plot was thwarted, American General Nathaniel Greene reported Sept. 26, 1780: "Treason of the blackest dye was yesterday discovered! General Arnold who commanded at West Point, was about to ... give the American cause a deadly wound if not fatal stab. Happily the treason had been timely discovered to prevent the fatal misfortune. The providential train of circumstances which led to its discovery affords the most convincing proof that the Liberties of America are the object of divine Protection."

The Continental Congress issued a Day of Thanksgiving, Oct. 18, 1780: "In the late remarkable interposition of His watchful providence, in the rescuing the person of our Commander-in-Chief and the army from imminent dangers, at the moment when treason was ripened for execution. ... It is therefore recommended ... a Day of Public Thanksgiving and Prayer ... to confess our unworthiness ... and to offer fervent supplications to the God of all grace ... to cause the knowledge of Christianity to spread over all the earth."

John Jay, who was later appointed by George Washington as the first Chief Justice of the Supreme Court, stated Sept. 8, 1777: "This glorious revolution ... is distinguished by so many marks of the Divine favor and interposition ... in a manner so singular, and I may say miraculous, that when future ages shall read its history they will be tempted to consider a great part of it as fabulous (exaggerated). ... Will it not appear extraordinary ... like the emancipation of the Jews from Egyptian servitude."