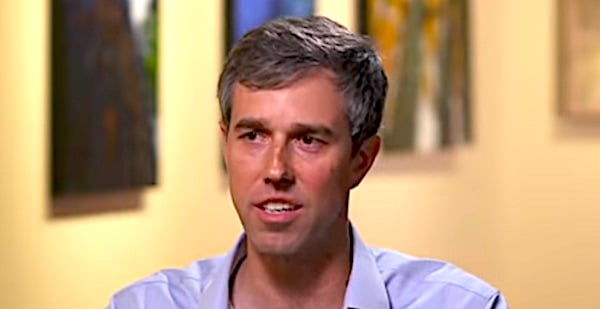 A man at a hall event in South Carolina for 2020 Democratic hopeful Beto O'Rourke was booed for urging America to return to God and prayer in schools in response to an epidemic of mass shootings.

"I grew up with goals, I'm the son of immigrants, we prayed in school, the worst problem in school was chewing gum under the desks," the man said when given the microphone at the Seminar Brewing Company in Florence, South Carolina, on Tuesday, Breitbart News reported.

Members of the audience responded with boos.

Another shouted, "Nobody wants to hear you, give the mic back!"

The man continued, however, Breitbart reported.

"The only thing that can save America is the word 'Jesus,'" he said, further angering the crowd.

"Separation of church and state!" an O'Rourke supporter said.

"Shut up! And go to church!" shouted another.

But an onlooker interjected, "I don't."

Breitbart said that while O'Rourke asked the crowd to let the man finish, the former congressman later said "my bad for giving the mic out."

The campaign charged the publication walks a line
"between being news and a perpetrator of hate speech."

“Beto for America believes in the right to a free press and works hard to ensure the campaign reflects that,” Aleigha Cavalier, O’Rourke’s national press secretary, said in a written statement to Politico. "However, whether it’s dedicating an entire section of their website to 'black crime,' inferring that immigrants are terrorists, or using derogatory terms to refer to LGBTQ people, Breitbart News walks the line between being news and a perpetrator of hate speech."

The 2020 candidate, who is polling at about 2 percent nationally, insisted the rise of violence in America had nothing to do with lower church attendance.

O'Rourke blamed "assault" weapons and "weapons of war," saying, "Keep that s--- on the battlefield."