The growing influence of Islam is behind an increasingly anti-Semitic and anti-Israel sentiment in the Democratic Party, a Republican congressman contends. 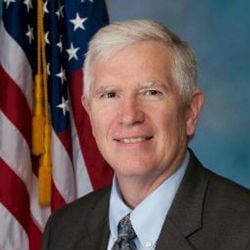 "Usually, there is not much controversy with respect to Israel," Brooks observed on "The Jeff Poor Show" on Wednesday. "Usually, the United States Congress is overwhelmingly close to 100 percent, if not 100 percent, in support of recognizing Israel as a long-term American ally, and that we have a mutual defense relationship.

"Unfortunately, we now have people in the United States Congress who view Israel as an enemy, and that makes for an entirely different mix of conversation."

Leading the overtures against Israel – including support for the Boycott, Divest, Sanction, or BDS, movement – are Muslim freshmen Reps. Ilhan Omar, D-Minn.; and Rashida Tlaib, D-Mich.

Brooks said the shift is "based on the growing influence of the Islamic religion in the Democratic Party ranks."

"Keep in mind – Muslims more so than most people have great animosity towards Israel and the Jewish faith," he said. "And as you have more and more Muslims in the United States, as they gain greater and greater influence in elections, particularly in Democratic Party primaries."

He said "you're going to see more and more people like Ilhan Omar, Rashida Tlaib and company that are anti-Israel, and that brings an entirely different viewpoint into the United States Congress."

Meanwhile, President Trump has stirred controversy this week by questioning Jewish Americans who vote Democratic even as some of the party's leading voices oppose Israel.

"Where has the Democratic Party gone? Where have they gone where they are defending these two people over the state of Israel?" he asked reporters at the Oval Office on Tuesday, referring to Omar and Tlaib.

"I think any Jewish people that vote for a Democrat, I think it shows either a total lack of knowledge or great disloyalty," he said.

On Wednesday, in an interaction with reporters on the South Lawn of the White House, he said, "If you vote for a Democrat, you're very, very disloyal to Israel and to the Jewish people."

Jewish groups have criticized his use of the term "disloyal," arguing it echoed anti-Semitic tropes about the loyalty of American Jews.

The president has insisted his comments were not anti-Semitic. Fox News host Martha McCallum suggested in an exchange with Juan Williams on "The Story" that Trump was "just pointing out how that voting bloc has voted before."

"It reminds me of what people have said about Catholics and Democrats," she said Tuesday after Trump's remarks in the Oval Office.

"Are you pro-choice, or pro-life? You know, a lot of people say, 'Well, how could you possibly vote Democrat if you’re pro-life?' And to me, it’s a somewhat similar discussion, different topic," she said.

Williams said he thinks "this is a little dicier."

"I understand your point, I take it to heart. But I think when you start to go down that path, you put the Jewish community in a very delicate position," he said.

"No. Liberal Jews (I grew up as one) vote for Democrats because of liberal ideology. That 'trumps' any loyalty to Israel," he wrote on Twitter.