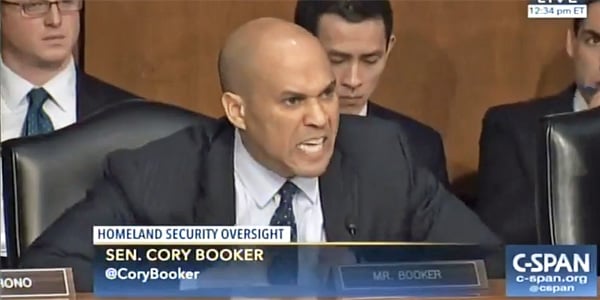 It's the type of fight that President Trump and the GOP probably like to see.

This one has Sen. Cory Booker, D-N.J., a 2020 presidential candidate, fighting with the Washington Post, which has a Lean Left bias rating from AllSides.com.

And the subject is Russia.

It was a statement from Booker during this week's Democratic debate that got it started.

He said the Democrats lost Michigan in 2016 to Donald Trump because the Russians were suppressing the black vote.

He claimed, "We lost the state of Michigan because everybody from Republicans to Russians were targeting the suppression of African American voters."

In fact, Trump got nearly 11,000 votes more than Hillary Clinton among about 1 million votes.

The Washington Post's famed fact-checker gave Booker "four Pinocchios," which in essence is calling his claim a "whopper."

The Post explained black voter turnout was down slightly from previous elections when Barack Obama was on the ballot. But there wasn't any evidence Russian propaganda or other "suppression efforts" lowered the turnout.

"Give. Me. A. Break," responded Booker campaign manager Addisu Demissie.

He pointed out Richard Hasen, a University of California political science professor, concluded: "There is certainly credibility to the idea that Russians targeted African Americans to suppress their vote. ... It is also true that Republican legislatures and election officials in some states have passed laws and enacted procedures that appear aimed at making it harder for likely Democrats to vote, and African Americans are the most reliable Democratic voters."

However, Hasen said he has seen "no evidence that the extent of these activities in the state of Michigan were responsible for the depression of turnout in the African American community such that it swung the vote in Michigan to Trump."

"In this essay I’m going to outline all the ways Russians and Republicans tried to get African American voters to 'boycott' the election and then conclude that didn’t impact an state decided by 10,700 votes," she said.

Booker said, "I will be a person that tries to fight against voter suppression that can activate and engage the kind of voters and coalitions that are going to win states like Michigan and Pennsylvania and Wisconsin."

Adams wrote that the "problem with Booker’s allegation is that it is almost certainly false."

"Booker can claim Russian operatives sought to exacerbate racial tensions by targeting African Americans on social media. There is ample reporting to back that claim. It is also true that African American turnout in 2016 was weak overall. But there is nothing to show Russian memes convinced black voters to stay to home on Nov. 8, 2016. There is certainly nothing that allows one to say with any sort of certainty that Russia 'suppressed' the black vote."