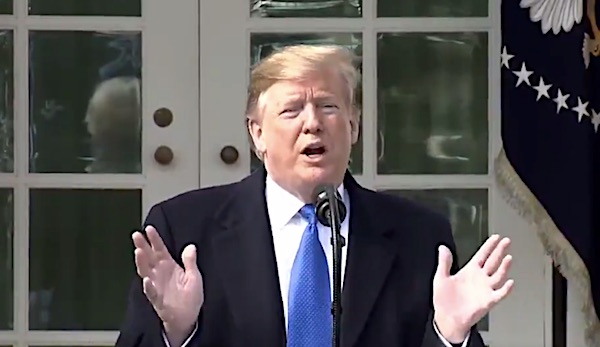 They've been triggered by the weekend shootings in Ohio and Texas that cost dozens of lives.

The earlier threats against the president were highlighted by Joe Biden's desire to "beat the hell" out of the president.

The newest verbal onslaught came from, among others, Democratic president candidate Beto O'Rourke. Even the left-leaning CNN said he was reacting "angrily."

O'Rourke charged that the president was promoting violence.

"You know the s--- he's been saying. He's been calling Mexican immigrants rapists and criminals. I don't know, like, members of the press, what the f---? Hold on a second. You know, I — it's these questions that you know the answers to," he said.

"Such a bulls—t soup of ineffective words," he wrote in a Twitter statement shared by his staff in response to Trump's remarks about the shootings.

Rep. Tim Ryan of Ohio tweeted: "Fck me" after Trump discussed the shootings.

Earlier, Ryan said: "Mitch McConnell needs to get off his a-- and do something."

A day earlier, he said, "Republicans need to get their s--- together and stop pandering to the NRA."

A little more civilized in their language, but nonetheless harshly critical of the president, was South Bend, Indiana, Mayor Pete Buttigieg and others.

He accused the president of stoking "many of these feelings" of white nationalism.

Sen. Kamala Harris, D-Calif., also lashed out at the president.

"We have a president of the United States who has chosen to use his words in a way that have been about selling hate and division among us," she said.

Sen. Bernie Sanders said: "I say to President Trump, please stop the racist anti-immigrant rhetoric. Stop the hatred in this country which is creating the kind of violence that we see."

Julian Castro, a former mayor of San Antonio, said Trump should "try and unite Americans instead of fanning the flames of bigotry."

Biden is not the only one to use the language of physical violence.

Booker has said: "Trump is a guy who you understand he hurts you, and my testosterone sometimes makes me want to feel like punching him, which would be bad for this elderly, out-of-shape man that he is if I did that. This physically weak specimen."

Then there was the "impeach the mother----r" comment from Rep. Rashida Tlaib, D-Mich.

Madonna talked about blowing up the White House.