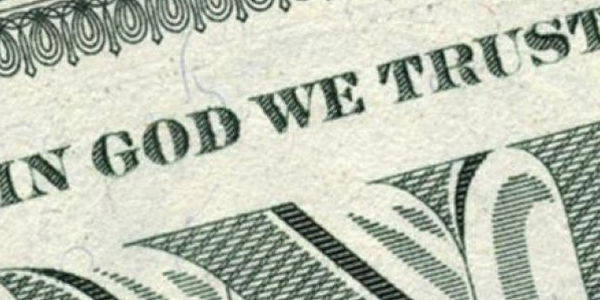 "In God We Trust" is America's national motto.

Democrats, who who famously booed the mention of God in their party platform, now have condemned "religious liberty" and praised the religiously "unaffiliated."

At a summer meeting in San Francisco, the DNC adopted a resolution concerning the "nonreligious."

It explains that the the "Religiously Unaffiliated Demographic has tripled in the last two decades, now representing 25 percent of the overall American population and 35 percent of those under the age of 30."

And the "nonreligious have often been subjected to unfair bias and exclusion in American society, particularly in the areas of politics and policymaking where assumptions of religiosity have long predominated."

"WHEREAS, those most loudly claiming that morals, values, and patriotism must be defined by their particular religious views have used those religious views, with misplaced claims of 'religious liberty,' to justify public policy that has threatened the civil rights and liberties of many Americans, including but not limited to the LGBT community, women, and ethnic and religious/nonreligious minorities.

"BE IT RESOLVED, that the DEMOCRATIC NATIONAL COMMITTEE recognizes: 1. The value, ethical soundness, and importance of the religiously unaffiliated demographic, a group of Americans who contribute in innumerable ways to the arts, sciences, medicine, business, law, the military, their communities, the success of the Party and prosperity of the Nation; and 2. That religiously unaffiliated Americans are a group that, as much as any other, advocates for rational public policy based on sound science and universal humanistic values and should be represented, included, and heard by the Party."

The Secular Coalition of America embraced the statement.

"Nonreligious Americans want to work with people of all faiths to build an effective government that serves and protects all of our rights equally," Sarah Levin, the director of governmental affairs for the organization, said in the Examiner report. "At the end of the day, it is critical that all political parties embrace and work with the secular community to ensure that policy is driven by science and evidence, not sectarian beliefs. Religiously unaffiliated Americans strongly identify with secularism, and will fight to protect the separation of church and state."

WND reported in June the DNC, in apparent acknowledgement that the party has a "God problem," hired a religious outreach director.

Rev. Derrick Harkins, who held a similar position in 2012, is former senior vice president of Union Theological Seminary in New York City, which recently celebrated "rejoicing in the queerness of God."

Democrats have alienated themselves from many religious voters by promoting abortion and same-sex marriage. In 2016, Trump won 80 percent of the white evangelical vote.

During the 2012 Democratic National Convention in Charlotte, delegates booed, jeered and shook their fists when the chairman, Los Angeles Mayor Antonio Villaraigosa, affirmed the adoption of an amendment to the party's platform that restored a mention of God.

He had to call for a vote three times before he could make the declaration that, in his opinion, the ayes made up two-thirds of the vote.

After the first vote, which sounded like a dead heat between the yes and no votes, he said, "In the opinion of the ... let me do that again."

The second vote sounded the same, and Villaraigosa looked offstage for help and advice.

A woman came up behind him and said, "Let them do what they're going to do."

On the third vote, Villaraigosa was prepared and stated that in his opinion, two-thirds of the voters said "aye," apparently without considering the volume of the voice vote.

Shaking fists and jeers erupted before he could finish speaking.

The platform of the party drew nationwide astonishment just a day earlier when it removed a reference to God and a declaration that Jerusalem is Israel's capital.