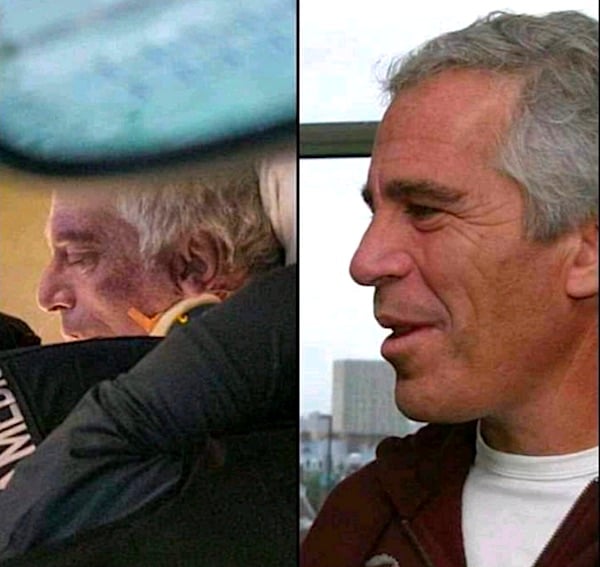 Is Jeffrey Epstein dead or alive?

That's the question swirling in the wake of the alleged death of accused sex trafficker Jeffrey Epstein, who was said to be found dead Saturday morning in his federal prison cell in New York.

As WND reported Sunday, the public has been told that Epstein was found dead, the victim of an "apparent suicide," and even though an autopsy has been performed, the New York City medical examiner's office still "needed more information before determining the cause of death," according to NBC News.

Limbaugh explained: "If Epstein was gonna commit suicide, he had to have assistance. And just coincidentally, there weren’t any cameras in there. Aw, damn it. Amazing how that happens. But, folks, there were cameras on the doors. There are cameras in the hallways. There are cameras on the doors. There ought to be video of anybody who went in and out of there in the immediate period before and after Epstein supposedly committed suicide. ...

"It just so happens the guards were overworked and understaffed, they were on overtime. I mean, it was a perfect storm of everything that could have gone wrong. I’m tending to think the guy’s not dead.

"I’m tending to think they got him out of there. He’s on a different island now that he bought before all this happened. They’ve somehow transferred some of his wealth so he has somewhere to live. I mean, if we’re gonna create conspiracy theories, let’s have at it. Let’s just have at it. We’ve gotten to the point in American society where nobody trusts anything that the government says, except the left. And everybody doubts this."

Helping to fuel the notion that Epstein is actually alive are photographs of Epstein's face before and after his death, being widely circulated on Twitter. 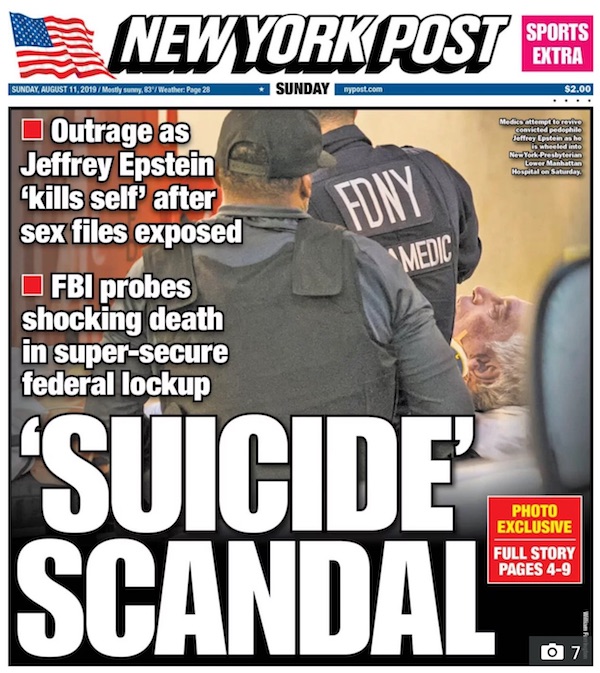 The body of a dead man purported to be Jeffrey Epstein being taken away from a federal prison in New York City on Saturday, Aug. 10, 2019 (New York Post cover on Sunday, Aug. 11, 2019)

The photograph of what is purportedly the corpse of Epstein that made the cover of the New York Post shows a different-shaped nose and ear between the live Epstein and the dead body.

"Each ear is unique and used in identification. If that is true I do not believe the man on the gurney is Jeffrey Epstein! Is Epstein in Witness Protection?" pic.twitter.com/i3w8CVIs6x 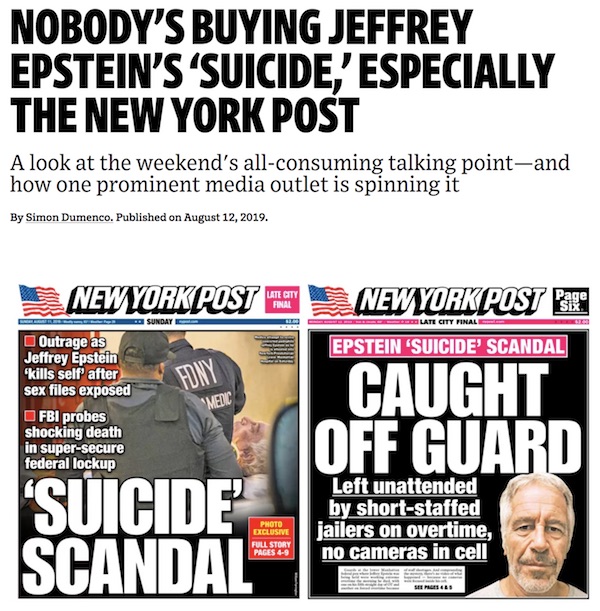 Some of the chatter online has turned comical.

With some suggesting Bill and/or Hillary Clinton may have been involved, conservative activist Ben Shapiro tweeted: "If you believe the Clintons crafted a genius plan to murder Epstein you’re going to have to explain why Hillary wasn’t even able to find Wisconsin on a map."

Author Ann Coulter said, "None of these moronic failures ever would have happened in a private prison," as she tweeted an image with the message "Suicide Watch," featuring one stick figure sitting in a chair eating popcorn while watching another stick figure being hanged.

Some Twitter users posted video of an Australian news broadcast called "The Project," which mysteriously had its satellite feed cut as it was interviewing an American analyst who was on the verge of giving his opinion about the real story of the Epstein mystery.

*Must Watch*
Australian TV show called 'The Project' were talking about the #Epstein "suicide". Suddenly the signal get cut, while the presenter of the show shocked just fool around. pic.twitter.com/QR8JJkJNJj

"Obviously, people are on to me," the anchorman jokingly said after his guest vanished.

Mark Young, the co-host of "BluntForceTruth" with former game-show host Chuck Woolery, tweeted an advertisement for a mattress-sale fundraiser for high-school girls, asking: "Really? Mattresses on the girls gym floor? Are we sure #Epstein is dead?"

Really? Mattresses on the girls gym floor? Are we sure #Epstein is dead? pic.twitter.com/J3egD8plIF

The Epstein case has already started memes online, including a Spider-Man theme:

I don't know if I believe all I hear about this #Epstein issue, I just know it makes for good memes. pic.twitter.com/tQXlokLKSr

And there was also a clip from the popular cartoon "Family Guy," with a female character summing up this mystery as an "I told you so" situation:

Epstein and Hollywood: *gets ousted as paedophiles thanks to #epstein *