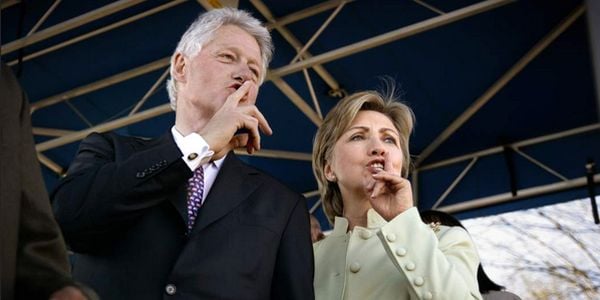 This weekend's mysterious death of wealthy financier Jeffrey Epstein at a federal prison in New York has ignited an online war of conspiracy theories, as President Trump retweeted messages suggesting former President Bill Clinton may somehow be involved, and Trump's own son blasted Twitter for suppressing the the trend of the "ClintonBodyCount," while prominently displaying "TrumpsBodyCount" as the top trending topic for discussion.

Epstein, who was facing numerous charges of sex trafficking involving underage girls, was found hanging dead in his jail cell about 6:30 a.m. Saturday, with the U.S. Justice Department saying it was the result of an "apparent suicide."

On Saturday afternoon, President Trump retweeted messages insinuating the Clintons may have had some sort of connection to Epstein's sudden death.

The president also retweeted a message from actor and comedian Terrence Williams, who said: "Died of SUICIDE on 24/7 SUICIDE WATCH ? Yeah right! How does that happen#JefferyEpstein had information on Bill Clinton & now he’s dead. I see #TrumpBodyCount trending but we know who did this! RT if you’re not Surprised#EpsteinSuicide #ClintonBodyCount #ClintonCrimeFamily."

Died of SUICIDE on 24/7 SUICIDE WATCH ? Yeah right! How does that happen#JefferyEpstein had information on Bill Clinton & now he’s dead

I see #TrumpBodyCount trending but we know who did this!

Williams posted video comments he recorded of himself, in which he states:

I'm not surprised. I told y'all last month this was gonna happen. ...

All the liberals were calling me a conspiracy theorist, saying "Terrence, you come out with crazy conspiracies, and you need to be banned from Twitter." And then guess what. The man really end up dead. And you know what? He had information on the Clintons, and the man ended up dead. Now for some odd reason ... people that have information on the Clintons end up dead, and they usually die from suicide. Come on, now!

I'm not gonna say who killed that man (Epstein) ... but the word around the street is the Clintons did it. I don't know, though. Hey, I'm just another black man on Twitter. I don't know nothing. ...

You die of suicide in prison? Yeah, OK. Somebody not doing their job, or somebody got paid not do their job. So somebody can get knocked off so information don't come out. But I don't know nothing. I'm just another black man on Twitter.

The Washington Post had reported, "A #ClintonBodyCount hashtag that trended anew on Twitter last month after Epstein was found injured and placed on suicide watch was revived Saturday, showing up in more than 90,000 tweets by the afternoon - often in conjunction with hashtags about Epstein's death."

Trump Jr.'s message was apparently prompted because the TrumpBodyCount hashtag had only about a tenth of the traffic of the ClintonBodyCount, and yet displayed as the top trender on many users' newsfeeds. 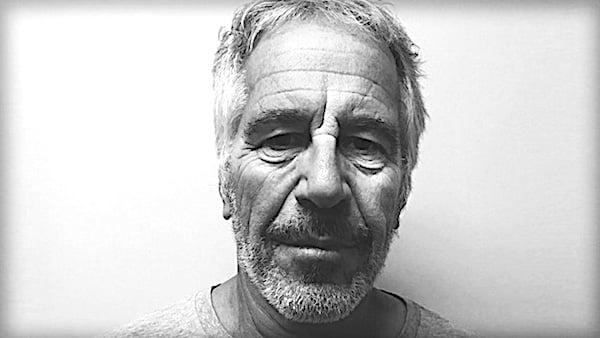 In August 2016, WND published a news story with the headline, "'Clinton death list': 33 spine-tingling cases," which documented the uncanny number of Bill and Hillary's "friends" who mysteriously fell off buildings, crashed in planes and died in freak accidents.

Author and conservative activist Dinesh D'Souza noted of Epstein's death: "And now the flight logs are all we have. How fortunate for these Democrats that their longtime donor and pimp Jeffrey Epstein is no longer around to rat them out."

And now the flight logs are all we have. How fortunate for these Democrats that their longtime donor and pimp Jeffrey Epstein is no longer around to rat them out https://t.co/kWLuUjcFYY

Even Democrats are questioning if Epstein's death was actually a suicide.

"I was not surprised for one minute," U.S. Rep. Lois Frankel, D-Fla., told NPR. "There are a lot of very powerful people who wanted to see this man dead. So was it really just a suicide? Was it just negligence by the officials who had custody of him? I don't know, but I definitely think it needs to be investigated."

Carol Leonning, a reporter for the Washington Post and a contributor on MSNBC, noted: "People close to Epstein fear he was murdered...as Epstein told authorities someone tried to kill him in a previous incident weeks earlier. He was described as being in good spirits in recent days."

People close to Epstein fear he was murdered...as Epstein told authorities someone tried to kill him in a previous incident weeks earlier. He was described as being in good spirits in recent days... https://t.co/J9QNSo1N2v

In late July, Epstein was found "sprawled on the floor" and "blue in the face" in his jail cell.

Officials were investigating if that incident were a suicide attempt or if the 66-year-old was victim of an assault.

Spencer Kuvin, the attorney for three of Epstein's sex-trafficking accusers, told the Sun Online the July incident may have been an organized "hit," and not a suicide try.

"I question whether or not it was a true suicide attempt that Mr Epstein was involved in in jail or whether or not there may be some powerful people who just don’t want him to talk," Kuvin said. "If he goes on trial, everyone he’s been in contact with will ultimately be fair game. There’s no doubt in my mind that no jail will protect you when there’s powerful people that want to reach you -- wherever you are.

"If he’s going to implicate anyone in power that has the ability to reach in and somehow get to him -- his life is definitely in jeopardy. I do question whether it was a true suicide attempt. I mean how do you choke yourself? It doesn't make any sense. There are reports someone came after him but that could just be because he's a pedophile. Those types of individuals don't last long in prison.

"If Epstein is in general population or anywhere available to the general population I believe his life is in jeopardy. They will have to seal him down in the jail. But even there there are still people who can get to him, ultimately."

Investigative journalist Laura Loomer reported: "There are reports from MSM (mainstream media) claiming that Epstein hung himself which are categorically FALSE. Epstein’s body was cold to touch which means he had been dead for at least 4 hours, and if he had hung himself, one of the TWO cameras in his cell would have alerted the officers monitoring them. The reports being pushed through MSM are contradictory to that which our exclusive sources and the EMS recording states.

"There would not have been a way for Epstein to commit suicide because while on suicide watch, one does not have clothes, bed sheets, or shoelaces. Inmates on suicide watch only have a smock and a hole in the ground for using the restroom."