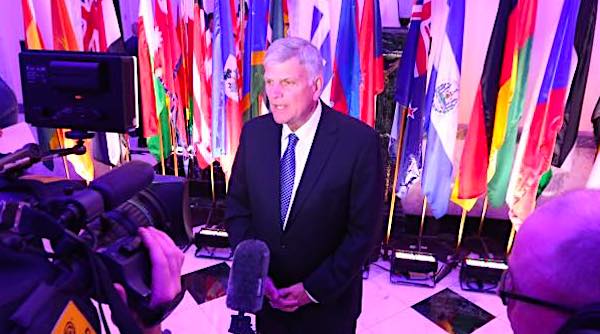 Evangelist Franklin Graham is warning Christian leaders who renounce their faith that they will have to answer to God.

"Shame on them," he said. "You'll stand before God one day and give an account to him."

Josh Harris, the "I Kissed Dating Goodbye" author, recently announced his is divorcing his wife and leaving his faith.

Graham, in a podcast interview with Todd Starnes, said they're "in a very dangerous place to be out from under God's protection."

"For whatever reason they have decided they're going to turn their back on God and God's standards," he told Starnes.

Graham said he especially was concerned that they felt obligated to make their doubts public.

"[God] warns churches that turn their back on him and these young men who have renounced their faith have made it so public. Why did they make it so public? I think they just wanted publicity. Otherwise, why didn't they just leave their faith and just be quiet about it?"

Graham, for one, won't be following them, if that was their underlying motive.

Starnes commented, "And we should also pray for Mr. Harris and Mr. Sampson – that they, too, may one day become followers of Jesus Christ."

Relevant Magazine reportedSampson posted a now-deleted Instagram statement: "I'm genuinely losing my faith, and it doesn't bother me. Like, what bothers me now is nothing. I am so happy now, so at peace with the world. It's crazy."

Sampson said he hadn't "renounced" faith but it was on "shaky ground."

Harris posted a message on social media stating he no longer was Christian and was divorcing his wife.

The statements from Harris and Sampson prompted John Cooper of the rock band Skillet to write on Facebook, "What in God's Name Is Happening to Christianity?"

"We must STOP making worship leaders and thought leaders or influencers or cool people or 'relevant' people the most influential people in Christendom," he wrote. "Most shocking imo, as these influencers disavow their faith, they always end their statements with their 'new insight/new truth' that is basically a regurgitation of Jesus's words?! It's truly bizarre and ironic. They'll say 'I'm disavowing my faith but remember, love people, be generous, forgive others.' Ummm, why?"

Sampson responded, claiming people were jumping to conclusions about him.

"Wow. Where do I begin? What right have you to put words in my mouth? I wouldn’t presume to put words in yours. To think that I am trying to influence others, without even asking me if that is my intention is offensive. Did I write an article on myself in relevant magazine, or Christian Post quoting myself? Do I need this kind of criticism in an honest examination of what I believe from complete strangers? I have never even met you, yet you presume to know me or people like me? I only ever posted about this to explain to people (4K followers on insta I may add) where I was at in an honest and genuine way. Not to influence them and their beliefs. Not to draw attention to myself. Not to have a voice. To wrestle and to learn and to grow, and to present my current state of mind/heart to explain to people why I am not 'coming back to Hillsong' or 'when I’' going to sing on the next United song.'"