.@HillaryClinton, whom I have strongly supported for many years, told blatant lies about me today. As a result, I have been subjected to widespread condemnation by mainstream media. I'm going to fight this. Stay tuned tomorrow for my first-ever twitter storm. pic.twitter.com/CrPHMycVBu

When President Trump spotlighted a study concluding Google manipulated millions of votes in favor of Hillary Clinton in 2016, the former secretary of state responded, contending the study had been "debunked." 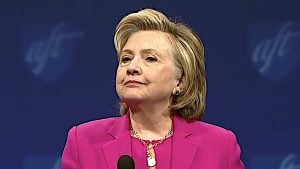 But the author of the study, Harvard-trained researcher Robert Epstein, is expressing disappointment in Clinton's "blatant lies."

Epstein, who pointed out he voted for Clinton in 2016, wrote via Twitter on Tuesday that "to my knowledge no credible authority has ever 'debunked' either my 2016 and 2018 election monitoring projects or my controlled studies on internet influence."

The exchange began with Trump tweeting on Monday that Google should be sued for interfering in the election.

“Wow, Report Just Out! Google manipulated from 2.6 million to 16 million votes for Hillary Clinton in 2016 Election! This was put out by a Clinton supporter, not a Trump Supporter! Google should be sued. My victory was even bigger than thought!” Trump said in a tweet.

WND reported last month Epstein told a Senate panel that Google's search results favored the Democratic candidate in 2016 and can do the same in 2020.

Trump was referring to a newly released report of Epstein's July 16 testimony to the Senate Judiciary Subcommittee on the Constitution concluding that biased search results can alter the opinion of millions.

Clinton responded to Trump on Twitter, saying "the debunked study you’re referring to was based on 21 undecided voters. For context that’s about half the number of people associated with your campaign who have been indicted."

Not so fast, Epstein said. Noting he's a "big" Hillary supporter, he pointed out his "2016 monitoring findings were based on an analysis of 13,207 election-related searches, along with the 98,044 web pages to which the search results linked."

A senior research psychologist at the American Institute for Behavioral Research, he made it clear at the hearing that he is "not a conservative."

"I am here today for three reasons: to explain why Google presents a serious threat to democracy and human autonomy, to explain how passive monitoring systems can protect us both now and in the future from companies like Google, and to tell you how Congress can immediately end Google’s worldwide monopoly on search," he said in his prepared testimony.

'You heard people saying it'

In an interview with WND in December, Epstein pointed to a video leaked in September 2018 that showed Google executives at their first weekly meeting after the election of Donald Trump in 2016 exhibiting panic and dismay while expressing their determination to thwart the new administration's agenda as well as the emerging global populist movement.

He estimated that the outcomes of about 25 percent of elections around the world are being determined by Google’s search algorithm.

Earlier this month, a senior software engineer at Google admitted in an interview with Project Veritas that "Big Tech" is not politically neutral and that his company manipulates search algorithms "to do what we want them to do."

Coppola began be expressing his respect for Sundar as a manager and noted that the Google Assistant on which he works, the counterpart to Apple's Siri, "really doesn't have a political bias."

However, regarding Google's algorithms, he said it's "ridiculous to say that there’s no bias."