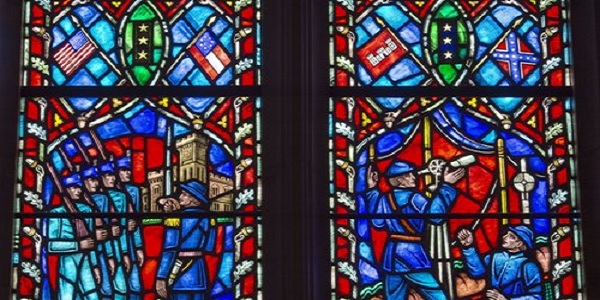 A national organization called JewsChooseTrump that explains its support for the Republican chief is because he pulled America out of the "disastrous Nuclear Iran Deal" and more, is asking the Internal Revenue Service to take a close look at National Cathedral's tax exemption.

It's because the premier Episcopal facility in Washington has posted on its website political statements lashing out at President Trump.

Under IRS regulations, tax exempt churches are not supposed to support, or oppose, political candidates, although there are unresolved claims that those comments fall under the First Amendment.

The organization announced on Wednesday it has filed a Form 13909 Referral with the IRS "seeking a determination that the National Cathedral has violated the regulations it is required to adhere to [in] order to maintain its tax-exempt status."

The problem is its "highly partisan political intervention in the current presidential political campaign."

The Episcopal church, in fact, recently posted online a diatribe against the president, titled, "Have We No Decency? A Response to President Trump."

It charges the president with "radicalized rhetoric."

"After two years of President Trump's words and actions, when will Americans have enough?" the church leaderes ask.

They liken Trump to Sen. Joseph McCarthy's condemnation during the 1950s of communists and communism in America.

That senator, the church explains, for a time "had free rein to say and do whatever he wished. With unbridled speech, he stoked the fears of an anxious nation with lies; destroyed the careers of countless Americans; and bullied into submissive silence anyone who dared criticize him," the church said.

They charge that "from the highest office in the land" have comment comments that constitute "a level of insult and abuse … that violates each person's sacred identity as a child of God."

"This week, President Trump crossed another threshold. Not only did he insult a leader in the fight for racial justice and equality for all persons; not only did he savage the nations from which immigrants to this country have; but now he has condemned the residents of an entire American city."

Church leaders said the president's words "are dangerous," give cover to "white supremacists" and they warn "violent words lead to violent actions."

They, as church leaders, say they must stand against "bigotry, hatred, intolerance, and xenophobia."

They advocate opposition such "words and actions."

The JewsChooseTrump organization explains its members support Trump because of the Iran deal pullout, his imposition of sanctions on Iran, his recognition of Jerusalem as Israel's capital, his moving the U.S. embassy from Tel Aviv to Jerusalem, the Taylor Force Act, his recognition of Israel's sovereignty over Golan Heights, and other actions.

"In issuing this statement, the cathedral has crossed the line that bars tax-exempt entities from engaging in partisan political activity. In response, JewsChooseTrump,org has filed a complaint with the Internal Revenue Service. We requested that the IRS investigate the cathedral’s outrageous action, and either withdraw the cathedral’s tax-protected status or impose some other appropriate remedy."

The complaint points to the IRS regulation prohibiting churches from engaging in political activity.

"The only action Americans can lawfully take against a president whom they believe to be as 'dangerous,' as the cathedral insists President Trump is, is either to vote against him or to impeach him. At the very least, the entire July 30 public statement on the website of the National Cathedral constitutes a 'message' that is clearly 'opposing a candidate.' In other words, the cathedral is intervening in a political campaign, as defined in the Internal Revenue Code," the organization said.

Marco Rubio: It's up to us to stop Communist China's anti-faith agenda

States are being banned from thinking differently