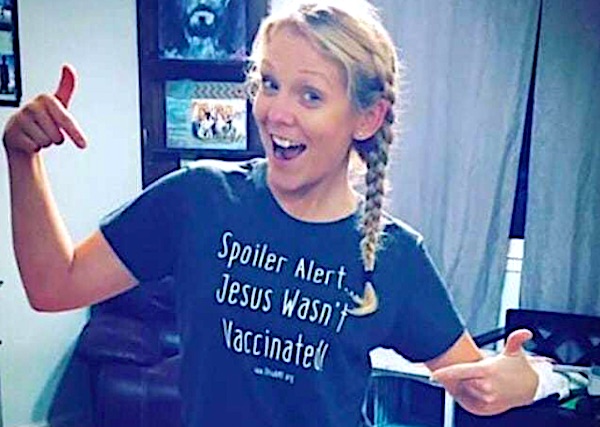 An online photo of a young woman sporting a T-shirt with a message about Jesus and vaccinations has ignited a holy war of sorts on Twitter.

The image was shared online by an account named "Christian Nightmares," which bills itself as "the best place on the Internet to find creepy Christian sh**."

The photograph and related comments caught the attention of Cameron LeBlanc at Fatherly, who noted: "The body language of the girl wearing the shirt, from the exaggerated smile to the finger guns aimed at the slogan, reinforces her supreme confidence in her opinions no matter how medically incorrect or intolerant they might be. In other words, she’s setting herself up to be completely and utterly roasted on the Internet."

In fact, most of the commenters on Twitter appear to support vaccinations, while at the same time voicing anti-Christian sentiments:

I don't know what's better, the original comment or this.... pic.twitter.com/LgkJJ6DLWi