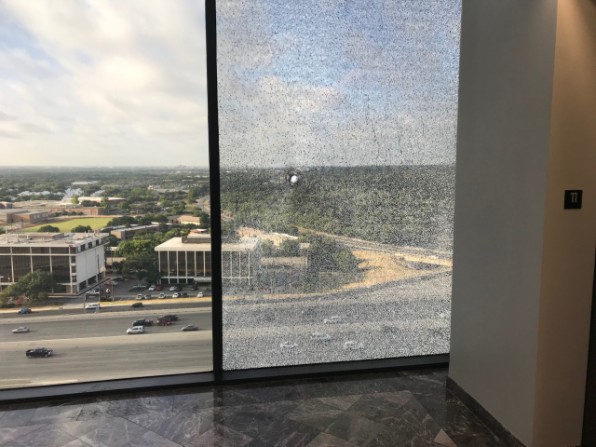 A gunman put a bullet through a window of the offices of ICE contractor GEO Group in San Antonio, Texas, Aug. 13, 2019 (Photo: GEO Group)

One day before a gunman fired shots into the offices of an ICE contractor in Texas, open-borders activists in Florida were caught on video threatening employees of the contractor, GEO Group, which provides facilities to detain illegal aliens.

Another protester shouted: "We know where you sleep at night. We know what kind of dog food you buy your dogs."

"We're not actually joking," the protester said before shouting the location of Bulfin's residence.

The threats came one day before a gunmen allegedly fired shots into local ICE offices and GEO Group offices in San Antonio, Texas.

The FBI is describing the shooting incident early Tuesday as a "targeted attack."

Decrying the "politically motivated attacks," he said the work his company is doing is the same as it provided during the Obama administration.

"We have been a services provider to the federal government for over 30 years," he said. "The fact is that the services we provide in our facilities today are in no way different than the high quality, professional services under the same standards that we provided for eight years under President Obama’s administration. So where was the outrage then?"

The activists also videotaped themselves beheading a doll of President Trump with a guillotine.