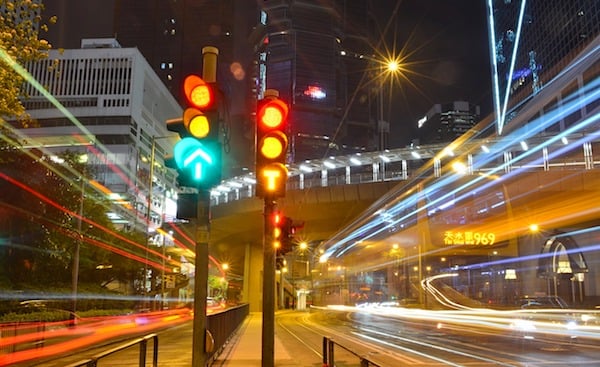 A major privacy advocate is asking California to suspend a training program for law-enforcement officers conducting "mass surveillance" of drivers, because it includes outdated and incorrect information, and acts as a sales promotion for the private company running the database.

The Electronic Frontier Foundation is asking Scott Loggins of the Commission on Peace Officer Standards and Training to suspend the certification for the training program for officers regarding automated license-plate readers, or ALPRs.

The cameras and character-recognition software, mounted on streetlights and overpasses and attached to police cars, monitors California drivers and compiles in databases their locations and movements.

The results are used to analyze drivers' travel patterns, identify people who visit particular locations, track vehicles in real time and even predict the movements of individuals.

However, EFF explains, there are major concerns regarding the factual accuracy of the training being offered to officers. And there is an apparent conflict of interest and threat to civil liberties because the training is provided by a company that also profits from the sale of the data.

EFF told state officials its letter "lays out how the POST training on ALPRs fails to conform with both statutory and case law governing ALPRs, uses training materials not certified by POST, and functions as an advertising platform for one private vendor. Because the potential damage to the public interest is so great, EFF formally requests that POST immediately suspend certification."

Part of the concern, EFF explains, is that "a single surveillance vendor" now has a monopoly on training law enforcement officers in its program.

"In California, Vigilant Solutions offers ALPR training through a program it calls the 'Vigilant Solutions Law Enforcement Academy,' which advertises training courses that come with free trial accounts for the company's ALPR and face recognition platforms. Vigilant has garnered controversy due to its data-sharing contracts with ICE and its business model, which includes selling data collected with its own ALPR cameras to the private sector in addition to law enforcement. The company also has a history of requiring government agencies to sign agreements prohibiting them from talking publicly without the company's sign-off in an effort to control media messaging," EFF said.

EFF investigated the training, using the California Public Records Act, and came away with "several concerns."

"Most notably, the training presentation instructs police that there are no laws in California regulating the use of ALPR. While that may have been true in 2014, it has not been the case for nearly four years. In 2015, California passed a law, S.B. 34, regulating the use of ALPR systems and data collected by ALPR. These regulations include developing policies that protect civil liberties and privacy, as well as a long list of requirements related to cybersecurity and transparency," EFF explained.

The training also fails to address the California Values Act, a law passed in 2017.

Vigiliant told EFF it may have "updated" some facets of its training, "but if so, that version was not resubmitted for certification, as required by POST regulations, according to records obtained by EFF."

One of the biggest issues is that Vigilant "uses the ALPR training as a platform to sell its products. The training materials are filled with promotion, such as a pitch for its ALPR databases consisting of law enforcement and commercial data, and its mobile software that comes with face recognition capabilities. By having a monopoly on ALPR trainings, Vigilant is able to promote its products and its version of the law surrounding ALPR at the expense of protecting civil liberties and privacy," EFF said.

The privacy group noted the state's legislature already has ordered the state auditor to investigate the use of automated license plate readers, to include a review of which agencies use the technology and what vendors are involved.

The letter, signed by EFF's Senior Investigative Researcher Dave Maass and staff attorney Saira Hussain, concluded: "ALPRs are a controversial technology that the state legislature has recognized may negatively impact civil liberties, privacy, and data security for Californians. This technology collects data indiscriminately on every driver, regardless of whether they have been connected to crime. In order to ensure that law enforcement is receiving adequate instruction, all trainings must be scrutinized, open to examination, and performed by experts without a commercial incentive to sell the underlying products," EFF said.