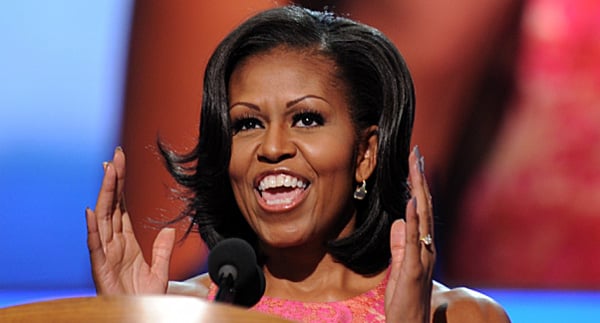 The rest of the country? Eh, not so sure.

Nah, I don’t care for this group either. Hoping tomorrow’s will be better.

"Nah, I don't care for this group either. Hoping tomorrow's will be better," he said, with the obvious irony being that there is no "tomorrow's" group.

So what to do?

Filmmaker and activist Michael Moore thinks Democrats should place their hope in former first lady Michelle Obama, who hasn't indicated she has any intention of running.

He said that while certain other candidates could "beat" Trump, perhaps by 5 million votes, they still would lose in the Electoral College, just as Hillary Clinton did in 2016.

"If the election were held today, there is one person who could crush Trump," Moore said in an MSNBC interview. "And she hasn't announced yet. And her name rhymes with Obama."

He called Michelle Obama "a beloved American" who is "so powerful and so good."

CNBC reported YouGov just weeks ago named her the most admired women in the world.

Top talk-radio host Rush Limbaugh earlier this week said a Michelle Obama run for the Oval Office shouldn't be ruled out, because the Obamas believe they still have "a lot of scores to settle."

"A lot of people, when I say this, 'Rush, there's no way. She's not gonna give up the life she's got. Nobody would. She's rich. She's famous. She'd have to work when she doesn't want to work. She can go wherever she wants to go, she's treated like royally.'"

Limbaugh acknowledged that argument is legitimate but said it's Barack Obama "who wants back in."

Nevertheless, he warned against discounting the idea that Michelle Obama "has got her own passionate and radical ideas."

"I think the Obamas collectively think they've got a lot of scores to settle," he said. "That 2016 Trump victory was taken as a personal humiliating, resounding rejection. Obama's out there, he campaigned more for Hillary than she campaigned for herself."

Limbaugh said the main reason Barack Obama hasn't endorsed anyone is that his wife may jump into the race.

"But one of the big reasons in Obama’s case is that — do not doubt me on this — there is every possibility, I wouldn’t know what percentage to attach to it, a number like 75 percent, 80, I don’t know, but there’s a decent percentage chance that she gets in this. But not in the middle of this fray," he said.

Michelle Obama routinely gets treated like royalty by establishment media. She gave British royal Meghan Markle "lessons on motherhood," many outlets have gushed. And she and Barack "shared touching birthday tributes" to her mother.

On her book tour she talked about "diversity."

The Los Angeles Times reported more than 700 people have filed to run for president.

They include "Vermin Supreme," who wants to give everyone a pony, 89-year-old former Alaska senator Mike Gravel and Seven the Dog.

Among the candidates are 279 Democrats, 107 Republicans, 34 Libertarians, 156 independents and many with other party affiliations, such as the Independent Conservative Democratic Party.

"The majority are running long-shot campaigns most voters will never hear about. Some acknowledge they have little hope of gaining traction. Other candidates think, just maybe, there’s a shot that their message might catch on," the Times said.

He said "white supremacy" is embedded in the nation's foundations, so "we don't know how to solve the problems."

The Times reported Crystal Bergfield quit a job in the parks department in Westminster, Colorado, to get up every morning and meditate on being president.