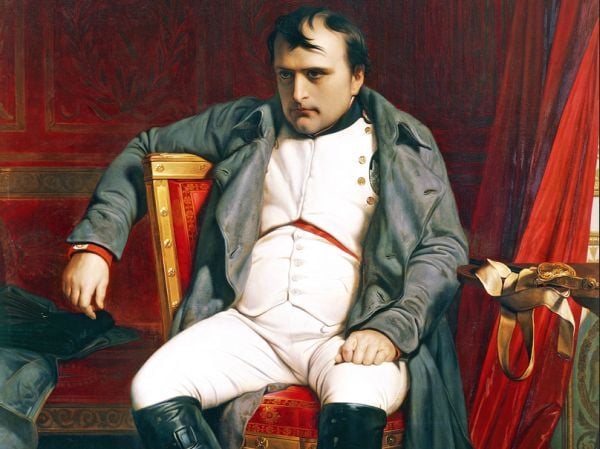 Napoleon was born Aug. 15, 1769. After his education, he was commissioned in the French military in 1785, and quickly advanced. Napoleon's expertise in the use of mobile artillery and the military tactic of "envelopment" resulted in him becoming one of the greatest military commanders of all time.

Beginning in 1792, France experienced a Reign of Terror. King Louis XVI and Queen Marie Antoinette were beheaded in 1793.

When the French Revolution began, Napoleon was an artillery officer. In April of 1795, Napoleon was ordered to help smash a counter-revolution of Catholic royalists in War in the Vendée. Napoleon claimed to be in poor health and so did not participate in the butchery of an estimated 300,000.

France had an alliance with the Muslim Turkish Ottoman Empire, begun in 1536 between King Francis I and Sultan Suleiman the Magnificent. The treaty was considered a blasphemous scandal by the rest of Christian Europe, nevertheless, it continued for most of two-and-a-half centuries.

In early fall of 1795, Napoleon was ordered to go to the Ottoman capital in Constantinople, to upgrade the military with his artillery expertise. Napoleon refused. One wonders how different history would have been had Napoleon's artillery expertise been in the service of the Turkish Sultan.

In Paris, a crowd of royalist counter-revolutionaries gathered in the streets. On Oct. 5, 1795, Napoleon ordered cannons to be fired at them. Fourteen hundred royalists died and the rest fled. He reportedly commented that he had cleared the streets with "a whiff of grapeshot." The new French government, called the Directory, quickly promoted Napoleon.

Meanwhile, at the same time the French Revolution began, a slave revolt erupted on the French island of Haiti (Saint-Domingue).

Haiti was considered the richest colony in the world, being one of the main suppliers of sugar globally. The loss of the colony Haiti created a need for France to replace it with another tropical colony, in order to compete with Britain's India. This led to French General Napoleon Bonaparte invading Egypt on July 1, 1798. Napoleon quickly defeated the Egyptian Mamluk slave cavalry in just a few weeks.

A legend circulated that Napoleon's soldiers used the Great Sphinx for artillery practice, blowing off its nose, but sketches from 1737 showed that the nose had already been missing. One account is that a fundamentalist Muslim named Muhammad Sa'im al-Dahr considered the Sphinx a pagan idol and defaced it in 1378 A.D.

Napoleon attempted to introduce French concepts of liberté, égalité, fraternité (liberty, equality, democracy) but was unsuccessful as there were no words in the Arabic language to convey such concepts. The people there had been accustomed to rule by the sword for centuries.

On Aug. 1-3, 1798, Britain's Admiral Horatio Nelson defeated Napoleon's navy at the Battle of the Nile, leaving Napoleon trapped in Egypt. This put him in the position of having to appease the Muslim population.

While in Egypt, Napoleon uncovered Pyramid treasures. In 1799, Napoleon's French archeologists discovered the Rosetta Stone, a decree by Egyptian King Ptolemy V carved in stone in 196 B.C., written in Egyptian hieroglyphic script, Demotic script and Ancient Greek. The Rosetta Stone proved to be the key to deciphering Egyptian hieroglyphs, and thereby unlocking for scholars the thousands of years of ancient history of Egypt's Pharaohs.

Without the aid of his navy, Napoleon marched his army unsupported into Palestine where he almost captured Acre in the Holy Land.

The French newspaper, Le Moniteur Universel, published in "year seven" of the French Republic, May 22, 1799: "Bonaparte has published a proclamation in which he invites all the Jews of Asia and Africa to gather under his flag in order to re-establish the ancient Jerusalem. He has already given arms to a great number, and their battalions threaten Aleppo."

Napoleon abandoned Egypt and Palestine and returned to France, where he arranged a coup to become First Consul of the Republic, then emperor. Napoleon conquered across Europe, including the countries of Italy, Austria, Poland, German States, Holland, Denmark and Norway.

The map of European borders was redrawn. From 1807 to 1812, Napoleon ruled over the largest European empire since Roman times.

Napoleon spread the French "metric system" where all measurements were divisible by 10 – 10 being considered the number of man, with 10 fingers and 10 toes.

He instituted a civil-legal system called the Napoleonic Code, which emancipated Catholics in Protestant countries and Protestants in Catholic countries. Napoleon also emancipated Jews. Prior to this, throughout the centuries of Medieval Europe, Jews were restricted to live only in their neighborhoods, called ghettos. Under Napoleon, Jews had the freedom to live where they liked. Some, though, considered this as the beginning of a trend which diminished the strong, rabbi-led, synagogue-centered Jewish community.

In 1816, Napoleon commented to physician Barry O'Meara regarding emancipating the Jews: "I wanted to make them ... like other men ... by putting them upon an equality, with Catholics, Protestants, and others ... I had restored them to all their privileges. ... They were not permitted to practice usury ... but to treat us as if we were of the tribe of Judah. Besides, I should have drawn great wealth to France as the Jews are very numerous, and would have flocked to a country where they enjoyed such superior privities. Moreover, I wanted to establish an universal liberty of conscience."

It had a profound influence on the post-monarchy nations of Europe and various colonies around the world, such as Louisiana, as well as emerging countries, including the Middle East.

The Napoleonic Code was "statutory law," top-down, based on government decisions, decrees and statues, administratively enforced in a rigid and inflexible way, with the underlying intent being to maintain order in society, with citizens obeying the will of those in power.

This is contrasted with English Common Law traditions, where law is more bottom-up, an expression of the will of the people, developed over time, with judges taking into consideration precedents and conditions as they seek to maintain the underlying principle of protecting an individual's property and God-given rights.

The Napoleonic Code is completely secular. There is no concept of an individual being endowed by their Creator with inalienable rights.

In the Napoleonic Code, when a person was accused of a crime, he was de facto presumed to be guilty until proven innocent, whereas in English Common Law, courts assume the accused person is innocent until proven guilty.

In 1803, Napoleon was badly needing money for his army. He also feared Haiti's costly slave rebellion would spread to the French Louisiana Territory. Napoleon decided to sell nearly a million square miles to the United States during the administration of Thomas Jefferson, for around $15 million dollars. This is known as the Louisiana Purchase.

Napoleon combined the French and Spanish navies and, in 1805, attempted to invade England. He was defeated at the Battle of Trafalgar by British Admiral Horatio Nelson.

In 1807, Napoleon hired Muslim Mamluk cavalry to invade and subdue Spain. This led to a long, expensive and draining Pennisular War.

Napoleon, who had been excommunicated by the Pope, put his brother Joseph Bonaparte on the throne of Spain in 1808. This resulted in the Catholic leaders in New Spain, most notably Simon Bolivar, to declare independence.

Mexico independence from Spain began in 1810, as did Gran Columbia, which then divided up into the Latin and South American countries of Venezuela, Colombia (which included Panama), Ecuador, Peru and Bolivia, northern Peru, western Guyana, northwest Brazil.

Napoleon invaded Russia in June of 1812 with 400,000 men. Six months later, after the Battle of Berezina, he retreated back to Europe with only 40,000. The loss of French troops and his defeat at Leipzig led to Napoleon's abdication and exile on the Island of Elba in 1813. After a year, he escaped and again took control of France for another 100 days, but lost the Battle of Waterloo, June 18, 1815.

Nathan Rothschild helped fund the Duke of Wellington's British armies against Napoleon in Spain and France. A legend persists that Nathan Rothschild obtained early information of the British victory over Napoleon at the Battle of Waterloo, June 18, 1815. He began to sell his shares on the London Stock Exchange, leading investors to suspect he had inside information that the British lost the battle, resulting in panic-selling off of stocks.

The legend continued that Rothschild bought up devalued shares at low prices, and when news arrived the next day that the British had actually won the Battle of Waterloo, the stock market enthusiastically exploded, resulting in Rothschild making a million pounds sterling.

During the 17 years of Napoleonic Wars, an estimated 6 million Europeans died. In October 1815, Napoleon was banished to the South Atlantic Island of Saint Helena, where he died in 1821 at the age of 51.

Reflecting on his life, Napoleon dictated his "Mémoires" to General de Montholon, Baron Gourgaud and General Bertrand. His conversations were recorded by Emmanuel de Las Cases in Memorial de Sainte Hélène (published 1823). Napoleon had complained to Montholon of not having a chaplain, resulting in Pope Pius VII petitioning England to allow Abbé Vignali to be sent. Napoleon read out loud the Old Testament, the Gospels and the Acts of the Apostles.

Affirming his belief in God, Napoleon told Montholon: "I know men; and I tell you that Jesus Christ is not a man. ... Superficial minds see a resemblance between Christ and the founders of empires, and the gods of other religions. That resemblance does not exist. There is between Christianity and whatever other religions the distance of infinity. ... His religion is a revelation from an intelligence which certainly is not that of man. ..."