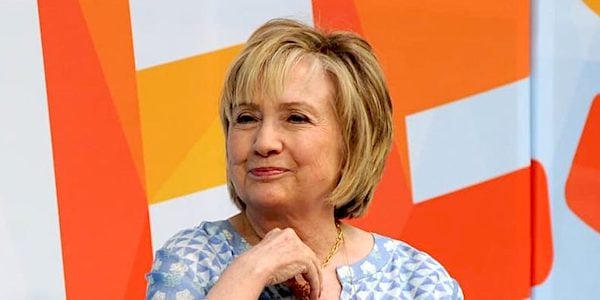 The fear that China hacked Hillary Clinton's emails on an unsecure server while she was in Barack Obama's Cabinet isn't new.

One year ago, talk-radio host Rush Limbaugh wondered why Clinton and Obama had not denied "the news story that the Chinese government had real-time hacked access to Hillary Clinton’s computer, her home-brew server and network when she was secretary of state."

The private email server through which Clinton transmitted classified information as secretary of state was hacked by a Chinese-owned company, according to sources briefed on the matter who spoke to the Daily Caller News Foundation.

On Thursday, more such claims appeared.

It was Ivan Pentchoukov, the digital editor for the Epoch Times, who posted on Twitter: "News: The metadata in Hillary Clinton's emails contained a Gmail address with the name of a Chinese company: '[email protected]' according to documents released by a Senate committee yesterday."

NEWS: The metadata in Hillary Clinton's emails contained a Gmail address with the name of a Chinese company: "[email protected]" according to documents released by a Senate committee yesterday.

Jeannette McMillian, an attorney for the intelligence community inspector general (ICIG), told Congress that this email with the name of a Chinese company appeared to serve as a "live dropbox" for all of Clinton's emails. pic.twitter.com/U6ftETvFoh

Jeannette McMillian, an attorney for the intelligence community inspector general, told Congress that the email with the name of a Chinese company appeared to serve as a "live dropbox" for all of Clinton's emails.

Pentchoukov added, "McMillian told Congress that the Carter Heavy Industries email address in the Clinton-email metadata was set up to receive a copy of every email sent and received as they were sent, even if the intended addressee was different."

The prospect that an enemy nation was daily reading classified information sent from and to the secretary of state escalates the scandal to a new level. The FBI investigated the matter but declined to refer charges, even though it found she was "extremely careless" in her handling of classified information.

The Daily Caller previously reported, citing two sources familiar with the matter, that the foreign power was a Chinese government-owned company with operations in Washington.

The Chinese embedded code in the server that generated a "courtesy copy" of every Clinton email and forwarded it, the sources said at the time.

Judicial Watch filed its lawsuit after the Office of the Director of National Intelligence didn't respond adequately to a FOIA request submitted last summer.

"Our lawsuit could further expose how anti-Trump activists like disgraced FBI official Peter Strzok bent over backwards to protect Hillary Clinton from having to answer for her national security crimes," stated Judicial Watch President Tom Fitton.

"The scandal of the illicit Trump spying is directly tied to the Deep State protection of Hillary Clinton."

The meeting between IG officials and Strzok was brought up by Rep. Louis Gohmert, R-Texas, during Strzok's testimony before a House committee last year.

The Texas Republican explained the ICIG found an "anomaly on Hillary Clinton's emails going through their private server, and when they had done the forensic analysis, they found that her emails, every single one except four, over 30,000, were going to an address that was not on the distribution list."

"It was a compartmentalized bit of information that was sending it to an unauthorized source," the congressman said.

Strzok acknowledged the meeting but claimed he didn't remember being told about the major security breach.

Gohmert told the FBI agent: "Let me refresh your memory. The Intelligence Community Inspector General Chuck McCullough sent his investigator Frank Rucker along with an IGIC attorney Janette McMillan to brief you and Dean Chapelle and two other FBI personnel who I won't name at this time, about an anomaly they had found on Hillary Clinton's emails that were going to the private unauthorized server that you were supposed to be investigating?"

Strzok, who later was removed from special counsel Robert Mueller's investigative team for anti-Trump bias and eventually fired, also was revealed, along with FBI attorney Lisa Page, to have used "unsecure devices in discussion how the U.S. could improve the sharing of sensitive data with the European Union."