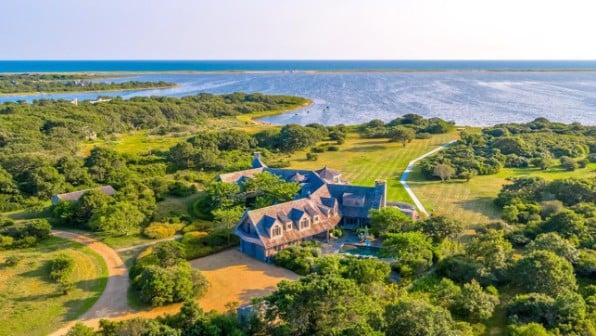 Barack and Michelle Obama are said to be in the process of purchasing this Martha's Vineyard mansion (Realtor.com)

The news that Barack and Michelle Obama are in the process of buying a nearly $15 million, waterfront estate on Martha's Vineyard has talk-radio host Rush Limbaugh wondering what the are thinking.

He thinks he knows the answer.

"Maybe because they know that this whole climate change thing is nothing but a gigantic left-wing agenda-driven hoax!" he said.

While Democratic voters may believe human-caused carbon emissions are threatening life on the planet, their leaders don't, Limbaugh insisted.

He recalled Obama in 2008 saying that his presidency would mark the beginning of the sea levels lowering and the planet healing.

"Obama doesn’t really believe this crap. If he did, they wouldn’t be buying a $15 million home that’s gonna be overrun by the ocean in years," he said.

The Obamas, Limbaugh said, "don’t any more believe that the sea levels are gonna rise to swallow up Martha’s Vineyard than I do."

"And this proves it."

TMZ reported the Obamas are in contract to purchase the 29-acre beachfront plot with a 6,892-square-foot main house.

The New York Post noted that in 2017, the Obamas spent $8.1 million on a nine-bedroom house in Washington, D.C.

As of 2018, Barack Obama's net worth was about $40 million, from projects such as speaking engagements and books along with his six-figure presidential pension,  according to a GoBankingRates calculation.

But Michelle Obama’s bestselling book "Becoming" and the couple's production deal with Netflix has boosted their worth to more than $135 million, the Post said.