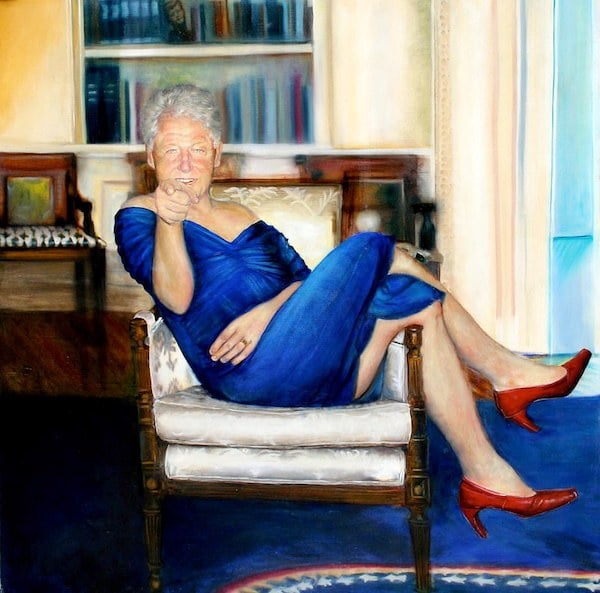 The story of President Bill Clinton and the blue dress is old political fodder by now.

The stain on the dress worn by White House intern Monica Lewinsky proved their sexual relationship.

But now there's a twist.

DailyMailTV cites an anonymous source saying convicted sex offender Jeffrey Epstein -- a friend of Clinton who was found dead in prison last weekend -- had a painting of Bill Clinton "wearing a blue dress and red heels and lounging in the Oval Office."

"The picture depicting the former president apparently lounging on a chair in the Oval Office, wearing red heels and posing suggestively in a blue dress redolent of Monica Lewinsky was in a room off the stairway of the Upper East Side townhouse," the report said.

The picture is known because the source for DailyMailTV secretly snapped a photo of the image while visiting Epstein's home for a business deal proposal.

"The woman said she was shocked to catch sight of the portrait through an open door as she walked through the ornate home with her business partner," the report said.

"It was absolutely Bill Clinton. It was shocking – it was definitely a painting of him. It was a very provocative, sexual picture. He was wearing heels, a blue dress and his hand was in a weird position," the source said.

The report said the image showed Clinton in a dress, which was off of one shoulder, legs crossed in a chair and the presidential seal on the carpet in front.

"The color of the dress seemed to be a pointed reference to Clinton's former intern Monica Lewinsky who a blue dress during their infamous sexual encounter in the White House," the report said.

Epstein, whose estate now is facing lawsuits from women allegedly assaulted as minors by Epstein or his friends, was once friends with Clinton.

And, the report said, "One of Epstein's former sex slaves, Virginia Roberts, claimed she saw Clinton on the island for a dinner held in his honor shortly after he left office, and stood by the claim when questioned under oath."

The connections between the Clinton family and Epstein run deep, as Epstein's alleged procurer, Ghislaine Maxwell, was a guest at Chelsea Clinton's wedding.

DailyMailTV said the metadata of the image it viewed confirms where and when the picture was taken.

The source who provided the information to DailyMailTV said she wondered at the time she saw it, "Why in the world would Epstein have that up?"

The source, who insisted on anonymity, told DailyMailTV that during the "business" meeting, Epstein wore pajamas, a white T-shirt and was "very grey and he looked creepy."

"I immediately knew we didn't want to do business with him, despite wanting the contract," she said.

In an analysis of the photo of the painting, DailyMailTV suggested the image appears to be Clinton in a blue dress. And it points out the presidential seal on the floor. The original shows the painting through an open doorway. 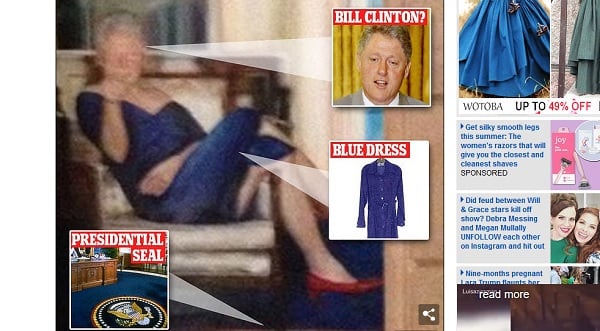