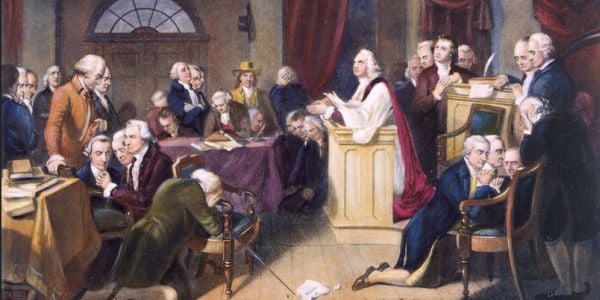 "It was enough to melt a heart of stone," remarked John Adams after the first prayer in Congress.

The first session of the First Continental Congress opened in September of 1774 with a prayer in Carpenter's Hall, Philadelphia.

America was being threatened by the most powerful monarch in the world, Britain's King George III. On Sept. 7, 1774, as the Congress began, the founding fathers listened to Rev. Jacob Duché read Psalm 35, which was the "Psalter" for the day according to the Anglican Book of Common Prayer: "Plead my cause, Oh, Lord, with them that strive with me, fight against them that fight against me. Take hold of buckler and shield, and rise up for my help. Draw also the spear and the battle-axe to meet those who pursue me; Say to my soul, 'I am your salvation.' Let those be ashamed and dishonored who seek my life; Let those be turned back and humiliated who devise evil against me."

That same day, Sept. 7, 1774, John Adams wrote to his wife, Abigail, describing the prayer: "When the Congress met, Mr. Cushing made a motion that it should be opened with prayer. It was opposed by Mr. Jay of New York, and Mr. Rutledge of South Carolina because we were so divided in religious sentiments, some Episcopalians, some Quakers, some Anabaptists, some Presbyterians, and some Congregationalists, that we could not join in the same act of worship. ..."

John Adams continued: "Mr. Samuel Adams arose and said that he was no bigot, and could hear a Prayer from any gentleman of Piety and virtue, who was at the same time a friend to his Country. He was a stranger in Philadelphia, but had heard that Mr. Duché deserved that character and therefore he moved that Mr. Duché, an Episcopal clergyman might be desired to read Prayers to Congress tomorrow morning. The motion was seconded, and passed in the affirmative. Mr. Randolph, our president, vailed on Mr. Duché, and received for answer, that if his health would permit, he certainly would. ..."

Adams continued: "Accordingly, next morning Reverend Mr. Duché appeared with his clerk and in his pontificals, and read several prayers in the established form, and read the collect for the seventh day of September, which was the thirty-fifth Psalm. You must remember, this was the next morning after we heard the horrible rumor of the cannonade of Boston. I never saw a greater effect upon an audience. It seemed as if heaven had ordained that Psalm to be read on that morning. ... After this, Mr. Duché, unexpectedly to every body, struck out into an extemporary prayer, which filled the bosom of every man present. I must confess, I never heard a better prayer, or one so well pronounced. Episcopalian as he is, Dr. Cooper himself never prayed with such fervor, such ardor, such earnestness and pathos, and in language so elegant and sublime, for America, for the Congress, for the province of Massachusetts Bay, and especially the town of Boston. It has had an excellent effect upon everybody here. I must beg you to read that Psalm."

The Journals of Congress then recorded their appreciation to Rev. Mr. Duché: "Wednesday, September 7, 1774, 9 o'clock a.m. Agreeable to the resolve of yesterday, the meeting was opened with prayers by the Rev. Mr. Duché. Voted, That the thanks of Congress be given to Mr. Duché ... for performing divine Service, and for the excellent prayer, which he composed and delivered on the occasion."

In the Supreme Court case of Town of Greece, NY, v. Galloway et al, Justice Kennedy wrote in the decision, May 5, 2014: "Government may not mandate a civic religion that stifles any but the most generic reference to the sacred any more than it may prescribe a religious orthodoxy. ... The first prayer delivered to the Continental Congress by the Rev. Jacob Duché on Sept. 7, 1774, provides an example: '...All this we ask in the name and through the merits of Jesus Christ, Thy Son and our Saviour, Amen.' ... From the earliest days of the Nation, these invocations have been addressed to assemblies. ... Our tradition assumes that adult citizens ... can tolerate and perhaps appreciate a ceremonial prayer delivered by a person of a different faith."

The 8th Circuit Court of Appeals rejected the atheist plaintiffs' effort to get "In God We Trust" removed from U.S. currency: "We recognize that convenience may lead some Plaintiffs to carry cash, but nothing compels them to assert their trust in God. ... The core of the Plaintiffs’ argument is that they are continually confronted with 'what they feel is an offensive religious message.' But Galloway makes clear that 'offense ... does not equate to coercion.'"

Ten months after the first prayer in Congress, Rev. Jacob Duché exhorted Philadelphia's soldiers, July 7, 1775: "Considering myself under the twofold character of a minister of Jesus Christ, and a fellow-citizen ... involved in the same public calamity with yourselves ... addressing myself to you as freemen ... 'Stand fast, therefore, in the liberty, wherewith Christ hath made us free' (Galatians, ch. 5)."