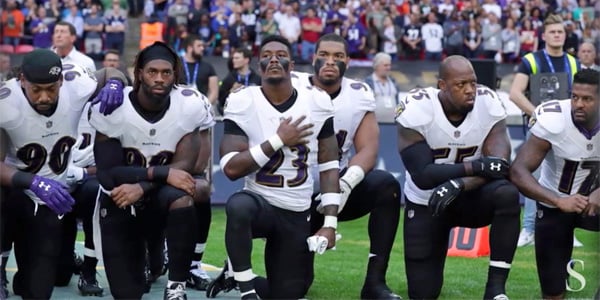 A new peer-reviewed study dispels the narrative promoted by the NFL anthem protests and the Democratic presidential candidates that America has a systemic problem of racist white cops seeking to kill young black men.

Published in the Proceedings of the National Academy, the study concludes that white officers are no more likely than black or Hispanic officers to shoot black civilians.

They found that if there is a determining factor in police shootings, it's the racial group's rate of violence, not the race of the officer.

"The more frequently officers encounter violent suspects from any given racial group, the greater the chance that members of that racial group will be shot by a police officer," noted Heather MacDonald, a fellow at the Manhattan Institute who has studied the issue and written about it.

"In fact, if there is a bias in police shootings after crime rates are taken into account, it is against white civilians, the study found," she wrote for National Review.

MacDonald pointed out 2020 hopeful Joe Biden's criminal-justice plan promises that black parents will no longer have to fear when their children walk the streets, presuming the threat comes from police officers and not gangs.

Other candidates have been more blunt.

On Friday, as WND reported, Sen. Elizabeth Warren, D-Mass., wrote on Twitter that Americans must "confront systemic racism and police violence head on." To illustrate her point, she falsely claimed that Ferguson, Missouri, teen Michael Brown had been murdered by a white police officer. President Obama's Justice Department found the officer acted in self-defense. Nevertheless, the incident sparked the Black Lives Matter movement and the meme "hands up, don't shoot" (which witnesses say didn't happen).

South Bend, Indiana, Mayor Pete Buttigieg has said police shootings of black men won't be solved "until we move policing out from the shadow of systemic racism."

Former congressman Beto O'Rourke claims police shoot blacks "solely based on the color of their skin."

'Impervious to the truth'

Previous studies also have dispelled the Democrats' claims, but MacDonald observed that the "Black Lives Matter narrative has been impervious to the truth."

"Police departments are under enormous political pressure to hire based on race, despite existing efforts to recruit minorities, on the theory that doing so will decrease police shootings of minorities," she wrote. "The Obama administration recommended in 2016 that police departments lower their entry standards to be able to qualify more minorities for recruitment."

Biden's plan would require police hiring to "mirror the racial diversity" of the community as a precondition of federal funding.

That's because the problem isn't white police officers, it's the crime rates in black communities.

MacDonald, the author of "The War on Cops: How the New Attack on Law and Order Makes Everyone Less Safe," wrote that the "policing is racist" discourse is poisonous.

"It exacerbates anti-cop tensions in minority communities and makes cops less willing to engage in the proactive policing that can save lives," she said.

"The anti-cop narrative deflects attention away from the real criminal-justice problem, which is high rates of black-on-black victimization," MacDonald wrote. "Blacks die of homicide at eight times the rate of non-Hispanic whites, overwhelmingly killed not by cops, not by whites, but by other blacks."

She urged Democratic candidates to "get their facts straight and address that issue."

"Until they do, their talk of racial justice will ring hollow."