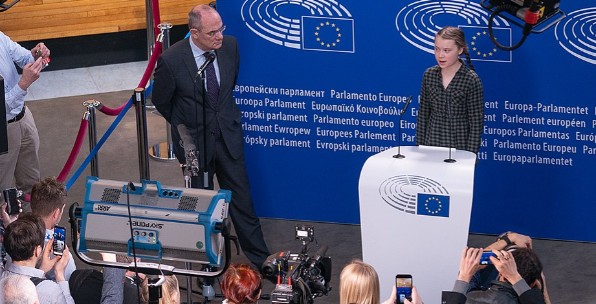 Greta Thunberg at the European Parliament in April 2019 (Wikimedia Commons)

Fresh from her transatlantic sailboat crossing, teen climate activist Greta Thunberg was joined by hundreds of American teenagers on Friday at a protest outside the United Nations headquarters in New York City.

They carried hand-drawn placards with messages such as "United behind the science" and "Act now or we will." And they chanted "System change, not climate change” and "Don't just watch us, join us," the Guardian of London reported. 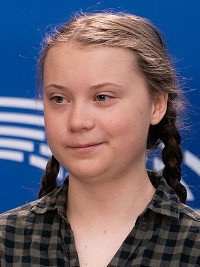 Thunberg held her trademark sign "skolstrejk för klimatet," which is Swedish for "school strike for climate." She drew global attention in August 2018 when she took time off school to demonstrate outside the Swedish parliament. Other students worldwide joined her in organizing a school climate strike movement under the name Fridays for Future.

The Guardian said she was seen Wednesday carrying the sign from the "zero emissions" racing yacht, which she said she took to the U.S. to avoid the polluting emissions of air travel. After a two-week voyage, she was escorted into New York harbor by 17 sailboats, one for each of the U.N.'s "sustainable development" goals.

While boasting of a carbon-free trans-Atlantic trip, it turns out her sailing team will fly back to Europe and another team will fly to the U.S. to take the boat back across the Atlantic. Reacting to criticism, Thunberg's team insisted the flights would be "offset" with carbon credits.

"It is insane that a 16-year-old would have to cross the Atlantic Ocean to make a stand," Thunberg said after arriving Wednesday. "The climate and ecological crisis is a global crisis, the biggest crisis that humanity has ever faced, and if we don’t manage to work together and to cooperate and to work together despite our differences, then we will fail."

She said fossil fuels should be kept in the ground and the world needs to "stop its war on nature."

Meanwhile, as WND reported Thursday, a new, improved system to assess surface temperatures established in 2005 by the National Oceanic and Atmospheric Administration, NOAA, indicates there has been no warming in the United States over the past 14 years. Further, raw temperature readings at preexisting stations indicate temperatures are the same now as 80 years ago.

'The world is literally melting'

Thunberg is scheduled to speak at next month's United Nations climate action summit.

She told the Guardian in an interview she wanted "a concrete plan, not just nice words" from leaders about taking urgent and comprehensive action to head off the climate crisis.

The Guardian spoke to an American teen activist at the protest Friday, Dana Henao, 16, of Brentwood, New York.

She said the government "isn't taking enough action to protect the environment and all they care about is the money they make with corporations polluting the planet and I think we should put a stop to it."

"The young people are the only ones taking action and we want to call attention to this."

Henao that Thunberg "is really popular and she's, like, the face of the movement."

Esme Ruiz, 8, from New York, attending with her father, also gave the Guardian her thoughts on the climate.

"The world is literally melting right in front of our eyes and no-one even realizes it," she said.

"We need to teach them. ... It's hard to make changes sometimes, but if you need to save the world, I'd do it rather than die."

Tony Heller of the website Real Climate Science, who has a broad career in science, education, environment and engineering, puts Thornburg's activism in perspective in a video: