"He has talked about white supremacists as fine people," says Democratic presidential candidate Elizabeth Warren. "He’s done everything he can to stir up racial conflict and hatred in this country."

Fellow presidential candidate Robert "Beto" O'Rourke agrees, saying Donald Trump himself is a white supremacist, which Merriam-Webster defines as "a person who believes that the white race is inherently superior to other races and that white people should have control over people of other races." Such an extreme claim about a president of the United States has no precedent in modern history.

Yet Sen. Bernie Sanders agrees Trump is a white supremacist, Sen. Kamala Harris describes the president as someone who "empowers white supremacists and who condones their behavior," and former Vice President Joe Biden insists Trump "has fanned the flames of white supremacy in this nation."

But it's not just Donald Trump that is irredeemably racist, say today's Democrats. America herself, according to virtually every Democratic presidential contender, as well as much of the elite media, is a deeply and malignantly racist nation.

Sen. Kirsten Gillibrand constantly denounces the twin evils of our age, "systemic racism" and "white privilege," while Mayor Pete Buttigieg warns, "Systemic racism is a white problem," going so far as to speculate darkly that white supremacy "could be the lurking issue that ends this country!"

Meanwhile, the New York Times, having disgraced itself by championing for over two years the debunked Trump-Russia collusion conspiracy theory, has moved on to what it calls its next great cause: documenting America's all-pervasive racism. To that end, the Times recently launched "The 1619 Project," which openly aims to entirely "reframe" American history – even changing the date of the nation's founding to 1619 – and claiming, in the Times' own words, that "nearly everything that has made America exceptional grew out of slavery." The Washington Post and much of the rest of the elite media are joining in on the "1619 Project," which historian and former House Speaker Newt Gingrich describes as "ugly revisionism" and "vile anti-Americanism."

In reality – as the August issue of Whistleblower magazine winningly documents – in no other nation on earth does skin color and ethnicity mean less than they do in America. The United States of America is by far the most diverse, multi-ethnic, open, free and opportunity-laden society in the world today, and in all of history.

The highly inspirational issue is titled, "THE LEAST RACIST NATION ON EARTH: Democrats' indictment of America as bigoted and oppressive couldn't be more wrong." 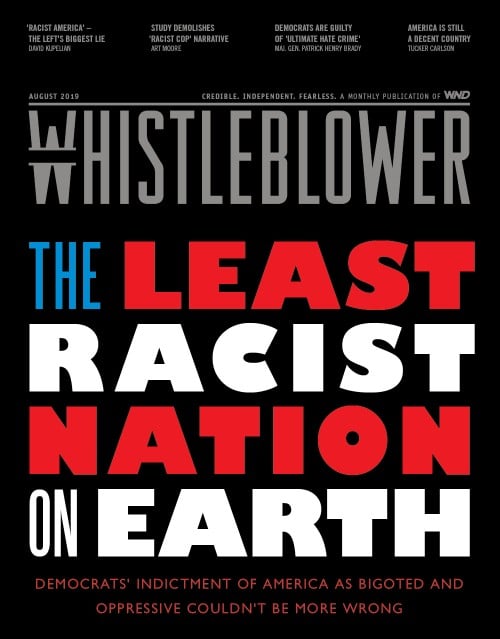 Highlights of "THE LEAST RACIST NATION ON EARTH include:

"Would-be immigrants and asylum seekers from around the globe risk their lives and fortunes to come to the United States more than any other country," says Whistleblower Editor David Kupelian. "Why would they do that, if America really is the oppressive racist hellhole today's Democrats and media cohorts insist it is?"

Commenting on the unique "American melting pot," Kupelian adds: "The American identity is rooted in something much higher and nobler than ethnicity, facial characteristics or skin color. It is rooted, rather, in shared Western Judeo-Christian moral, cultural, legal and societal values. Values like the Ten Commandments, limited government and maximum liberty, the Constitution, unalienable rights endowed by the Creator, equality under the law, free enterprise, equal opportunity (not equal results, which is socialism and ultimately tyranny) and love of country."

Nevertheless, as Whistleblower documents, the left is ever admonishing Americans that in 2019 the biggest problem supposedly holding back the nation's black population is the "legacy of slavery" – and not real-world issues like widespread family breakdown, fatherlessness and enslaving Democrat policies.

"This issue of Whistleblower," concludes Kupelian, "simultaneously annihilates the left's indictment of America as a racist pariah, and shows instead how and why it remains the most free, successful and color-blind nation on earth."

If you prefer, you may order a single copy of the August 2019 issue, "THE LEAST RACIST NATION ON EARTH." Or GET THE DIGITAL VERSION HERE!