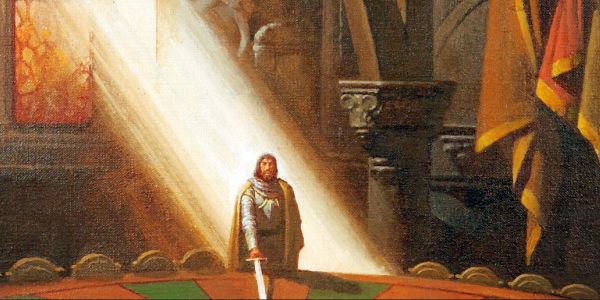 Camelot and King Arthur's Court, Knights of the Round Table, Guinevere, Sir Lancelot, Sir Galahad, and the search for the Holy Grail (the Holy Grail was Jesus' cup at the Last Supper) ... our imaginations soar with history and legend immortalized in "Idylls of the King," written 1859-85 by poet Alfred Lord Tennyson.

Alfred Lord Tennyson embellished the medieval legend of the Lady of the Lake who gave the sword Excalibur to the courageous young King Arthur. Scenes of this were portrayed in Disney's 1963 animated musical fantasy movie, "The Sword in the Stone."

Born Aug. 6, 1809, Alfred Lord Tennyson was the son of an Anglican clergyman. As a young poet, Tennyson came to the attention of poet Samuel Taylor Coleridge (1772-1834).

Alfred Lord Tennyson recorded the obedience and courage of the British Cavalry in the memorial poem "The Charge of the Light Brigade" during the Crimean War near the Black Sea. Due to a mistake, British soldiers were ordered to ride directly into the path of firing Russian cannons at the Battle of Balaclava, 1854:

'Forward, the Light Brigade!'
Was there a man dismay'd?
Not tho' the soldier knew
Someone had blunder'd:
Theirs not to make reply,
Theirs not to reason why,
Theirs but to do and die:
Into the valley of Death
Rode the six hundred.

Over a half-million died in the Crimean War which ended in 1856. When the British alliance eventually won, Russia feared British Canada may try to claim Russian Alaska.

As a result, Russia quickly negotiated with U.S. Secretary of State William H. Seward to sell the Russian Alaskan Territory to the United States in 1867, a total of 586,412 square miles for $7.2 million, about 2 cents per acre. It was the second-largest land purchase in history.

Rising to prominence during the Crimean War was an English woman who cared for wounded soldiers day and night – Florence Nightingale, "the lady with the lamp," who pioneered the modern nursing profession.

Alfred Lord Tennyson was honored by Queen Victoria as Poet-Laureate.

When Lazarus left his charnel-cave,
And home to Mary's house returned,
Was this demanded – if he yearned
To hear her weeping by his grave?

'Where wert thou, brother, those four days?'
There lives no record of reply,
Which, telling what it is to die,
Had surely added praise to praise.

From every house the neighbors met,
The streets were filled with joyful sound;
A solemn gladness even crowned
The purple brows of Olivet.

Behold a man raised up by Christ;
The rest remained unrevealed;
He told it not, or something sealed
The lips of that Evangelist.

The Library of Congress in Washington, D.C., has a line from Alfred Lord Tennyson's poem "In Memoriam" displayed in the Jefferson Building's Main Reading Room above the figure of History: "One God, one law, one element, and one far-off Divine event, to which the whole Creation moves."

Alfred Lord Tennyson was referred to by U.S. Supreme Court Justice David Josiah Brewer in his lecture "The Promise and Possibilities of the Future," 1905: "Some think ... that we are mere atoms of matter tossed to and fro. ... Speaker Reed once said...great events of history were brought about by an intelligent and infinite Being. ... If you will reflect a little you will be led to the conclusion that, as Tennyson writes 'Through the ages one increasing purpose runs.'"