Rep. Rashia Tlaib, D-Mich., poses in March 2019 with Nader Jalajel, a Palestinian activist who last year mourned the death of a terrorist who led a shooting attack that murdered a rabbi.

When she was photographed with a Hezbollah supporter in January, U.S. Rep. Rashida Tlaib, D-Mich., insisted she didn't know the man or what he stood for.

But only two months later, she did it again, reports the Investigative Project on Terror, posing with Palestinian activist Nader Jalajel.

Jalajel mourned the death of a terrorist who led a shooting attack that murdered a rabbi, writing, "May Allah have mercy on him."

The message was above an image of the terrorist, Ahmed Jarrar, brandishing a gun.

Jarrar died "after a long battle resisting the brutal Israeli occupation and defending his people and his land," the text on the image said. "We will never forget."

The photo with Tlaib was taken March 9 during a Palestinian American Women's Association banquet in Garden Grove, California.

The organization directed supporters to donate to help Palestinian terrorist Rasmieh Odeh get out of prison on bail in 2014 while she awaited sentencing for naturalization fraud.

Tlaib and fellow Muslim freshman congresswoman Ilhan Omar of Minnesota were in the news Thursday when Israel announced the two were banned from entering the country. They had planned a trip to "Palestine" this weekend, but Israel argued that they support the BDS boycott campaign, which critics contend ultimately seeks the elimination of the Jewish state.

Tlaib has compared the campaign to a boycott against Nazi Germany.

Her House colleagues, in a 398-17 vote last month, condemned the BDS movement for "encouraging the Palestinians to reject negotiations in favor of international pressure."

The resolution reasoned that BDS "does not recognize, and many of its supporters explicitly deny, the right of the Jewish people to national self-determination."

In April, ITP reported, Tlaib met with an American Muslims for Palestine delegation. Several of the group's leaders, including its chairman and its executive director, previously worked with a group called the Islamic Association for Palestine, or IAP.

A propaganda arm of a Muslim Brotherhood-run Hamas-support network in the United States, the group spun off the Council on American-Islamic Relations, or CAIR.

The two figures with whom Tlaib posed, Jalajel and Abbas Hamideh, both work with the anti-Israel group Al-Awda, the Palestine Right of Return Coalition. The group aims to change Israel demographically so it is no longer a Jewish-majority state.

In February, Al-Awda issued a statement defending Tlaib and Omar, including anti-Semitism accusations against Omar, contending they are solely due to "their support for Palestinian freedom." 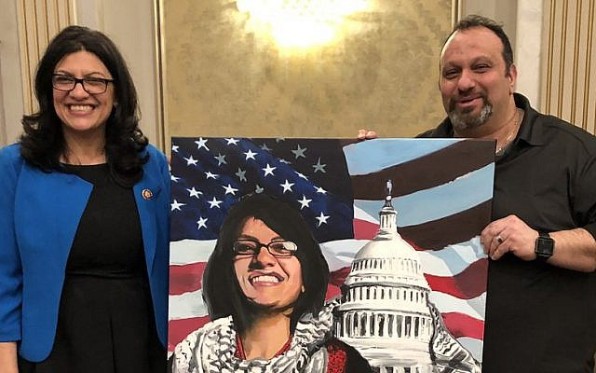 Tlaib claimed ignorance when her photo with Hezbollah-supporter Hamideh made news in January.

"It is also important to note," she told the Detroit Free Press, "a photo does not mean I agree with anything someone says. It is obvious this man thrives on media attention from his recent posts. It's unfortunate that he was successful. I do not agree with the statements brought to my attention."

Hamideh, however, saw the relationship differently, saying he attended Tlaib's swearing in ceremony and a "private dinner afterward."

"I know her well through her campaign and stuff like that—like we've met numerous times [at] numerous events," Hamideh told the Daily Caller.

The two, in fact, had been photographed together in April 2018 during Tlaib's campaign for Congress

Hamideh posted that photo again in August 2018, after Tlaib won her primary, writing, "Congratulations to my dear friend Rashida Tlaib."

Hamideh has called Hezbollah leader Hassan Nasrallah "the most honorable Arab-Muslim leader of our lifetime."

During Nasrallah's tenure, Hezbollah has been designated a terrorist organization by the United States and other nations, as well as by the European Union.