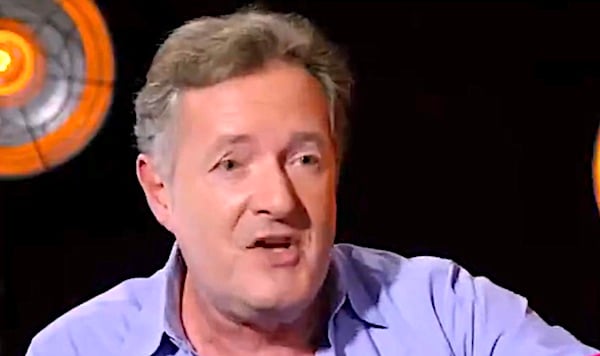 A self-proclaimed "liberal" journalist is declaring that "liberals have become unbearable" as they seek a "humorless void where nothing happens," and the public at large is now "fed up with snowflakery."

The stunning admission comes from Piers Morgan, a British journalist and TV personality who has been a judge on programs such as "Britain's Got Talent."

"Populism is rising because liberals have become unbearable, and I speak as a liberal," Morgan said during an interview with Ben Shapiro of Turning Point UK that was posted Monday on Twitter.

"In my core, I'm probably more liberal than not, although fundamentally, I see myself as a journalist, and I'd like to see both sides of all these things, and I can argue both. But liberals have become utterly, pathetically illiberal, and it's a massive problem."

When did @piersmorgan become so woke? pic.twitter.com/SaYmAMsA2g

What's the point in calling yourself a liberal if you don't allow anyone else to have a different view?

This snowflake culture that we now operate in, this victimhood culture -- you know, everyone has to think a certain way, behave a certain way. Everyone has to have a bleeding heart and tell you 20 things that are wrong with them.

I just think it's all completely skewed to an environment where everyone's offended by everything and no one's allowed to say a joke. If you said a joke 10 years ago that offended somebody, you can never host the Oscars. So now there's no host for anything. The Emmys now just said they're not gonna host either. So hosts have gone, and soon every award winner will go because everyone's a human and they're all flawed.

So no one can win award anymore because there will be no platform before they even get on the podium. So then, no hosts, no stars. Then no one can make any movies because we're all flawed. So, no actors. So suddenly, where are we?

The liberals get what they want, which is a humorless void where nothing happens, where no one dared do anything, or laugh about anything to behave in any way that doesn't suit their rigid way of leading a life. No thanks.

So why are we surprised? I'm not surprised. It doesn't mean that I agree with all of it, but it means I can understand it. And I understand why the liberals -- my side, if you like -- are getting it so horribly wrong.

Just last month, Morgan penned an opinion piece for Britain's Daily Mail, in which he said if President Donald Trump gets re-elected, it would be the result of this "radical, socialist, snowflake" mindset that has recently been personified by four female Democrats in Congress.

"Who would Donald Trump most like to face as Democrat nominee in the forthcoming 2020 election?" Morgan wrote.

"I'd hazard a guess it would be a young, female, screechy, super-woke, easily triggered radical socialist snowflake with a disdainful view of America.

"In fact, I can narrow it down more specifically to any one of the Squad -- the four newly elected firebrand Democratic congresswomen of color currently lighting up U.S. politics: Alexandria Ocasio-Cortez, Ilhan Omar, Rashida Tlaib and Ayanna S. Pressley."

Reaction to Morgan's new comments about liberals has been mostly positive: