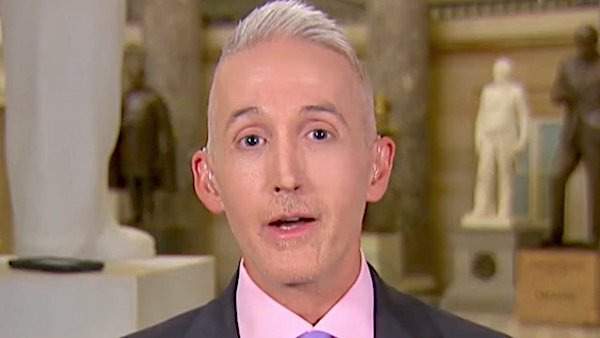 Former U.S. Rep. Trey Gowdy, R-S.C., is calling for the release of a document he says could be a "game-changer" in the scandal over Democratic claims that the 2016 Trump campaign colluded with Russia.

Top Barack Obama administration officials peddled the claims, including FBI Director James Comey, who leaked memos to the media to prompt a special counsel investigation. Robert Mueller's probe, however, concluded there was no collusion and declined to refer obstruction of justice charges.

On Sunday, Gowdy said in an interview with "Sunday Morning Futures" with Maria Bartiromo that a transcript of a conversation between an FBI informant and former Trump campaign adviser George Papadopoulos contains potentially exculpatory information.

Gowdy, who was chairman of the House Oversight Committee, said he was "clueless" as to why the documents have not been made public, because there is no information that could damage U.S. relationships with allies.

"It goes to a fundamental precept we have in this country. When there is exculpatory information, information that tends to show that a person did not commit a crime, that information is every bit as important" as any evidence that would suggest a crime," he said.

"Show us the transcripts. Show us the questions you coached the informants or the cooperating witnesses to ask of the Trump campaign officials. If it's not about the campaign, then you're right. But if you're veering over into the campaign or questions are not solely about Russia, then you've been misleading us for two years," said Gowdy.

BizPacReview reported Bartiromo pointed out that she spoke with Papadopoulos about the matter. The former Trump campaign adviser told her the FBI informant is Stefan Halper, a professor in London.

Halper questioned Papadopoulos about whether or not the Trump campaign would take help from Russia, mentioning the hacked Hillary Clinton emails obtained by WikiLeaks.

"It was in London," Bartirom said, "where Stefan Halper said something to him like, 'Well, you know Russia has all these emails of Hillary Clinton and you know, when they get out that will be really good for you, right? Would you help? That would be really good for you and the Trump campaign if all those emails got out, right?" Bartiromo said.

The transcript counters Democratic claims that the Trump campaign was willing to take help from Russia.

Gowdy said the transcript should have been entered as evidence in the FBI's application to the FISA court to obtain a warrant to spy on Trump campaign adviser Carter Page.