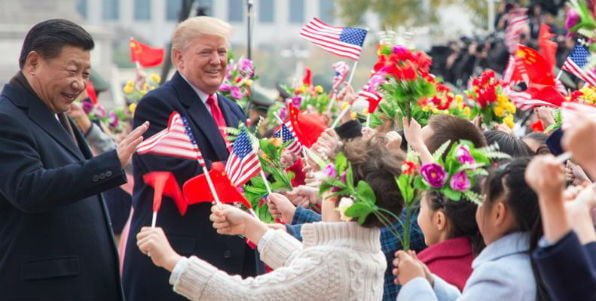 The communist Chinese government is moving troops to the border with Hong Kong amid a clash between protesters and police in riot gear at the enclave's main airport terminal Tuesday, according to President Trump.

Trump has been relatively quiet about the growing conflict as his administration attempts to persuade Beijing to return to the trade negotiating table through a series of tariffs that have escalated tensions between the two countries.

On Tuesday, Trump tweeted: "Our Intelligence has informed us that the Chinese Government is moving troops to the Border with Hong Kong. Everyone should be calm and safe!"

The protests, which have been ongoing for several months, were prompted by a bill to create an extradition treaty with the People's Republic of China. Hong Kong residents, under the "one country, two systems policy," enjoy liberties unavailable to their mainland neighbors. Opponents fear being tied to the communist nation's authoritarian judicial system.

A former British colony, Hong Kong was handed back to China in 1997 in compliance with a 1984 agreement between China and Britain. China agreed to govern Hong Kong under the "one country, two systems" principle in which the city would be given "a high degree of autonomy, except in foreign and defense affairs" for 50 years.